Fill Factor is a parameter most of us have ignored because there is no definitive way to calculate what the correct value should be. Part 1 of this series describes a new technique to dynamically determine index fill factors for all indexes within a database. Part 2 covers an analysis of the data collection and its results over a 3 month period as well as performance details and sections on performance, current limitations, and anticipated future improvements.

Frankly speaking, what happened is somewhat amazing. Using the “still experimental” methods that I explain in this article on a client’s system, the end result is that the overall database wait times showed improvement (decreases) of about 30%. That’s not a trivial improvement, and I hope this article will serve as an impetus for others to try these and other experiments on their indexes to come up with other improvements they might wish to share with the community at large.

Initially, this project started mainly as data collection to ascertain patterns in the index parametrics. As discussed in Part 1, sys.dm_db_index_physical_stats, sys.dm_db_index_operational_stats, sys.indexes, and sys.objects are used to gather parametrics for subsequent storage in the table [Admin].AgentIndexRebuilds. In this section, we will look at some of the patterns encountered.

The testing was done on a very active OLTP production database which we will call TestDB (to protect my client’s confidentiality). TestDB contains ~225gb of data (real data, not stored procedures, views, etc.), 249 tables, and 694 indexes in a 24x7 environment. There are few hard data deletes as most of the data is soft-deleted (DelFlag). Only 164 indexes exceeded the average fragmentation specification (1.2%) and were recorded within the AgentIndexRebuilds table (over a 3 month period). While each index’s pattern was examined, in the interest of brevity, we will only consider the following typical indexes (names changed to protect client):

The A_C index is a Clustered Index/Primary Key based on an identity column. Data is regularly added to it through the day (24 hours). Data collected for this index is shown below:

Missing data is from new columns added to table after data collection started. The value of 1 for New Page Split For Index was puzzling at first. Upon further investigation, it appears that after a rebuild it always starts with a value of 1. The bad news is that the “Page Split For Index” parameter yields both good and bad page splits. (A good explanation of good and bad page splits can be found at http://www.sqlballs.com/2012/08/how-to-find-bad-page-splits.html.) A little research indicates that extended events may be able to break out the bad page splits. Plotting out Current Fragmentation vs Fill Factor gives: 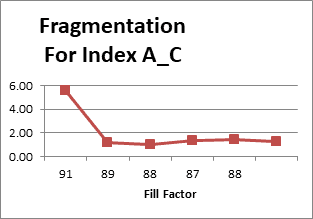 Looking at another clustered index B_C, this one is in a bridge table where rows are continuously inserted (out of order). Looking at the data we get: 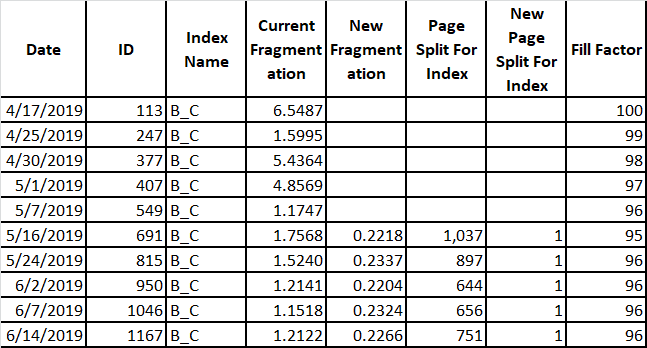 The missing data is from new columns added to table after data collection started. Plotting out Current Fragmentation vs date gives: 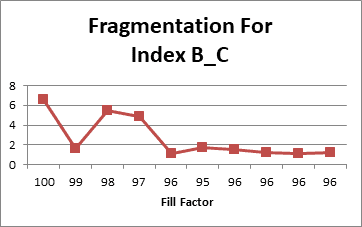 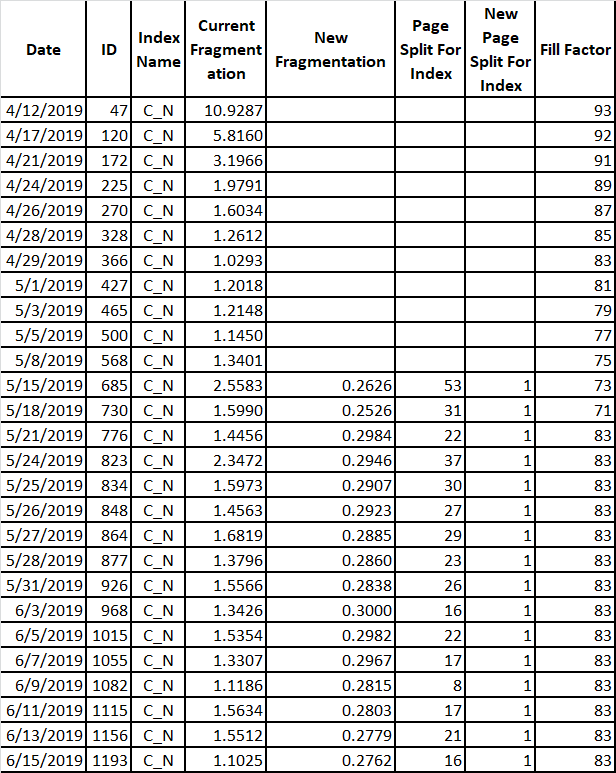 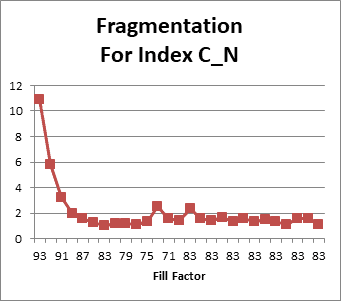 And finally, another non-clustered index example is D_N and collected data for it is shown below:

In this specific case, had the fix fill factor code been in place to catch the 4/28 case, the fill factor should have been set to 83. But you can see that it continues to decrease some. Not sure which is best, 83, 81, or 79, but at least we are in the ball park and the fill factor is not 100 as it started out to be. Looking at the graph for this index we get 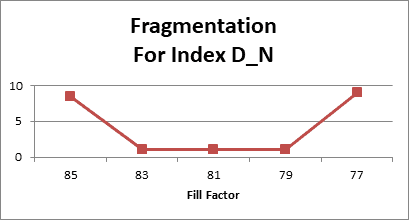 Obviously, the optimum fill factor for the current data is between 79-83%. In this particular case I would want to err on the bigger fill factor to reduce the number of logical IOs on the index. This is what the code currently does.

There are other instances (after studying Admin.AgentIndexRebuilds) that the code just doesn’t handle. I will eventually figure out what works, but now I review the table weekly to see what indexes the code is not catching.

For a short time, I considered using a least squares quadratic match to the data to determine best fill factor, but disregarded it to keep the current design as simple as it is.

Unfortunately I do not have hard numbers to measure performance improvements. But I did have some screen shots from the free version of DPA (Solarwinds Database Performance Analyzer).  The first was taken late Feb 2019

and the second from June 2019 (after 3 months of Fill Factor adjustment):

Notice that the vertical axis decreased from 500 seconds to 350 seconds (yes I am aware that these Screenshots were taken at different time of the day, but are representative of the entire day’s work). Each of the screen shots were very typical throughout the day for periods referenced. DPA showed an overall decrease in database wait times of about 30%. This is a significant number. I attribute it to 2 factors:

This code was developed and tested with SQL Server 2012 Enterprise Version. However, it is applicable to all versions of SQL Server from 2012 and upward. It can also be used for Standard Editions (same versions) except the WITH Statement in the Index Rebuilds needs to have the “ONLINE = ON, Data_Compression = ROW,” statement removed (3 occurrences). Data_Compression = ROW option can (and should be) retained in SS 2016, SP 2 and upward for Standard Edition.

In the event you are using Standard Edition consider scheduling this task when there is minimal database activity as without the ONLINE option you will have schema locking during the index rebuilds. Otherwise, there are no other restrictions that I am aware of.

This methodology is not complete, but does represent a start on determining fill factor. Hopefully, it will evolve (along with the community’s help) to represent a much better product than it currently is. Some of the features (not in any particular priority and not to be considered complete) that still need to addressed are:

This whole project started as a proof of concept and as most POCs made its way into production. While I agree that it’s not complete and isn’t perfect, it did result in a substantial decrease in wait time on a real system. It also demonstrates that effective automatic determination of Fill Factor IS possible.

My intention from the start was to make this available to the SQL Server Community without any restrictions. I look forward to constructive critique and suggestions, and hope that this methodology works its way into SQL Server mainstream.

Introduction So what’s all the fuss about Fill Factor? It is a SQL Server parameter I’ve ignored for 20+ years. The main reason was/is I’ve had no idea about what value to use. There is just no documented definitive guidance. Back in April at SQL Saturday #830 - Colorado Springs, I attended two sessions by […]