As I was preparing my presentation for the C# Corner SQL Server Virtual Conference, I came across (accidentally) a query plan that was unexpected. This plan had a suggested index that unfortunately supported that very unusual query plan. This article is not a “how you can do something better” one, but more of a starting point to discuss why the optimizer did what it did.

I look forward to your comments after reading (and maybe running the code on your computer). I’ve forward this code to Microsoft but have yet to receive acknowledgment or any discussion from them.

Let’s look at what I did and what the results were. For reference, this code was run on SQL Server 2019, CU8.

Using the AdventureWorks2017 database I ran the following query (with Include Actual Query Plan):

and I get the following execution plan (as expected) with a query cost of 0.54456:

and with a suggested index of:

Looking at the executionplan.xml (attached as Query1ExecutionPlan.xml) shows a missing index suggestion and an actual cpu time of 8ms. The statistics IO results were

If I apply the suggested index (as follows)

and then rerun the original query I get a strange looking query plan:

Hovering over the IndexSeek, I see these properties in the image below. With a Seek Predicate on Status and TerritoryID and a Predicate operation with ModifiedDate and a total query cost of 0.045771 with an actual cpu time = 3ms (from Query2ExecutionPlan.xml). What is interesting when inspecting the ExecutionPlan.xml is all the new Column References for Expr1008 through 1013 and their associated xml code. 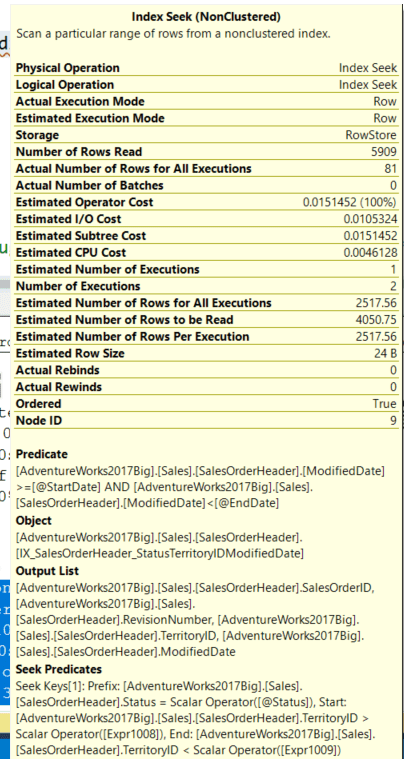 But what is all this other stuff shown below?

BTW, the extra query plan “stuff” is similar in content to what Pinal Dave found in his blog on un-necessary indexes.

That is one of the questions I am posing to you.

Any ideas on why this extra logic coding shows up?

and rerun the original query the query plan changes to what I originally expected:

My properties are shown below. With a Seek Predicate on Status and ModifiedDate and a Predicate operation with TerritoryID, a total query cost of 0.0200804, and with an actual cpu time = 2ms (from Query3ExecutionPlan.xml).

Notice that the query plan cost is about half of the original query plan with the suggested index and also the logical IOs dropped from 87 to 14. I am fairly sure that the optimizer took advantage of the ordering of ModifiedDate after the equality check of the Status column to achieve this performance increase.

For completeness, I want to try one more scenario. Let’s modify the index and keep Status and ModifiedDate in the index definition, but move TerritoryID to the INCLUDE clause as follows:

And now rerunning query (4) we get exactly what we had for Query 3:

With a Seek Predicate on Status and ModifiedDate and a Predicate operation with TerritoryID, a total query cost of 0.0200804, and with an actual cpu time = 2ms (from Query4ExecutionPlan.xml).

We all know that the query optimizer does not always give the perfect query plan, but just one that is adequate. The actual terminology comes from the ExecutionPlanXML: “StatementOptmEarlyAbortReason="GoodEnoughPlanFound"”  Since this is a relatively simple query with only one table I wonder why it “stopped short”

I welcome your comments. Let’s make this a collaborative effort.

Attached is the T-SQL script along with the QueryPlan.XML files for each of the four scenarios.

Introduction So what’s all the fuss about Fill Factor? It is a SQL Server parameter I’ve ignored for 20+ years. The main reason was/is I’ve had no idea about what value to use. There is just no documented definitive guidance. Back in April at SQL Saturday #830 - Colorado Springs, I attended two sessions by […]