In Part 1, we looked at a base query from AdventureWorks2012Big and varied column order in non-clustered indexes to determine effect on overall performance. In this session we are going to examine how a re-definition of the clustered index may also achieve performance gains – especially when there may be multiple SELECT queries having a common factor in their WHERE clause.

Consider the following report based queries from AdventureWorks2012Big (as described and modified in Part 1 of this series) with its original indexes (TSQL script attached):

Figure 1: Base Report Query (from Part 1)

Both of these queries use OrderDate within the WHERE clause and the second query also used SalesOrderID for the JOIN to the Customer and the SalesOrderDetailBig tables.

If we look at the size of the indexes for Sales.SalesOrderHeaderBig we get

Now applying the recommended indexes and looking at their sizes:

IX_SalesOrderHeaderBig_OrderDate gained 2mb with the INCLUDE clause and the new index added another almost 40mb. Now running the same 2 queries again (with the suggested nonclustered index), the first query yields

It’s well known that covering indexes can really help out a single query, but sometimes it pays to look elsewhere for overall database performance as well as possibly saving disk space.

The original combined Primary Key and Clustered Index was defined as

Let’s return SalesOrderHeaderBig back to its original indexes with

Figure 12: Restore Indexes back to Original

Note use of UNIQUE in the definition of the Clustered Index. If that wasn’t specified, SQL Server would have inserted an uniquifier as part of the clustered index definition. Separating the clustered index and primary key allows us to not have to re-define any Foreign Keys and also allows less complicated joins.

If we examine index sizes again we get

Since the nonclustered index on OrderDate is not really needed anymore the total size of the table with indexes is almost the same as the original indexes. Now let’s look at performance of the first query

with now a clustered index seek on CIX_SalesOrderHeaderBig_OrderDateSalesOrderID having a query plan cost of 83.0901, 3595 logical reads, and cpu = 640ms.

Results of all the above combinations of queries and indexes are summarized in the chart below: 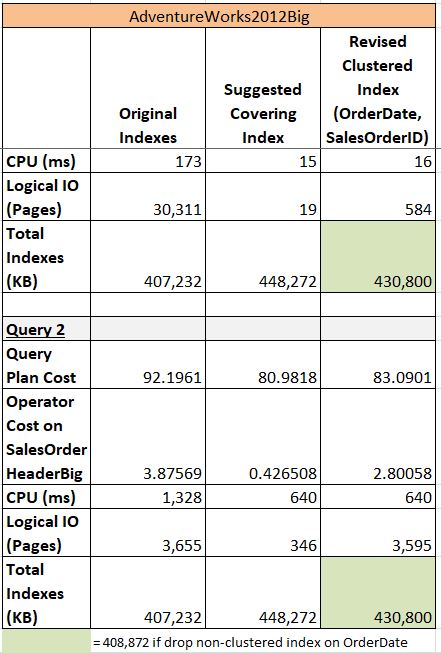 Obviously the suggested covering nonclustered indexes have the best performance for their specific query. In many cases when I am trying to remove near-duplicate indexes I try to make several indexes (with same first column definition) into a single overall covering index. This requires some testing because making a covering index too large (width) increases the logical IOs (more pages to define this index) and may defeat a performance gain. If you examine closely the modified clustered index data (now based on OrderDate) its performance is nearly as good as the covering index performance. If there are other queries that use OrderDate in their WHERE clause then they also can benefit from the revised clustered index. So, when confronted with a suggested index, try it, but also consider its cost in storage, IO requests, maintenance, and perhaps a revised clustered index might just be better when looking at the big picture. In any case, as Microsoft always says, TEST, TEST, TEST!

Sometime being a good DBA requires a delicate balancing act – do I create the perfect nonclustered index (for a single query), or do I create a large covering index for several queries, or can I still get adequate performance (and less storage space) revising a clustered index. There is no correct answer here, and the decision has to be made in the context of the table in question usage. Please consider this article as a starting point not only for initial table architecture, but also for existing table architecture.

I look forward to discussion on this topic and welcome any and all comments.