How To Find A Perfect Match

This article presents a script that finds a perfect match in any bipartite graph or shows why one cannot exist.

Recall that a bipartite graph is any undirected graph [1] where its nodes (or vertices) can be partitioned into two sets, and where edges only exist between those two sets. For this article, those sets are equal in size. 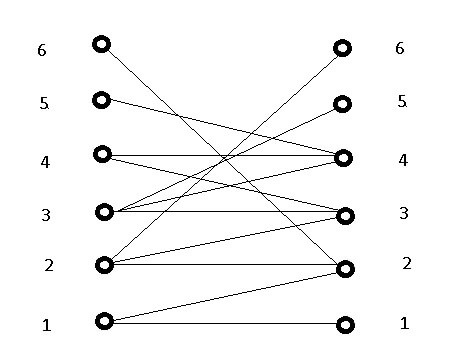 The goal is to find a perfect match, which is a collection of edges sharing no nodes and for which every node is part of some edge in that collection.

This script interprets a popular algorithm for finding perfect matchings [2] by first randomly selecting as many disjoint edges as possible until no more can be found: 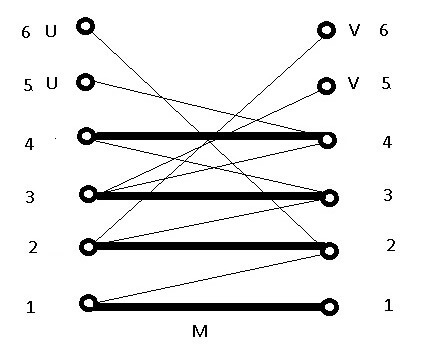 Here, four disjoint edges (in boldface) have been selected: (1,1), (2,2), (3,3), (4,4). Denoting this collection by M, the script will modify M repeatedly until it covers all nodes or show why it can’t be done. Note that if this algorithm fails to match at least half of all nodes, then no perfect matching exists. This follows from a simple counting argument on how many nodes would be available for building a perfect match.

More importantly, no edge connects nodes in U and V, otherwise the so-called greedy algorithm would have selected it.

Where do we go from here?

Consider the following two bipartite graphs Graph1 and Graph2, each with a partial match: 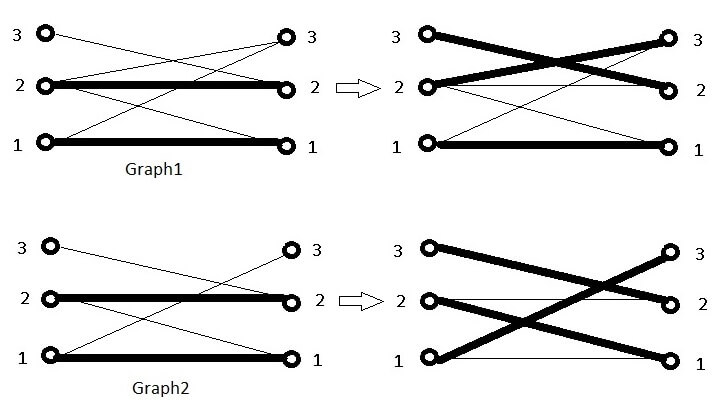 In the first graph there is a path of length 2 from U to M to M, namely [3,2,2], whose terminal node is connected by an edge to a node in V. Adding that edge to the path enables a bigger matching by alternately adding/deleting its edges to/from M. In the second graph no such path exists, but if we expand the original path [3,2,2] to [3,2,2,1,1] then a bigger matching may be obtained in the same way. This celebrated technique will be used by the script to find a bigger matching.

So, by this bit of inspiration, the next step is to document all paths of length 2 from U to M to M by first building the sets S and T containing their nodes in M. Each node involved in these paths saves its own path from U as an attribute: 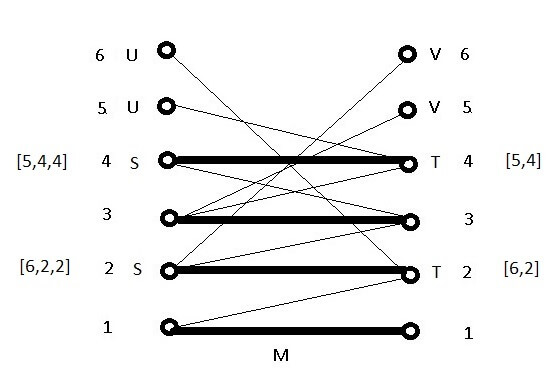 Clearly S and T have the same number of nodes. This construction, based on the current partial match, will be called the initialization of S.

After initialization of S, the script looks for an edge from S to V.

If a bigger matching cannot be found using the technique mentioned above, because no edge exists between S and V, then S and T will be expanded to admit longer paths. Hopefully, some new node in S will have an edge to V.

But if it finds an edge, say (2,6), then it has a path (in this case [6,2,2,6]) from U to V where its edges are alternately outside and inside M (starting at U and ending at V). The above technique will transform M into another matching with one more edge. This construction will be called the augmentation of M. Such paths are called “augmenting” because they can be used to augment M by alternately adding and deleting its edges to/from M to yield a different M with an extra edge: 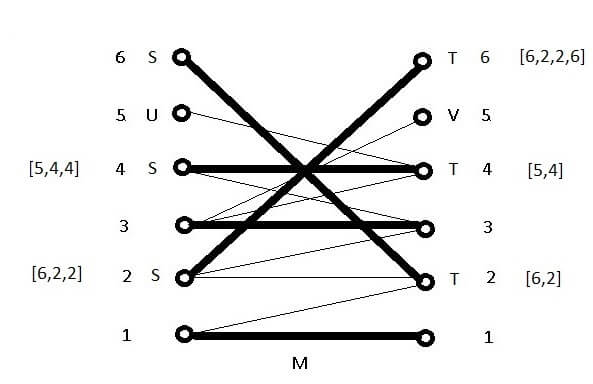 Now both U and V have one less node, and the new M has one more edge. But some paths stored by S and T will now be out of date since U has just lost a member. In particular, the path [6,2,2] for the left node 2 no longer starts from a member of U so augmentation won’t work using it. For that reason, S is always re-initialized by the script after a successful augmentation: 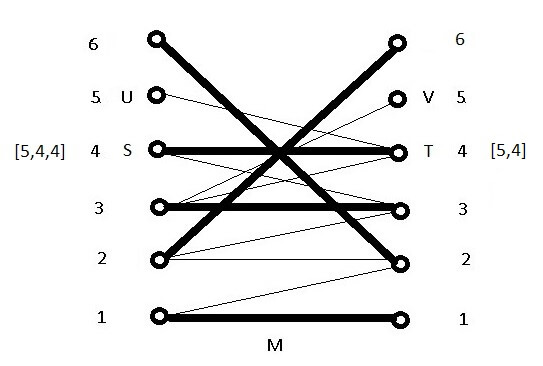 But now augmentation is not possible because no edge exists between S and V. At this point the script will attempt to expand S by finding all paths of length 2 from S to M to M outside of T in the hope that the terminal node of one of them will have an edge to V: 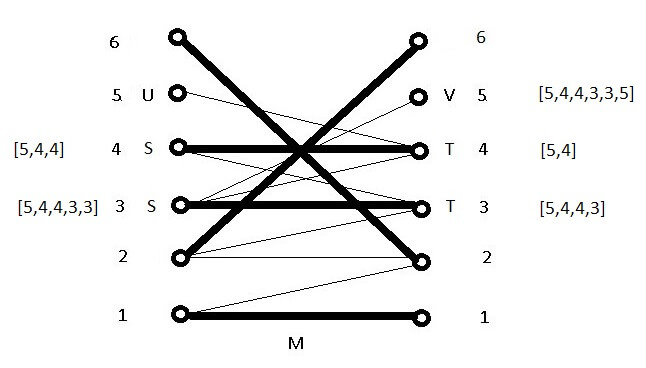 This technique will be called the expansion of S. Fortunately, after expansion, augmentation works here with the new path [5,4,4,3,3,5] from U to V to produce a new M, which is a perfect match: 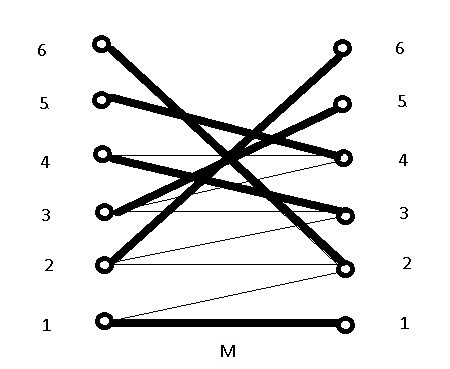 But suppose expanding S was not possible because the edge (4,3) didn’t exist. Then the neighbors of S would be exactly T (instead of a proper superset of T) because no edge exists between S and V since augmentation just failed! But then U and S will collectively contain more nodes than its neighbors since all edges from U must terminate in T, by construction. This would explain why no matching is possible.

Since the process of augmentation of M + initialization of S + expansion of S always expands M or S, it must eventually halt with either a perfect matching, or U and S will contain more nodes than its neighbors (preventing a perfect match).

Putting it all together, the script’s approach to find a perfect match is the following:

Suppose six pilots at a regional airline have each expressed their preferences for a co-pilot: 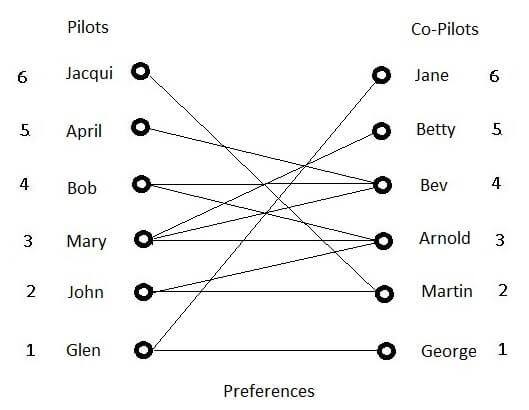 Can a perfect match be found, so that each pilot flies with a preferred co-pilot? The script shows why that’s not possible:

The four left nodes 2,4,5,6 collectively have three neighbors, so no match is possible. But if Jacqui relaxes her preferences and adds Jane to her preference list, then a perfect match exists: 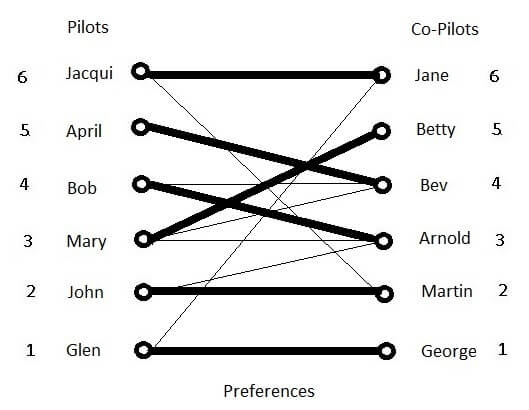 How The Script Works

The script attempts to set M to 1 for selected rows in Graph so that each left and right node appears exactly once in that selection (perfect match). For the above example, the table’s perfect match looks like this:

The stored procedures are simple. For example, spExpandM shows how the tables are modified when seeking to expand M:

The resource section contains a script to install the stored procs, along with the following test script to randomly generate bipartite graphs before seeking a perfect match:

For larger values of the first parameter, you’ll want smaller values of the second if you wish to find graphs with no perfect match. Note that processing a large graph with, say, 1000 left nodes may run for 15-30 minutes on a fast machine if the probability of edge creation is at least 25%. For small probabilities, expect a long run. Use the query SELECT count(*) FROM dbo.Graph WHERE M = 1 to monitor the script’s progress. Note that the expansion of M slows down as the script proceeds.

If you disable this command the script will use the current graph tables, so you can run it on your own data. For that reason, the proc spCheckBipartite is available to check that your data represents a bipartite graph with an equal number of left and right nodes.

Can a machine be trained to spot the reason for any graph with no perfect match? With infinitely-many randomly generated examples, there’s no shortage of training data.

Introduction This article shows how common table expressions (CTE) in SQL Server are naturally suited for navigating trees, such as finding its longest path, or diameter. Recall that a tree is an undirected graph where unique paths exist between any two nodes (i.e. vertices). Any node may be selected as its top node, with its […]

How To Avoid MERGE in SQL Server

Introduction This article shows how to script a basic merge between two tables, without using MERGE. This can be handy when you're merging a pair of tables with hundreds of columns, since the script doesn't know anything about them. This technique introduces and populates some auditing columns (IS_DELETED, IS_INSERTED, IS_UPDATED, TRANSACTION_DATE) for each record, and runs fast. […]

This article shows how to solve a gaps and islands problem using simple algebra.

In this article, we see how SQL can be used to determine matches between two groups, given a set of preferences.

Learn a little basic graph theory in this article that replaces a GROUP BY clause.