Vagrant and SQL Server 2017 on Linux

Hashicorp Vagrant  is a tool that allows the setup and configuration of a virtual machine to be scripted and also to trigger subsequent software configuration scripts. In this article I should like to take you through the steps I used to build a working SQL Server on Linux box on my home Windows PC.

If you have Powershell installed already you can check its version number and that of the installed .Net Frameworks by running the following commands.

On my PC these provide the results shown below.

Getting a Vagrant Virtual Box up and running

Vagrant provide an excellent "Getting started" guide based on "Vagrant: Up and Running" from O'Reilly. .  If you are not familiar with Vagrant then I recommend working through the tutorial at your leisure as it covers a wider range of capabilities than are needed here.

On my home machine I have a folder called "VirtualBoxes" in which I create a SQL2017 sub-folder.

This will download the online template for one of the many online Virtual Box definitions and fire it up on your Windows box.  If you start Oracle VirtualBox you will see that your new box will appear in the list of boxes on the left of the screen.

In the \VirtualBoxes\SQL2017 folder we will see some new entries one of which is called Vagrantfile. The Vagrantfile tells Vagrant how to build your virtual box and is heavily commented to help guide you through the configuration.

Having got the box up and running we must check to see if it meets the minimum requirements needed to install SQL Server 2017. From your windows operating system prompt type

This will start an ssh session from your PC to your new virtual box.  The command to check the OS version of our virtual box is run lbs_release -irc and the results are shown below.

As Ubuntu 16.04 is a minimum requirement for running SQL Server 2017 on Linux we must start to edit our VagrantFile.

The default box from the Vagrant tutorial is not sufficient for our needs so we must select a different one.  The publicly available boxes are listed at https://app.vagrantup.com/boxes/search.  From this list we can see that  ubuntu/xenial64 best meets our needs.

This time when we run lbs_release -irc from within an ssh session we get the results shown below.

At this point the working portion of our Vagrantfile is as follows: -

Configuring our box for SQL Server

There are a few settings we need to consider before we start installing SQL Server 2017. 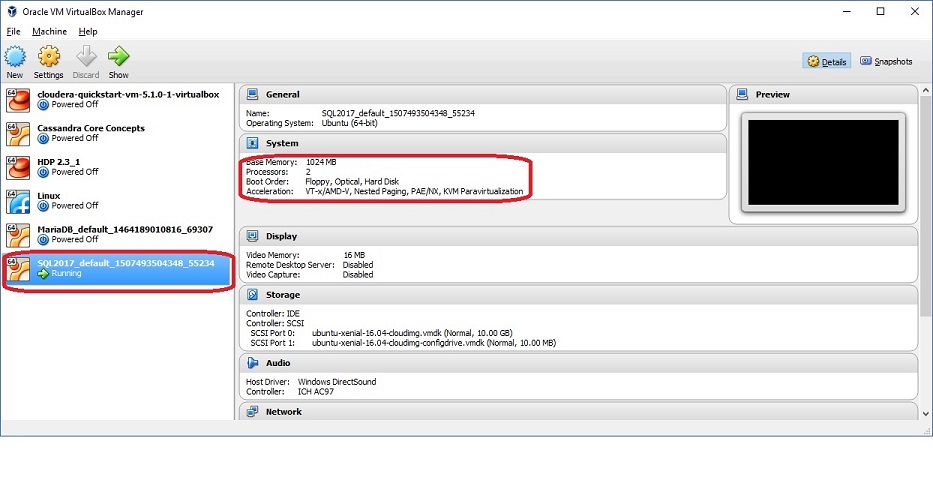 Choose the box, click on settings and then choose the Network option from the resulting left hand pane as shown below. 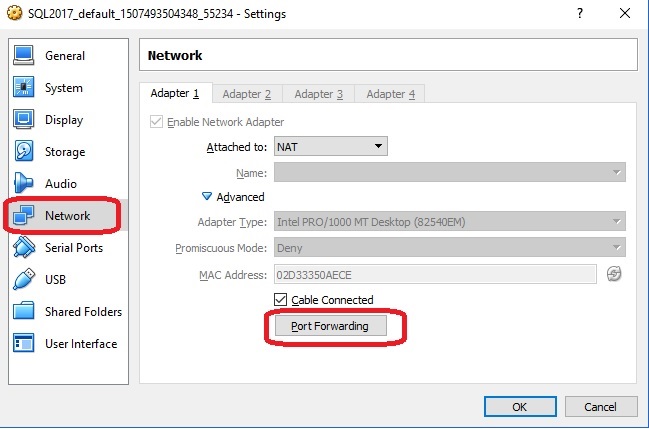 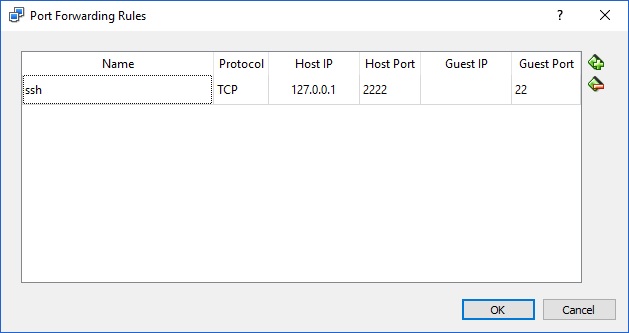 Of course we could alter these manually but we want a fully scripted box so will add some lines to the Vagrantfile.

By specifying the host_ip we are insisting that our VirtualBox is only accessible from our workstation.  Without the host_ip specification our new VirtualBox would be open to everyone on our network. The id: "Sql Server" is optional but I find it useful to have a meaningful description to appear in the "Name" column of the previous example dialogue box.

We need three lines adding to our Vagrantfile to alter memory.

By default the Virtual Box name will be the folder name plus the timestamp when it was created.  I prefer to give my box a specific name so abovethe vb.memory = 4096 line in the block above I enter the following

It is possible to configure a Vagrant box to be multiple boxes (web server & DB server).  In this example we simply want a single SQL Server 2017 instance so we can simply uncomment the line by removing the # character.

When we have finished the working portion of our Vagrantfile is as follows:

If we are not sure if we have edited the file correctly we can run vagrant validate from the command line.  To reconfigure our VirtualBox we simply run the following command 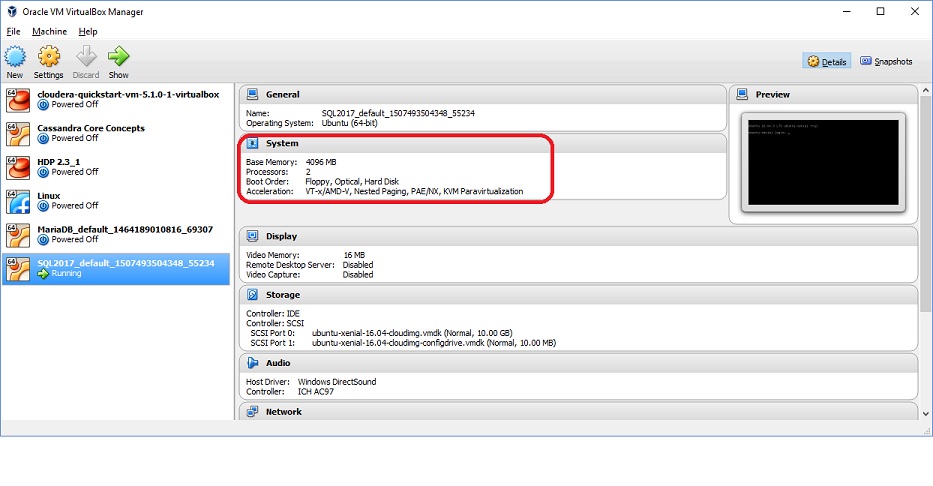 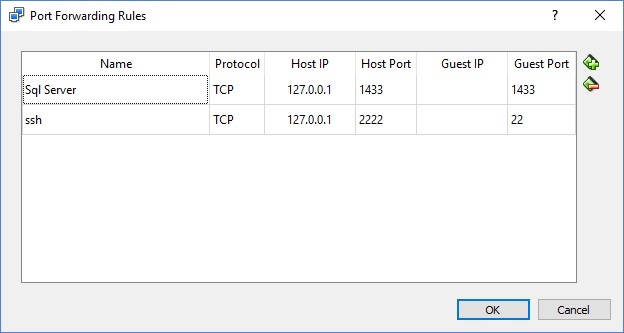 We now have our hardware provisioned from a script.  There is one more edit we need to make to our Vagrantfile and that is to tell it the script that we wish to run after the hardware has booted up successfully.

Above our final end statement we enter the following line

This tells Vagrant to run a shell script called install_mssql2017.sh on our Virtual box instance.  It is this script that will perform the actual install of SQL Server 2017.

For the purposes of this article our script is going to perform a simple unattended install of SQL Server 2017 including the command line tools on Ubuntu16.04. Once successful we will have a SQL Server 2017 instance on which we can do the following:

My first attempt was to copy the script from the Microsoft unattended install on Ubuntu documentation.  This needed some amendments as the script assumes that it would be run as the root user where as the default login for the Vagrant ubuntu/xenial box is "ubuntu".

The amendments were as follows. Replace the #!/bin/bash with sudo su. When the script runs this switches the Linux login to the super user which, by default is root. Change the line beginning MSSQL_SA_PASSWORD from

And changed them to

The final amendment was to add a line above the final echo Done! line so that the end of the file appears as follows:

This final amendment is important as it ensures that we connect using vagrant ssh we can run sqlcmd and bcp from any folder on our virtual box without having to specify the path to those binary files.

To get rid of our original Vagrant SQL2017 box we simply type vagrant destroy and answer the prompt to confirm that we do wish to get rid of the box. Running vagrant up will bring up our new box and run our SQL Server 2017 install.

Connecting to Our New SQL2017 box

This is just as we would connect to any other SQL Server box.  Earlier on we gave our box an IP address of 192.168.33.10 so we use that to connect using SSMS. 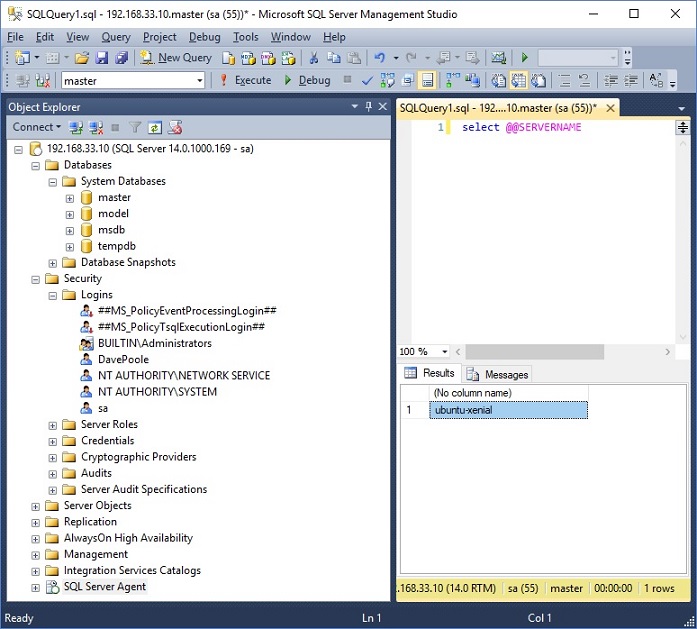 If you wanted to connect to the box by using a name then you could amend your hosts file as held on C:\Windows\System32\drivers\etc\hosts

What to do if the install does not appear to work

When I started to put together these instructions I had to work through a number of issues.  Earlier on I mentioned using the vagrant validate command to parse your Vagrantfile

As Vagrant tends to suppress error messages that have not originated from Vagrant itself I found the best way to debug the install_mssql2017.sh file was to comment out the line in the Vagrantfile to call it and then run the individual commands one at a time.  The parts that caught me out were as follows:

To begin with I was overambitious and tried to use SQLCMD and BCP as part of install_mssql2017.sh script.  This ran into issues because the install_mssql2017.sh script is not aware of the two commands and needs the full path to comands included in any use of them.  This is because subsequent session will make use of /etc/profile.d/mssql-tools.sh but not the current one.

With the benefit of hindsight I would keep the server setup separate from the deployment of a database and database artefacts.

The beauty of using Vagrant and VirtualBox is that we can build a ring fenced environment containing the software we wish to use on demand without compromising our work stations.  When we have finished we can simply stop or destroy our virtual instance knowing that a rebuild is simply a vagrant up command that will run in the time it takes to make a cup of coffee.

What we have achieved in this article is the equivalent of running setup.exe for SQL Server and accepting the default settings for all options.  The whole point was to produce a simple "kick the tyres" install.  It is a good starting point before moving on articles such as performance tuning and configuration on the Microsoft website.

Should we wish to learn other technologies there are a number of predefined VirtualBox templates to allow you to do so.  It is not just the open-source world that has grasped the benefit of easy-to-install software and basic but high quality online tutorials.  A number of proprietary software vendors produce VirtualBox or VMWare player images with their software pre-configured.  These can be downloaded and used legitimately for training purposes.

There has never been a better time to train for the job you want.

Have you ever wonder how to import flat files to SQL Server on Linux? In this article, I will share my experience loading data to a Linux SQL Server instance using the new Azure Data Studio data import extension from macOS.

Virtualization and the existential angst of the DBA

Tony Davis reflects on the existential angst felt by the DBA separated from his or her hardware.

Microsoft recently asked me to provide a summary of my experience with being part of a large-scale virtualization project. This was my response.

I need to setup a virtual environment for development and testing. I've heard about a new feature in Windows 7 and Windows Server 2008 R2 called boot from a virtual hard disk (VHD) which allows you to create multiple VHDs and select them from the boot menu on startup without having to partition your hard drive to achieve multi-boot. I have a need for SharePoint and SQL Server test and development environments. Can you provide the details of how to set this up?