I've been using tSQLt a bit to do some testing and one of the things I've tested is standards for code. I've been using a framework on top of tSQLt called SQLCop. These are a series of tests written to look for specific things. One of the items I do check is for sp_ named procedures. I've mostly gotten out of the habit of doing this, preferring spProcName, but at times I make a mistake in typing. This catches those simple errors.

You can Download the SQLCop tests and install them in your database after you've setup tSQLt. If you are using SQL Test, then you also get the SQLCop tests installed when you add the framework to a database. For me, I see the tests in the SSMS plugin. 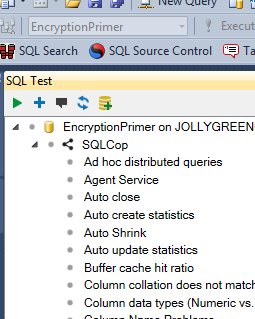 There are a lot of tests, but in this piece, I'll look at the Stored Procedures Named sp_ test.

If I edit the test, I see it's fairly simple code. I've included it here.

This code looks at the meta data in the database for an routines, stored procedures, that start with sp_ as part of their name. If any results are returned from the query, the IF statement will be true and the @output will be returned as part of the tSQLt.Fail call.

Let's write a stored procedure. If I do this:

This is a simple procedure. I wrote it, execute it a few times and be sure it's what I want. I've done basic testing, not let's check it before I commit it to VCS.

The easy way to execute all the SQLCop tests is to right click them in SQL Test and execute them. I can also use T-SQL to run tests. However since I just want to show this one, I'll right click it and select "Run Test". 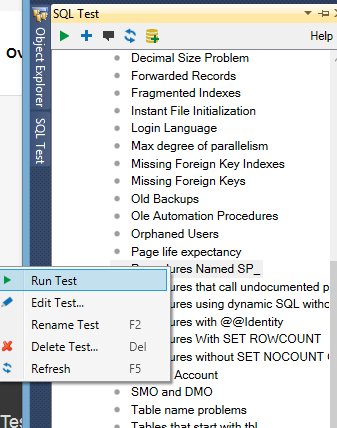 This runs the test selected. I can also run an entire class, or all tests, but clicking in the right spot. In this case, the test passes and I see a green mark.

This is a bad procedure for a variety of reasons, but let's execute my test. I see it fail, and a red mark appears next to my test.

In this case I also get a window from SQL Test popping up with more details. This contains the output from the test, which is also inserted into a table by the tSQLt framework.

Note that there is a URL with more information on this particular test. That is a part of the SQL Cop test code above. I could easily replace this with something particular to my environment if I chose.

At this point, I can rename the object, drop and recreate it, etc. to correct the issue. However running this test helps me to be sure I've gotten good code into the VCS. If I have this also run as a part of a CI process, it then prevents bad code from other developers appearing.

There are all sorts of SQLCop tests, and I'll write about more, but this is an easy one to implement to prevent a bad practice in your coding by a team of developers. Allowing each developer to test themselves, as well as an overall check by some CI process means that our code quality improves.

If I have other standards, I can even write my own tests to enforce them, which I'll do in another piece.

In this piece, Steve Jones shows how you can enforce a requirement of a Primary Key (PK) with a unit test, but also allow exceptions where needed.

In this article on tSQLt, learn how you can use the AssertResultSetsHaveSameMetaData method from the framework to enforce your API.

Get started testing your database code with the tSQLt framework.

Getting Started Testing Databases with tSQLt

There are several frameworks for assisting with the testing of SQL Server databases, but tSQLt is popular because it is written in TSQL and is simple for a database developer to set up and use. It doesn't get in the way. Rob Sheldon shows you how to get started.

This post will show the benefits of test-driven development and including automated SQL Server unit testing within your release pipeline. Even if you have a large code base and no existing unit tests, you can start introducing tests now to make your database code more robust to change.