I’ve intended this stairway to appeal to a range of expertise and knowledge levels about SQL Server. Some of what I describe will seem obvious to you but I aim to add information that will be new to even experienced DBAs or database developers: After all, some of the information surprised me. I will, however, be assuming a reasonable working knowledge of database objects and other types of metadata; in other words, what a view, table, function, procedure, schema, constraint and so on actually is.

In the first level, I explained what information is provided by SQL Server to access the metadata for your database, why it was there, and how you’d use it. I ended up by showing you how to find out the names of all the various database objects in the database. In the second part, I chose the topic of triggers because it is a database object that provides a good example of the sort of questions that come up, and the way that you can explore the metadata to answer those questions.

We will now tackle indexes, not just because they are important, but because they are a good example of a type of metadata, like a column or distribution statistic, that isn’t treated as an object within the metadata.

Indexes are absolutely essential to any relational database table. However, like butter on toast, it is possible to overdo them and thereby create a source of problems in databases. Sometimes you can over-index or under-index a table, or build duplicate indexes. Sometimes it is a matter of choosing a bad fillfactor, setting the ignore_dup_key option wrongly, creating an index that never gets used (but has to be maintained), missing indexes on foreign keys, or having a GUID as part of a primary key. In short, indexes in any busy database systems need regular maintenance and verification, and the catalog views are one of the most obvious way of doing these chores.

What indexes have you got?

So let’s start with a simple report on the indexes in your database, as in the following query.

Here are my results. Yours, of course, will vary. 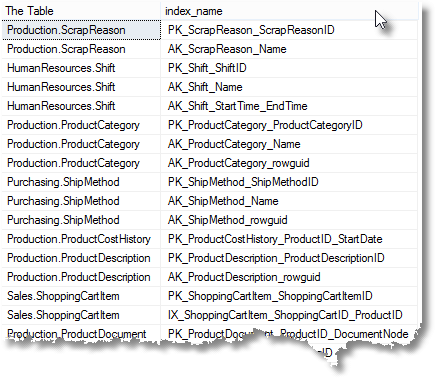 This query, as with many others in this stairway, are of more practical use if you filter on one or more specific tables. You could, for example append this…

How many indexes does each table have, with a list of their names

The previous report isn’t entirely useful as you cannot see at a glance how many indexes each table has, and what they are. This will do the trick

I’ve tested it on an aging version of the old pubs sample database because it doesn’t have ridiculously long object names.

Finding tables without a clustered index

There is a lot of interesting things you can find out about indexes. Here, for example, is a quick way of finding tables without clustered indexes (heaps)

How many rows in each index?

By linking with the sys.partitions view, we can find out the approximate number of rows in the index. I’ve included some code at the end that joins with sys.extended_properties just to pull out any comments attached to these indexes.

And you can vary this to tell you simply how many rows each table has, based on the rows in the indexes for that table

Are there a lot of indexes in any table?

The final line ‘WHERE indexes>columns/2 AND indexes>4;’ needs to be changed as required to meet your criteria for ‘a lot of indexes’

Indexes updated but not read

It is always worth finding out which indexes haven’t been used since the server was last started, especially if the server has been doing a wide variety of work. There can be a good reason for an index not being used since a restart, as when it is useful only for end-of-month reporting.

(Note that we’ve used the dynamic management view sys.dm_db_index_usage_stats here which collects the usage information. We’ll discuss this object, and other related ones, in more detail later, but for the time being just admire it.)

How much space are these indexes taking?

I wonder how much space these indexes are taking up. It is worth checking a fat index where a lot of columns are used, or included, in an index as it is possible that the column values aren’t actually specified in any query. 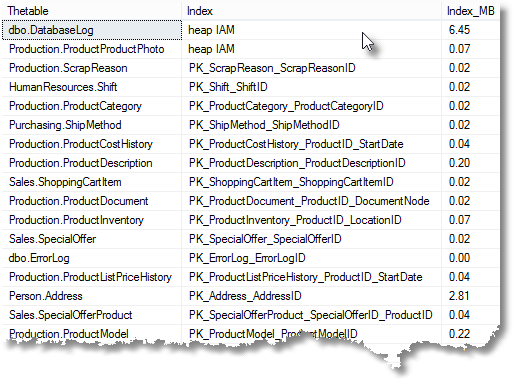 How do I calculate the total index space per table.

Let’s see what the total index space is for each table, along with the number of rows in the table. 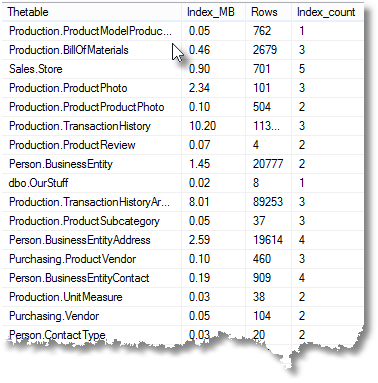 How do I discover the various ways that tables are using indexes?

In order to discover certain properties about your indexes, it is often better to use property functions as a shortcut.

What is, and isn’t an object?

You have probably noticed something odd. Although some of the properties of tables, such as their primary keys, are objects in their own right, this isn’t true of columns, statistics or indexes. Let’s just get this clear, because it isn’t entirely intuitive: In sys.objects, you can find the basic standard details about all the common database components, such as tables, views, synonyms, foreign keys, check constraints, key constraints, default constraints, service queues, triggers and procedures. All these components that I’ve listed have additional attributes that have to be made visible through views that inherit the relevant basic attributes, but also include the data columns that are pertinent to the object. It is better to use these special views because they have all the information you need and the system filters just the type of object that you’re interested in, such as a table. Various objects, such as constraints and triggers, have a parent_ID in the sys.objects table that is non-zero, showing that they are child objects.

The following query shows you a simple way of viewing these child objects and relate them to their parents. 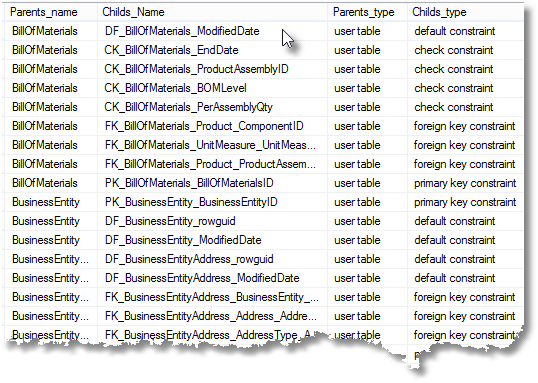 You’ll see that indexes just aren’t objects. In our first query, the object_ID that we returned was the ID of the table on which the index was defined.

How do I simply get to see all the columns, for all the indexes, for every table?

The simplest way of establishing what indexes are on a table and the columns referenced, in order, is to use a query that joins between sys.tables, sys.indexes and sys.index_columns. 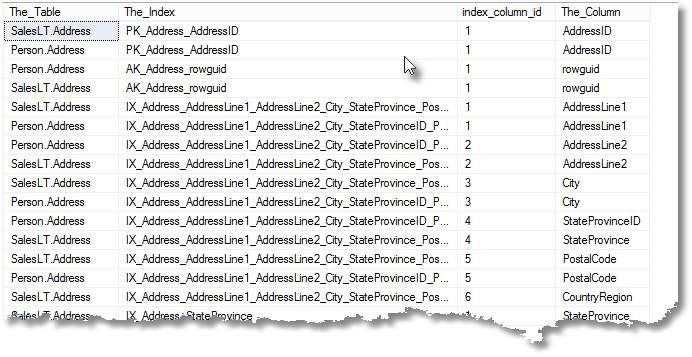 This will be more useful to you once you filter for a particular table. E.g.

What columns are in my indexes, and in what order?

We can do better than the previous query and have a line for each table, listing out all the indexes, and for each index, a list of its columns. This is easier for a busy programmer to scan by eye. 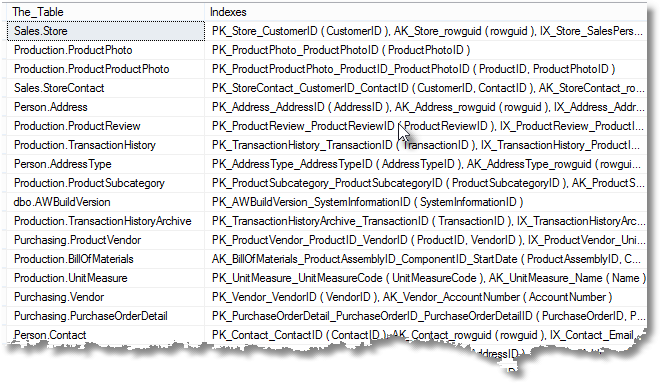 How can I view my XML indexes?

XML indexes are treated as an extension to indexes. I find that the best way of viewing their details is to construct a CREATE statement for them.

The results of the query above will show you all the essential XML index details as a build script.

Are there other types of index stored in the metadata?

For the time being, let’s just end up our exploration of indexes by dealing with the topic of distribution statistics or ‘stats’. Every index has a statistics object attached to it in order to help the query optimiser come up with a decent query plan. To do this, it needs to estimate the ‘cardinality’ of the data to determine how many rows will be returned for any index value, and it uses these ‘stats’ objects to tell it how the data is distributed.

You can see what stats objects are associated with your tables in your database from a query like this:

You’ll see that, when they are associated with an index, statistics inherit the name of the index, and use the same columns as that index. 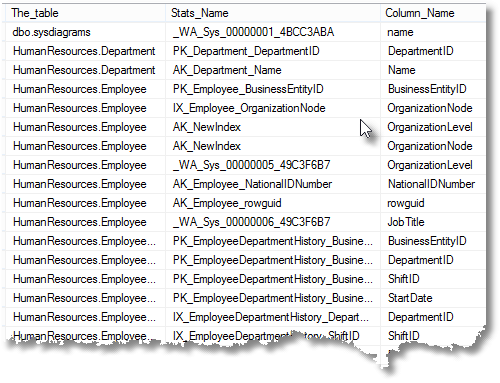 You can quickly see if you have more than one statistic for the same column or set of columns just by comparing the list of column numbers that each statistic is associated with.

There is a lot of information available on indexes that is useful to the database programmer. Once the number of tables in a database gets large, it is very easy to let a table slip in that has something wrong, such as inadvertently having no clustered index or primary key, or that has duplicatedindexes or unnecessary statistics. Once you are familiar with the basic ways of querying the catalog views, it becomes quicker to run a query to get information than to use the SQL Server Management Studio.

In this level, I’ll introduce Extended Properties. As with the previous levels, I want to illustrate as much as possible with practical and immediately useful code.

Idempotence is the property of certain operations in mathematics and computer science, that can be applied multiple times without changing the result beyond the first time they are run. When you are making changes to a database to deploy a new version, you need to be sure that certain changes aren’t made twice, or in the wrong order.

Now that we've explored, in preceding levels, some of the information that is available about indexes, triggers, keys and distribution statistics, we can concentrate on the tables themselves and their columns.

Business Intelligence Architect, Analysis Services Maestro, and author Bill Pearson introduces the DAX ALLEXCEPT() function, discussing its syntax, uses and operation. He then provides hands-on exposure to ALLEXCEPT(), focusing largely upon its most popular use in removing filters from all columns in a table - except the filters we specify.

Business Intelligence Architect, Analysis Services Maestro, and author Bill Pearson introduces the DAX ALLSELECTED() function, discussing its syntax, uses and operation. He then provides hands-on exposure to ALLSELECTED(), focusing largely upon its most popular use in supporting “visual totals” in Power BI.