We live in a virtualized world, and VMware VMDKs are common for hosting SQL Server in many organizations.   Accessing databases in a VMDK, however, to support clonable SQL Server database images is not well documented.   A relatively simple solution is to mount the VMDK to a Windows server as a virtual disk, to provide access to the VMDK databases.

This article looks at the steps involved in mounting VMDK’s to a Windows host, and then building clonable SQL Server images, using SQL Server containers.    The same steps, however, should support PowerShell or Red Gate SQL Clone.

Options for mounting VMDKs to Windows 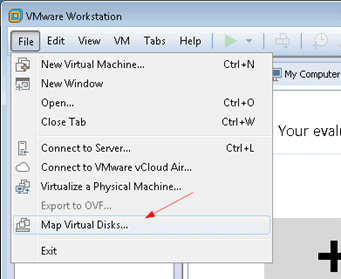 For automated process support a command line utility “vmware-mount” is available via the vSphere Disk Development Kit (VDDK), which is available for free download from Vmware.  To mount a VMDK file to drive X, with the VMDK located in C:\temp, in read-only mode, use the following syntax:

A third option is OSFMount, a free image mounting tool for ISO images and VMDK files.   OSFMount has a good reputation, although there are reported issues with image certificate signing on Windows Server 2016. 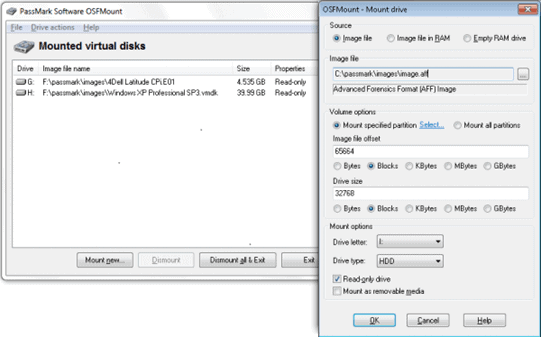 Available VMDK’s are generally backups or snapshots of production systems. The VMDK is mounted to the Windows host as a separate drive in read only mode to expose the VMDK folder structure.   Once mounted the database files are copied to a Windows Virtual Hard Drive (VHD) on a separate disk (step 2).  Once the image is built, the source VMDK can be unmounted and deleted, and database clones are served to containers and instances (Step 3).

The Windows VHD is built on a separate attached disk to enable the removal of the mounted VMDK.   The new VHD is a full byte copy of the database environment, and delivers clones that are lightweight (<40 MB each) with full read/write suppport.  Images can scale to support scores of databases, and multiple Terabytes.  Windocks allows for the VHD to be located in an arbitrary directory using the following configuration setting.

A dockerfile defines the SQL Server release, and the databases that are copied from the VMDK to the VHD.  Each database occupies a separate line in the dockerfile with a SETUPCLONING RAW command.  A network mounted VMDK would require relative file paths.   Build time scripts are included with the COPY and corresponding RUN command.

The image is built with the >docker build -t <imagename> \path\to\dockerfile.   Run time scripts are included below the ENV USE_DOCKERFILE_TO_CREATE_CONTAINER=1.  In the example, a Git clone command clones a source repo into the container’s \scripts folder, and a powershell script creates a consolidated migration script.

The combination of the Git clone and orderscripts.ps1 ensures that each container is delivered with a clone of the repo, with an ordered migration script.

This combination provides developers access database clones sourced from the VMDK, as well as scripts cloned from a source repo, with a concatenated (ordered) migration script.   Developers, or a CI pipeline controls which of the scripts are applied at run time with the following docker command syntax.   Alternatively, the source repo can be cloned and scripts applied manually with SSMS or any SQL Server client.

Database clones are growing rapidly in popularity, as they enable secure use of production databases for dev/test, in seconds.  Combined with data masking and encryption clones provide a secure near production environments.  Clones enhance development by surfacing performance and data issues earlier than when working with development databases built from source.   When working in a complex environment composed of multiple databases, clones are dramatically faster to provision than multiple database builds.

VMDK’s are often the easiest path for accessing production databases, and the methods outlined here provide a simple and repeatable process for database cloning.   To explore the use of VMDK’s as a source for database clones with SQL server containers download the free Windocks Community Edition at https://windocks.com/community-docker-windows

Learn how you can ensure that scripts are executed in a specific order with Git and PowerShell for use in a Docker container.

In this article, see one of the ways in which a container can be created and used for in SSRS as the source for reports.

The second part of this series focuses on the advantages of Service Broker over other messaged-based technologies to introduce asynchronous message processing into your database applications.

Working with others can be a challenge. This Friday's poll asks for those little annoyances in the workplace and how to deal with them.