The Basics of Cryptology, Part 2

In the first article of this series, we introduced the SQL Encryption Toolkit, which provides extended stored procedures for SQL Server 2000 to perform basic cryptographic functions using the Blowfish and AES encryption algorithms. In the second article, we discussed the history of cryptography and the basics of modern cryptography.

In this, the third and final installment, we will take a look at the how a modern cryptographic algorithm does its job. This article will provide a basic overview of the mathematical theory behind modern encryption, and it will provide links to detailed documents that describe the precise mathematical models and functions used.

A "Bit" About Math and Logic

A bit is the smallest unit of data that modern computers can operate on. Cryptographic input is viewed by the cryptographic algorithm as blocks (or streams, in some instances) of bits. The algorithm's job is to scramble the input bits sufficiently to make them unrecoverable until they are run through the decryption process with a proper decryption key. 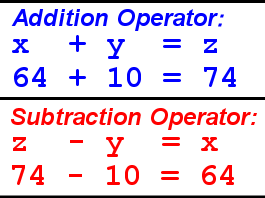 Likewise, Multiplication (*) is the inverse of Division(/).

In addition to the basic math operators above, the Exclusive OR logical operator (

) (commonly abbreviated "XOR", "EXOR" or "EOR") is often used in cryptography. XOR is formally defined as the "bit-wise exclusive disjunction operator." In plain English, this means that any two bits that are XOR'd together, will result in "1" if, and only if, one of the two bits is a "1." If both bits are "0" or both bits are "1", the result of XOR is "0."

XOR is quite useful in cryptography for another reason. It just happens to be its own inverse. As an example, say we are given the hexadecimal number 0xF0, and we perform an XOR with 0xCC. We’ll demonstrate the operation with bits:

To get our original value back, we simply XOR the result of the previous XOR operation with 0xCC again:

Because of this property, XOR is extremely useful in obscuring and recovering our plain text.

Another set of operations commonly used in encryption are the bit shift operators. The bit shift family of operators includes the "shift left" and "shift right" operations, which shift a row of bits to the right or left:

Figure 4. Right-shifting a row of bits.

Putting it all together we can turn our plain text into a nicely jumbled, but easily reversible, mess. However, with just our plain text, encryption key and these operators we still haven't eliminated patterns from our encrypted text. These patterns that occur are the basis of "codebook attacks" and other reverse-engineering methods. So how do we get rid of patterns in our encrypted data?

In the last article we looked at the distribution of letters in written English. Because some letters occur more frequently than others, several methods have been developed to reverse-engineer the output of simple ciphers.

Substitution Boxes, or S-Boxes as they are commonly known, are arrays of bytes that obscure the relationship between our plain text and our encrypted text via simple substitutions. S-Boxes perform a function known as "confusion."

The S-Box confusion operation in the example simply substitutes our 8 bits with another set of 8 bits from the S-Box lookup table. But just replacing all occurrences of one byte with another byte still leaves the frequency of occurrence clearly visible to cryptanalysts out there.

To handle the frequency of occurrence problem, we turn to "diffusion." Diffusion is a method designed to eliminate statistical patterns from our input data. Some cryptographic algorithms like DES use Permutation Boxes, or P-Boxes, to re-order bits during encryption. Other algorithms, like AES, perform row-shifting and column-mixing steps to provide diffusion.

So, to put it all together, we end up with an encryption algorithm like the Advanced Encryption Standard (AES/Rijndael). Here is an AES sample that demonstrates the end result of all this knowledge: 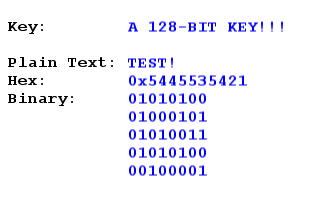 Since AES encrypts blocks of 16 bytes, our algorithm automatically pads the plain text with 11 bytes. Per FIPS padding specifications, we pad with 10 zeroes plus the count of padding characters (10) in the last byte. Here is our encrypted message: 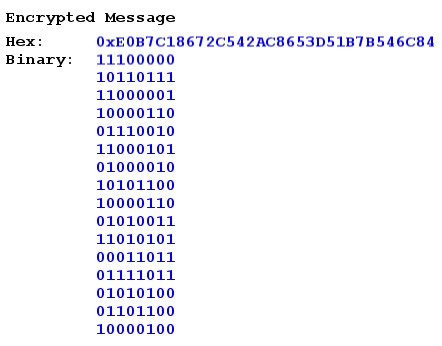 As can be seen, the original message, "TEST!" has now been thoroughly encrypted by the AES algorithm. Notice that, even though the 6th through the 15th bytes are nothing more than a string of zeroes, thanks to diffusion, there is no discernable pattern that would clue a cryptanalyst in to this fact.

This is the final part of a three part series on Cryptography. In this article we touched on the inner workings of cryptographic algorithms and the operations that make it all possible.

AES and Blowfish Encryption are both available in the SQL Encryption Toolkit.

Jon shows you several ways you can parse XML.

Andy says it's not the greatest book for preparing for the 70-100 exam, but the case study is worth reading for it's explanation of the Microsoft Solution Framework. Read the full review!

Learn the basics of ADO.Net in this article by Andrew Phillips.

Andy starts a new series about Worst Practices - come find out why and read about the first one on his list - using Hungarian Notation for column names!