What is an Execution Plan?

The query optimizer is a component of SQL Server that analyzes the information of a query and the statistics available about the underlying tables, indexes and indexed views. The statistics allow the query to compare the number of rows in a table to the unique values in an index to determine which indexes will reduce the cost of a query.

The optimizer uses the statistics to create several different plans. Each plan is a step-by-step document of the operations and the sequence of those operations that can be performed for one possible means of returning the results of a query. The different plans may try using different indexes, seeks versus scans (more on seeks and scans in Part 3), different types of joins (again, check out Part 3 for more on joins), and operations in different sequences in order to find the optimal plan.

Next, the optimizer assigns a relative cost for both I/O and processing for each operation. It then sums the cost of each operation to produce a total cost for each plan. After producing several different execution plans, it then selects the plan with the lowest total cost and then uses that plan to execute the query. It is important to keep in mind that these costs are relative values calculated by the optimizer and cannot be compared to any real values (such as CPU and I/O time) at the completion of execution.

Once an execution plan is selected by the optimizer, it is stored in cache. The next time the query is executed, the optimizer will look in cache to see if it contains a plan for the query. If a plan is found, it will use it to execute the query, saving the time of creating new estimated plans.

There are two types of execution plans: estimated and actual. The estimated plan is calculated by the query optimizer prior to execution; it represents what the optimizer believes will be the lowest cost plan. It can typically be returned to the user in a matter of seconds. The actual plan, on the other hand, is the actual steps that were executed to process the query. The  actual plan is returned to the user after the completion of the query. At times, some of the estimated and actual values may be different. The values are the quantitative data provided in an execution plan. See Figure 1 for an example of several of the plan values.

Why do estimated and actual plans values differ?

There are three reasons why plan values may differ. 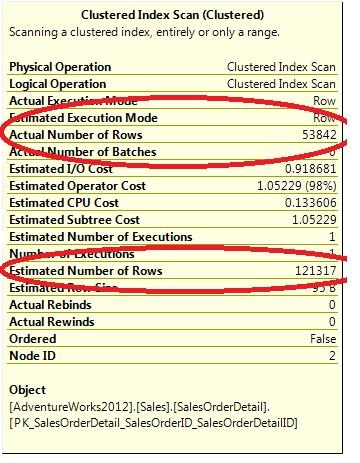 Which Plan Is Better?

An estimated plan can be returned almost immediately, whereas an actual plan cannot. The actual plan gives a more complete picture, but when supporting a production environment, waiting for a long-running statement to complete in order to get the actual plan is not always practical.

As an alternative to getting the actual number of rows, you can check the last time the statistics on the indexes for a table were updated. This information combined with your knowledge of the activity that takes place on the database will give you good indication of the staleness of the statistics. The following query can be run on the sys.indexes table to return the last date that the statistics were updated:

Other Information Only Found On Actual Plans

Actual Rewinds and Rebinds are values that only apply to a handful of operators. These values count the number of times certain operators are initialized. A large number of initializations may cause a high I/O usage. For a more complete coverage of the topic, see Grant Fritchey’s book SQL Server Execution Plans.

The estimated plan includes estimated costs, which would logically lead to the conclusion that the actual plan should contain actual costs. However, this is not the case. As was mentioned earlier, cost is merely a calculated number that gives a relative indication of how expensive (in time) an operation will be. It cannot not be compared to any real values such as CPU and I/O time.

Graphical execution plans show the details of all the operations and their sequence that will be (or were for actual plans) used to execute a query. This makes them an excellent tool for analyzing and optimizing slow-running queries. Estimated and actual execution plans both have their advantages and drawbacks. Each is more appropriate under certain circumstances. Read Parts 2 and 3 of this series for more information on graphical execution plans.

Getting the Most out of Statistics

Statistics keep track of our data and will tell SQL Server how to make the best optimization decisions. Knowing how they work can make understanding query and performance problems much easier!

Keeping in mind the importance of the cache mechanism, how could one get the plans and their usage statistics in SQL Server?