Welcome to the Spotlight Behind SQL Server, a new series from SQLServerCentral.com. As we've grown and spent more time covering SQL Server, we've slowly gained a number of contacts inside Microsoft, including those that develop the product. And we decided to try and interview the SQL Server people inside Microsoft. There are lots of people working on SQL Server 2005 and our goal to is to eventually get to them all.

I didn't understand much of Rob Zare's Analysis Services talk at the 2007 Microsoft BI Conference, but it was a great speech and it seemed those with more experience really enjoyed it. He definitely knows SSAS inside and out and will be my go-to-guy for questions.

SSC : What's your official title and responsibility at Microsoft?

SSC : What part of SQL Server 2005 did you enjoy working on?

SSC : What are the big changes (in your opinion) in SSAS05 that people will really find useful?

Rob :2005 represents a sea change for Analysis Services, and literally everything has been rewritten (core engine, APIs, and tools). That said, the revised model for a cube (attribute-based dimensions, multiple fact tables, perspectives, translations, MDX scripts, etc...) combined with the DSV (data source view) as a customizable abstraction layer is where I would start on the OLAP side. Data mining in Analysis Services has likewise taken a major leap forward with the introduction of mining structures, five new algorithms, and a greatly enhanced tool set.

SSC : It seemed that the SSAS engine changed dramatically from SQL Server 2000 to SQL Server 2005. Will there be as much change in Katmai?

Rob : No, certainly not. The changes being made to Analysis Services for the 2008 release are not nearly on the scale as those that were made for the 2005 release, which was essentially a rewrite from the ground up. This is a more targeted release, focused on further realizing potential of the major changes we made to the platform in 2005.

SSC : How much do you match features or try to exceed other products' features and how much do you look to extend the reach of OLAP with each version?

Rob :We primarily focus on our customers, the market and where we think it's heading, and what we can do to realize our vision of bringing BI to the masses. In practice, progress is not linear on all fronts as each release will have several themes, around which our focus will be based. As an example, 2005 saw us make great progress in the general arena of enterprise capabilities, but say less so with ease of use. Each release is ultimately a balancing act.

SSC : Any good resources or links to help DBAs and developers get into the SSAS BI World if they have no experience?

Rob : I would start here: http://www.microsoft.com/sql/solutions/bi/default.mspx. There are links to webcasts and whitepapers from this page. The tutorial that ships with the product is a great way to get hands-on instruction in the product.

SSC : I've been kind of a less-than-enthusiastic proponent of BI in the past, mainly because I think it's a niche and it's a difficult area for most IT people to understand. How long did it take you to get comfortable with MDX, cubes, dimensions, measures, etc.?

Rob : Well, I'm far from objective since I've spent most of my professional career in the BI space

. Having said that, I more or less instantly saw the value in exposing a business-centric model that could be queried with user-friendly tools and deliver near-instant results. However, getting my head around MDX and more generally learning to "think multi-dimensionally" certainly took some time and effort. In retrospect, focusing on BI from the beginning made things easier to me since I didn't have to make a big shift in paradigm, tools, or technology.

SSC : How much interaction or contact do you have with real world customers in the development of each release?

Rob : We engage with our customers at all stages in the development cycle. We have frequent customer visits and calls which our design and usability team often coordinate. In addition to this, we interact with customers via events like PASS and TechEd, newsgroups, and the TAP (Technology Adoption Program).

SSC : Is there a usability lab for the SSAS/SSRS/SSIS subssystems of SQL Server? Do you actually examine how people interact with the product?

Rob : We have several usability labs on campus and a dedicated design and usability team. We work closely with design and usability to understand the impact of changes we make to the product. For example, we often begin releases by creating baseline usability studies, focused on a particular product area or usage scenario. During the design phase, we'll often validate design ideas with users via prototypes, wire frames, etc… Once we settle on a design, we'll once again do usability testing, this time comparing the results to the original baseline.

SSC : How long have you been working on SQL Server?

SSC : Give us a little background on yourself, how did you get into computers?

Rob : I've been interested in computers since I convinced my father to buy me an Atari 400. I'm embarrassed to say that I never did much with it, but it definitely started the interest. More generally, I've been interested in technology, particularly the design or human component of technology for about as long as I can remember. To this day I love to analyze human-computer/human-machine interfaces and think about why they were designed as they were

SSC : Did you see yourself as a programmer/developer/computer guy when you were growing up?

Rob : None of the above. I saw myself as a student, which is still how I think of myself today.

Rob : I actually went to three colleges: UMASS Amherst, the University of Texas at Austin, and the University of Washington in this order. My degree was actually in business, after no small amount of vacillation between philosophy and economics. I started out, incidentally, in engineering but quickly became frustrated with the lack of electives. I'm biased in that I think a traditional, liberal arts education should be the foundation upon which a specialized area of study is placed.

SSC : East Coast, South, or West Coast: which did you enjoy the most?

Rob : Having grown-up on the East Coast (D.C. and Boston areas), I'm partial to the albeit slight differences in the way people interact with one another there. Having said that, I greatly prefer the natural environment of the West Coast, and I don't see myself leaving anytime soon. I only lived in the South for a couple of years, and while I enjoyed it, I would pick either coast over it in order have an ocean nearby.

Rob : I actually live in Issaquah, which is about 15 miles east of Seattle, and a similar distance south east of Redmond. I love living in Issaquah because it's super low key, quiet, and close to the mountains.

SSC : Who's the most fun to work with at Microsoft?

Rob : Lots of people—this is certainly one of the best things about working here. I work with some very interesting people, who also have very diverse backgrounds and experiences.

SSC : We've all heard stories of some characters at Microsoft. Any interesting ones that stunned you or surprised you when you first went to work in Redmond?

Rob : Mosha Pasumansky and Sasha Berger. Mosha was responsible for our calc engine while Sasha owned storage. The guys are very close and have a long history, but both have tempers and neither was afraid to express their opinions…loudly?. Needless to say, the first time I found myself in the middle of one of those ‘discussions', I was at a loss for words. Another guy used to keep his office super dark, had lots of cool gadgets with multi-colored lights blinking, and a penchant for playing techno music most of the day. Stepping into his office was always a bit surreal--you'd half expect a bouncer to show-up and ask you for some money.

Rob : My favorite gadget that I own is my smart phone. I'm still really impressed with how well it works and how powerful it is. I'm looking forward to seeing more device consolidation. Specifically, I'd like to see my phone become a great music player and a GPS device in addition to everything it does now. I'm not sure if this qualifies as a gadget, but I would very much like to have a super slim/cool form factor Vista system in my living room to store all my music and record TV programs. 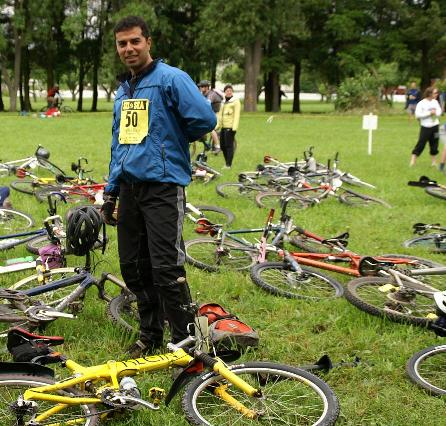 SSC : What does Rob like to do when he's not working on SQL Server?

Rob : I love to mountain bike. I also like to hike/climb/swim; pretty much anything that involves being outside is fine by me. I also spend a lot of my free time with my family (two uncles + their families in the area), girlfriend, and/or at home doing not much of anything.

SSC : Where's the best place you've ever been mountain biking?

Rob : The non-lift accessed trails in and around Whistler BC are some of the nicest, most fun to ride trails I've ever ridden. I've never been, but the interior of British Columbia (places like Kamloops, Nelson, and Vernon) look to have excellent trails as well.

SSC : What's BI to you? It seems that it's become a catch-all term without a great definition.

Rob : That's a tough one indeed since as you mention, there are a lot of different takes on what BI means and/or encompasses. In essence, BI to me is about gaining insight via analysis of data. I don't think it matters what technologies or methodology you use, or who does the analysis (machines or humans) so long as you're able to achieve this goal.

SSC : Where can people see you speak in the coming year?

Rob : I may be at PASS in September (not confirmed yet). Nothing scheduled after that as of now.

The guys that build software rarely get exposure of credit. Maybe that's why so many of them turn to open source where they get more well known. After a meeting at TechEd 2005, Andy Warren had the chance to get some interesting interview questions answered by Brooke Philpott, one of the 2 core developers of sqlSentry. And not a marketing guy.

Database geeks are all around us. I met Gary Mallow on the email list of a cycling group run by a local church. After some conversation, I discovered that he is a director of a group of developers who build applications, sometimes using .NET and often using Oracle as a database. Like me, Gary is not entirely comfortable with his ability as a UI developer, and so finds database work a good fit.

Continuing on an interview with Raj Gill, SQL Server 2005 Roadshow Presenter by Robert Pearl. Get inside the mind of the co-founder of Scalability Experts.

On The Road Again...Part I

An interesting interview with Raj Gill, SQL Server 2005 Roadshow Presenter by Robert Pearl. Get inside the mind of the co-founder of Scalability Experts.

Who builds SQL Server? It's an interesting collection of individuals and we're looking to bring you some profiles of them all. In the first installment of this series Steve Jones interviews Euan Garden, longtime member of the team.