Monitoring the Number of Connections

When it comes to monitoring SQL Server there are a lot of metrics available to us - hundreds! In practice while we monitor quite a few, we rely on a handful to help us understand the current and long term health of a server. My goal today is to make the case for monitoring the number of connections as one of those key metrics.

In the world of SQL Server a connection is what is allows an application or user to authenticate, submit queries, and receive results. Connections are somewhat expensive to open and they require an ongoing memory allocation so we’re going to prefer a lower connection count (and well short of the maximum of 32767 per instance).

Let’s start by looking at our options for monitoring the connect count. You have two choices; you can query a system DMV or use the perfmon counter called “User Connections” (which is also available from a DMV). The user connections counter refers to connections that are not system connections. My view is that as long as you use the same counter or query consistently it doesn’t matter a lot whether system connections are included.

Here’s a query to retrieve the perfmon counter from within SQL. Right now I have a whopping total of 5 connections open.

We can see the results here:

You also get it via Performance Monitor directly by looking at these counters. 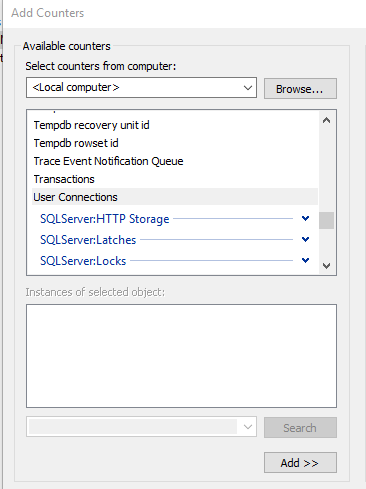 If I plot them, I'll see the count over time. 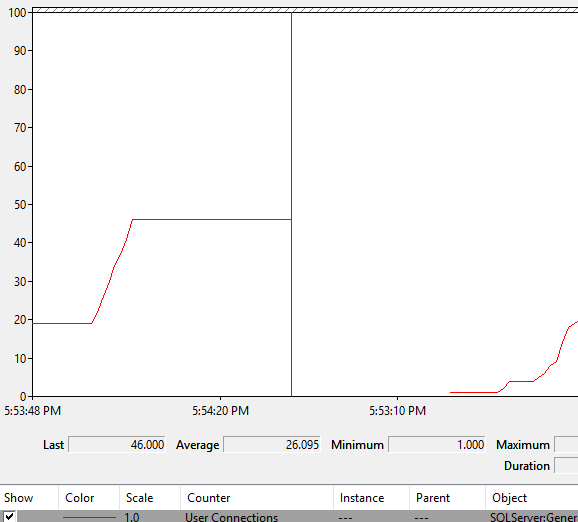 If you prefer a more SQL-centric view of things, you can get the number of user connections with this query:

This result set contains a number of columns, which can help you troubleshoot any issues.

If you’re not familiar with using Perfmon or the sys.dm_exec_connections DMV it’s worth taking a few minutes to see what values you have on your local/development machine. Open a few new query windows in SSMS and watch the count increase.

Note: If you don’t see the counters in Perfmon it is because SQL Server isn’t installed on that machine or because something is amiss with the counters. See this post for details on how to fix the counters.

There is no “magic number” that indicates a problem. On one system I monitor I have a low severity alert if the count goes over 1000 connections and a high severity alert if it goes over 1500. Most days it runs just under that 1000 level and I’d expect to see it cross over and back a couple of times on busy days. If it stays over 1000 for more than few minutes I want to dig in to see why. If it’s over 2000 we’re having a really bad day.

One point to consider if you monitor connection count is that you will eventually find value in knowing where the connections are coming from, both by server and by application. Perfmon won’t give you that answer, you have to get it from SQL, but that doesn’t mean you have to track it all the time, you can just go look if the overall count crosses whatever threshold you’ve set. Sometimes you’ll find it’s one server or one application that is causing the issue.

Wrapping up, think of the connection count as a general health indicator that is baselined to that instance. It won’t tell you what is wrong, but it can signal that there is something that needs attention before it gets worse.

Andrew Zanevsky shares his trace-scrubbing procedures that make it easy for you to handle large trace files and aggregate transactions by type–even when captured T-SQL code has variations.

SQL Server Profiler is a veritable treasure trove when it comes to helping DBAs optimize their T-SQL code. But, the surfeit of riches (I'm reminded of the Arabian Nights tale of Aladdin) can be overwhelming. I recently had one of those "sinking" feelings when I first tried to make sense of the enormous amount of data collected by traces on a client's servers. At this particular client, the online transactions processing system executes more than 4 million database transactions per hour. That means that even a 30-minute trace that captures "SQL Batch Completed" events results in a table with 2 million rows. Of course, it's simply impractical to process so many records without some automation, and even selecting the longest or most expensive transactions doesn't necessarily help in identifying bottlenecks. After all, short transactions can be the culprits of poor performance when executed thousands of times per minute.