Once you have finished the development of Analysis Services project, there are several methods available for deploying analysis services objects from one server to other server. In this series, we will discuss the most commonly used deployment methods one by one. This article covers deployment using BIDS. The entire series covers deployment using:

In this mode you will be using an offline project file to make changes to SSAS objects. To work in this mode, go to File -> Open -> Project/Solution as shown in the figure below and then navigate to the location where your project file is stored and click ok. 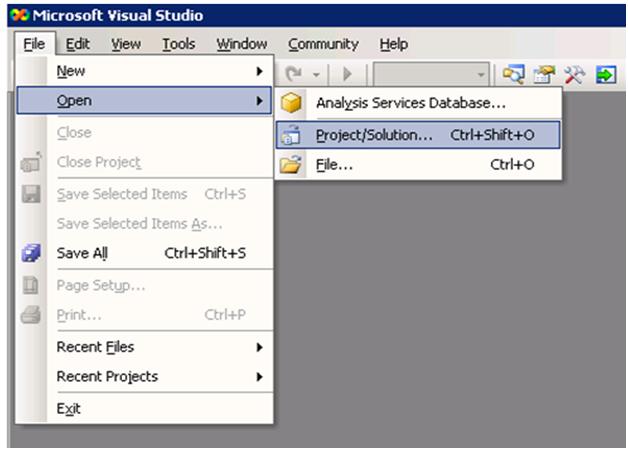 After making the required changes, you can deploy those changes to the target server by right-clicking the project name in solution explorer and selecting Deploy as shown below in figure 2. BIDS will detect the differences between the objects in the project file and those that exist on the Analysis Services server and then apply those differences to Analysis Services server. 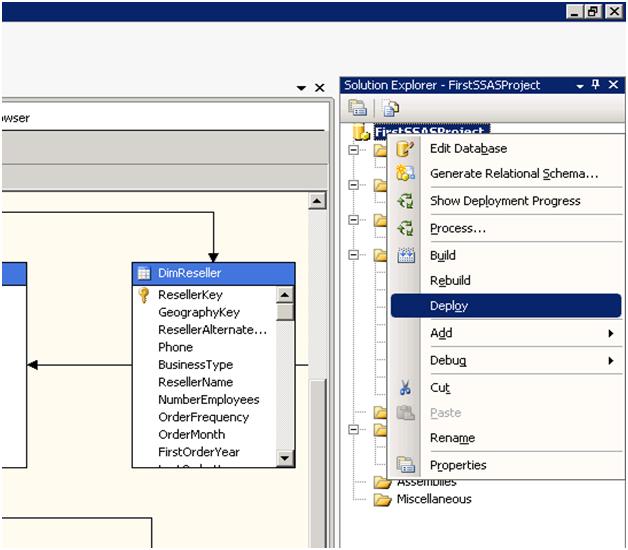 Before deploying the project, you will need to configure the deploynment settings.  To do so, right-click the project name in solution explorer and select the properties option. The properties dialog box appears as shown below in figure 3. 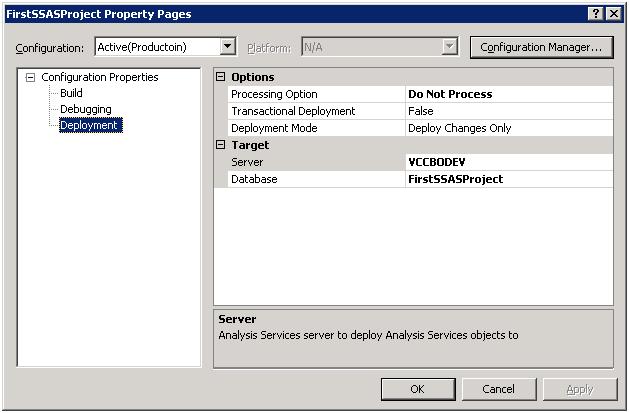 Let’s go through the settings/options:

This option specifies how the changes are deployed.  If the Deploy Changes Only option is selected, only the changes are deployed to the target server. In other words, BIDS will detect the differences between the objects in the project file and those that exist on the Analysis Services server and then deploy only those differences. .  If the Deploy All option is selected, then all the objects will be deployed.

This is the name of the target server.

This is the name of the target database.

In this mode, you are directly connected to the analysis services database and as the name indicates, changes are committed as soon as the object is saved. Obviously, this method is not recommended. Please note that this mode can only be used after you have completed an initial deployment.

To work in this mode, go to File -> Open -> Analysis Services Database as shown in the figure below. 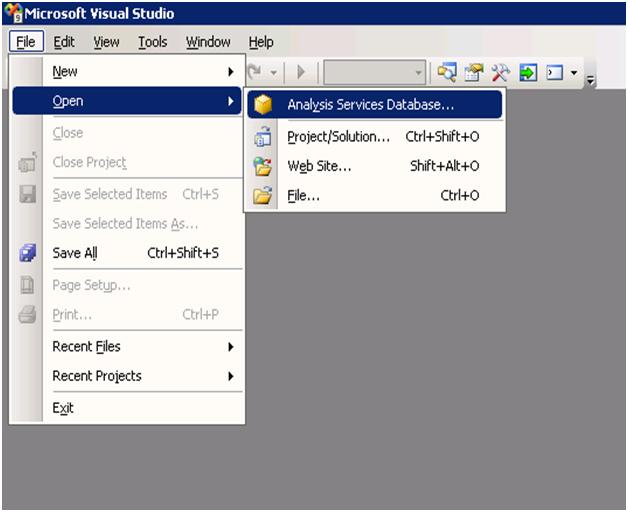 The Connect To Database dialog box appears as shown below in figure 5. Enter the analysis server and database name to which you want to connect as shown in the figure below. When you click OK, BIDS will create a project file under the location specified in the dialog box. 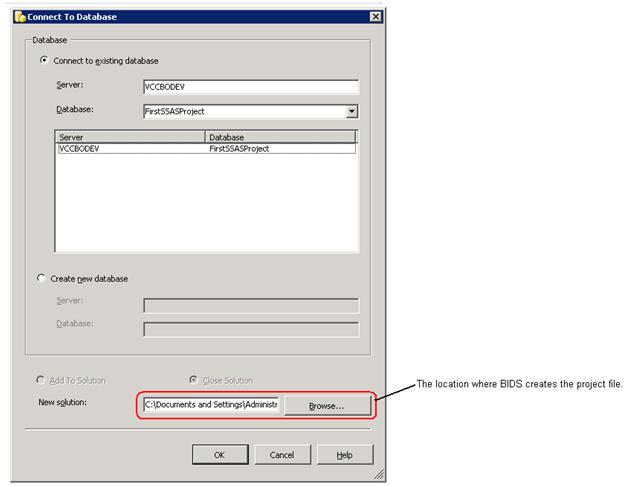 This problem can be fixed by re-importing (re-engineering) the analysis services database into a new project file as follows:

This will launch the Import Analysis Services Database Wizard. At the welcome dialog box, click next. The source database dialog box appears next as shown below in figure 9. Type in the name of the Analysis server and the database you want to import into new project file, and click next. 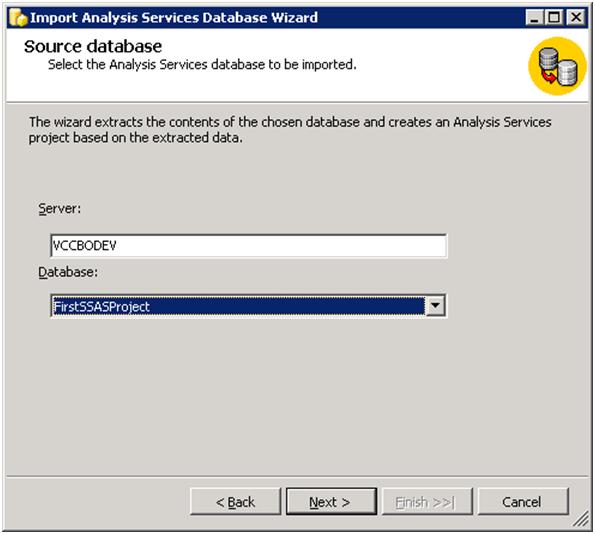 The wizard will now read all the analysis services objects form the database as shown in the figure below and will create a new project file. Click finish and you are done. 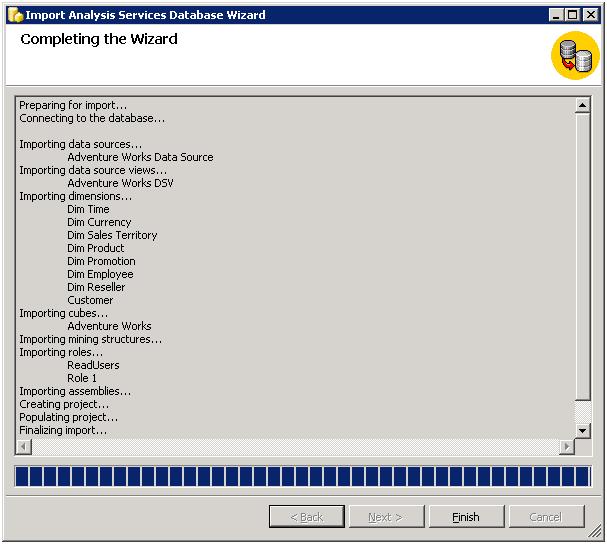 TIP: In BIDS, you can visually identify which mode you are working in by just looking at the tab name you are in as shown in the two figures below.

When to use BIDS

Use this method when you need to deploy an analysis services database to your local server (development or Test server) or when you want to deploy everything in the AS database (Partitions, Security etc). You are less likely to use this method when promoting your AS database from a Test server to Production server. Why? Because in most of the shops, you will find that security is QUITE different in Test and Production servers and unfortunately, BIDS provides no granularity and overwrites everything on the destination server.

In this article, we will return to a function we introduced in an earlier article, CROSSJOIN(), whose mission it is to combine two sets of dimension members into one. We will discuss how CROSSJOIN() works in general, and then discuss how its performance can become an issue in medium to large-sized data sets. We will then undertake a multiple-step practice example intended to assist us in gaining an understanding of the issues, before exposing approaches to minimizing the performance overhead that we can encounter in using CROSSJOIN() to reach our reporting and analysis needs.

This is the twenty-fifth article of the series, MDX Essentials. The series is designed to provide hands-on application of the fundamentals of the Multidimensional Expressions (MDX) language, with each tutorial progressively adding features designed to meet specific real-world needs.

SQL Server Analysis Services includes the ability to capture information about every query run against a cube. Author Ramunas Balukonis showed us last time how to query this data. This time he brings us a method of interperting which dimensions are actually be used in satifying Analysis Services queries.

This is the twenty-fourth article of the series, MDX Essentials. The series is designed to provide hands-on application of the fundamentals of the Multidimensional Expressions (MDX) language, with each tutorial progressively adding features designed to meet specific real-world needs.

SQL Server is an amazing business intelligence platforum, including many tools that other vendors force you to buy separately. New Author Ramunas Balukonis is working with this platform and has built a system that helps him perform analysis on just what his Analysis Server is doing.