Logshipping to SQL Server on Linux

After installing a SQL Server on Linux, the next logical step is the migration of databases to the new instance. I usually use SQL Server log shipping for migration purposes as that helps me to reduce the maintenance window and database downtime. I use the following 2 stages process.

The first part of this is preparation which doesn’t incur any downtime:

If a migrated database is tiny in size, you probably don’t need to follow this process. In this case a simple backup and restore process will be applicable. In real life, we often have to deal with huge databases in a production environment, and we have a tiny maintenance window.

Note. In order to make my example more realistic, I treat the tiny database in a test environment as a huge production database. In real life I would choose backup and restore method for this particular database.

The second stage is the actual migration, and it does incur some downtime. I usually follow the following process for at this stage:

As you can see the process described above is designed to minimize downtime during the database migration. That is very common requirement for a business to reduce application downtime during any planned maintenance. 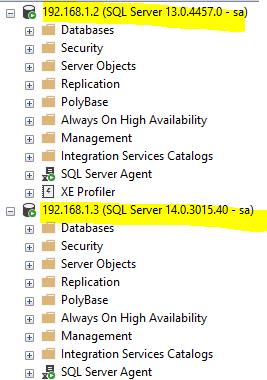 Note. Before continuing with the process you need to make sure that you have a samba client installed on your Linux box. Also your Linux box must support cifs and that feature must be installed and enabled. Cifs will allow you to mount a Windows share as a network drive on a Linux box.

First we need to create a directory, which we will share on our Linux box. I have created the directory “logshipping” in the directory “/opt/microsoft/”. I used the command “mkdir”. How that was done is shown on the screenshot below.

In order to configure the Samba server on the Linux box, we need to edit “/etc/samba/smb.conf” and restart the samba service. In my experiment, I used “vi” as the editor for the Samba configuration file and restarted the Samba service using the command “sudo service smb restart”.

The configuration file for my samba server is shown on the screenshot below. 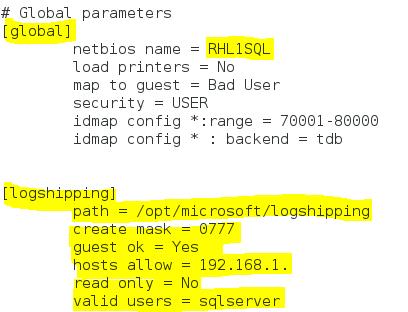 I shared the directory “/opt/microsoft/logshipping” with the resource name “logshipping”. I also granted to all the users from the subnet “192.168.1.” the read and write permissions in that directory. That is probably not the most secusqlservre option but it did work. Anyway I don’t have an AD controller in my laboratory environment so it was the only option in my particular case. If you do this in production environment please contact your Linux administrator(s) in order to make sure that your changes won’t compromise your server security.

Then I created a samba user for my Linux account “sqlserver” as it was shown on the screenshot below.

Note that on the RedHat Linux you need to configure security context for the shared directory as it is shown below. Otherwise the operating system prevents network access to the directory.

If firewall is enabled on your Linux box you must configure it in order to allow other computers in the network communicate with the samba server. That can be done for example using the command “sudo firewall-cmd –add-service=samba --permanent”. Do not forget to bounce firewall and samba services after configuring the firewall.

When everything was done I checked my Linux share from the Windows box.

I created a text file in the shared folder in order to make sure that I have write permissions on the shared directory from my Windows box. 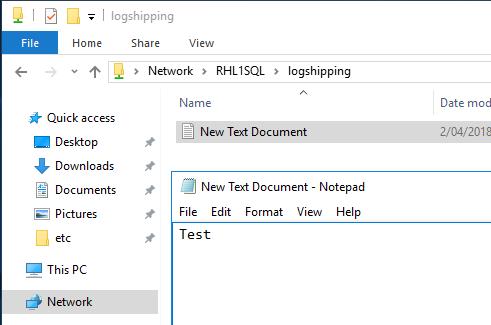 Firstly, I took a full backup of the test database from my SQL Server 2016 instance on Windows. For this purpose I used SQL Server Management Studio as it is shown in the screenshot. 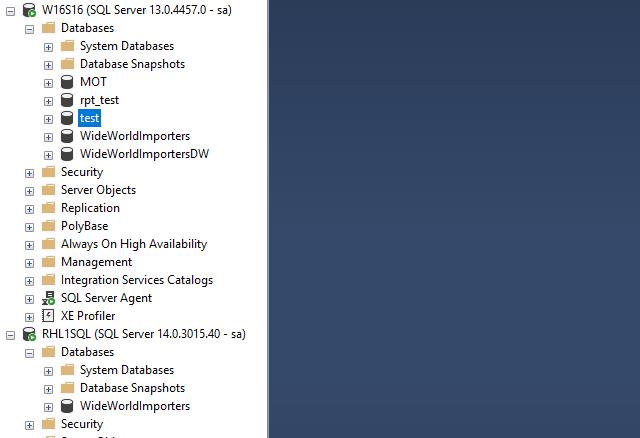 Then I copied that full backup file to the shared folder on my Linux box. 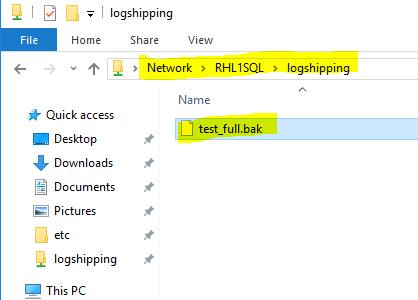 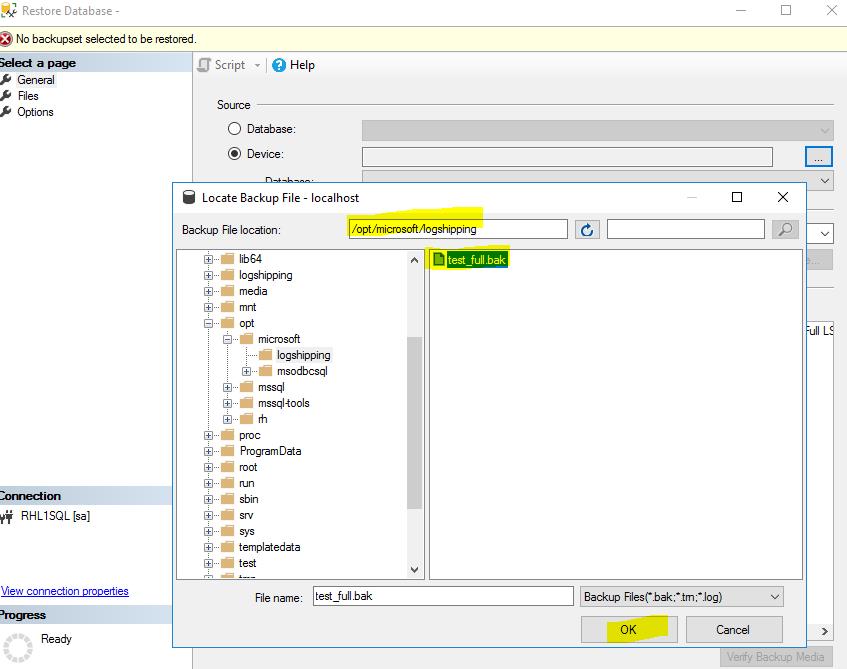 Because it is impossible to have the same file on a Linux and on a Windows box you must use move option in the restore command. How to use this option is shown on the screenshot below.

In order to be able to apply additional backups on the target server (MS SQL Server 2017 on Linux) the database must be restored with ‘NORECOVERY’ option. The MS SQL Server Management Studio has this option, which is called ‘Recovery state’. Optionally you can execute the ‘restore database’ command from a query window or as a command in sqlcmd. 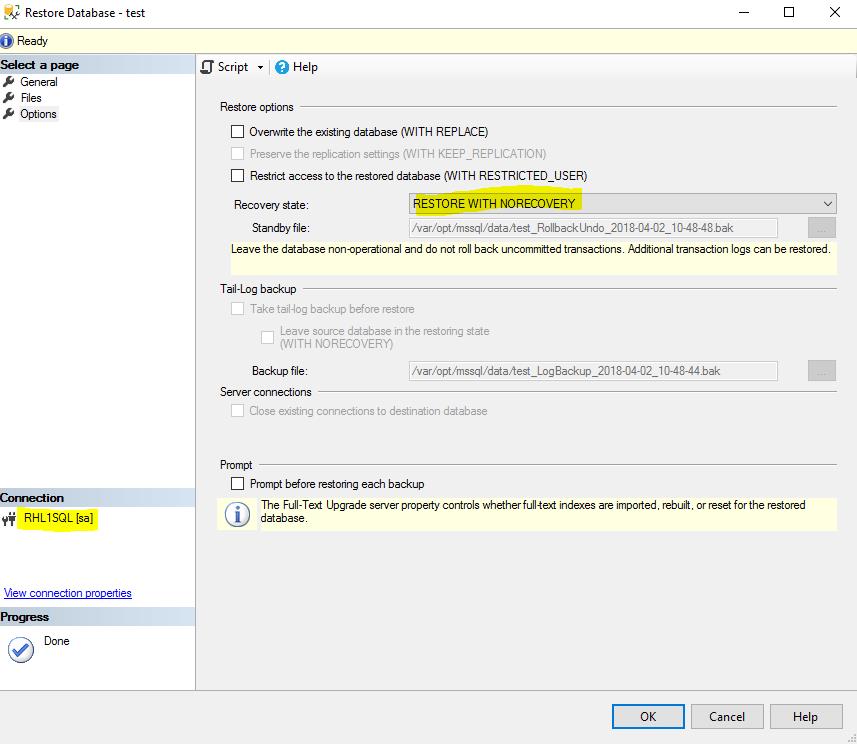 After the restore has been complete the new database will stay in the restoring state. That is also means that all the prerequisites for setting up of logshipping have been met and we can configure a logshipping session. 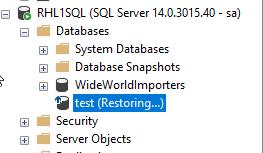 I used GUI of MS SQL Server Management Studio in order to set up logshipping session for the test database. 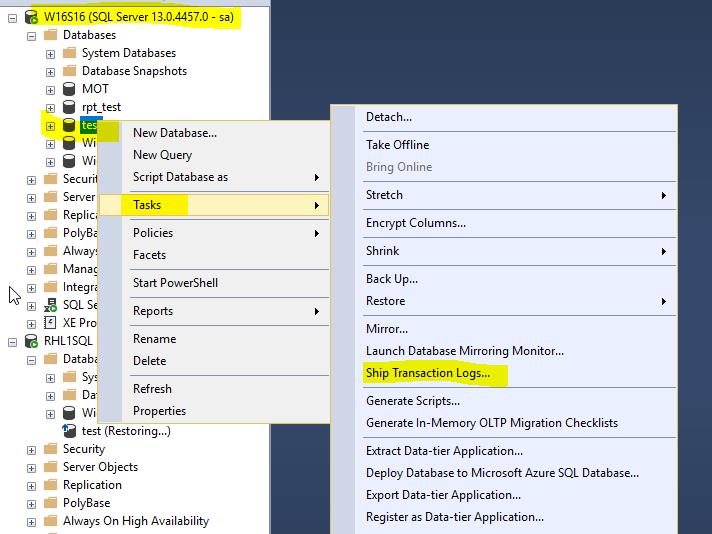 I used the default option which is backups and restores every 15 minutes. That can be changed latter on. Click Backup Settings. 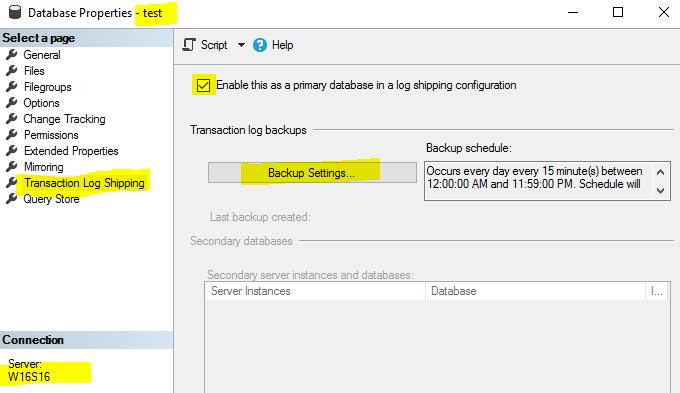 You need to provide the backup folder to t-log backups and the windows share name for that folder. 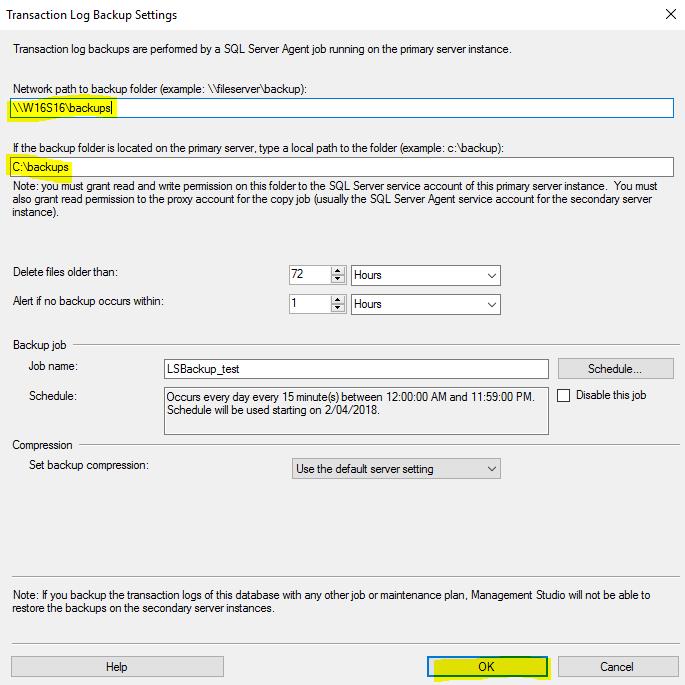 The SQL Server 2016 on Windows is my primary instance. 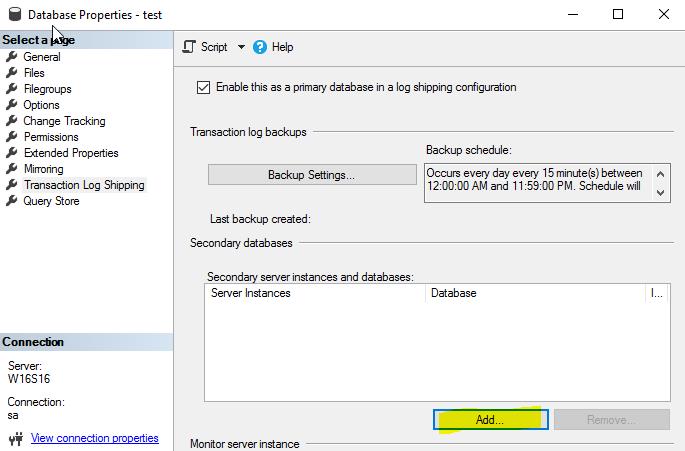 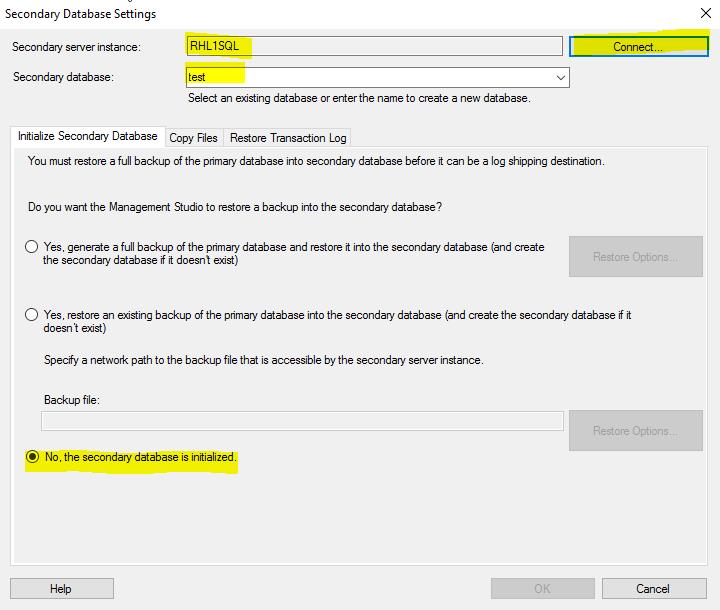 Also I need to provide a network folder for copying the backup files on the Linux box. 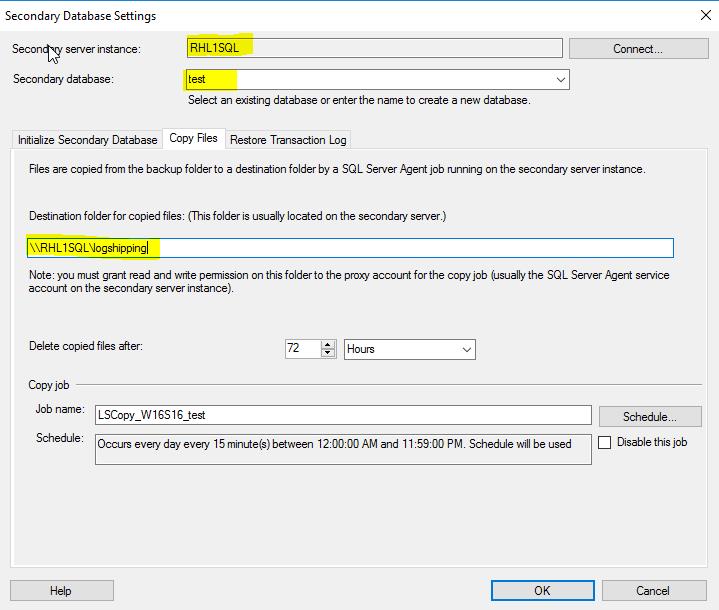 Again I have an option to choose the scheduler for restores but that can be easily changed later on. That is why I go for a default scheduler. 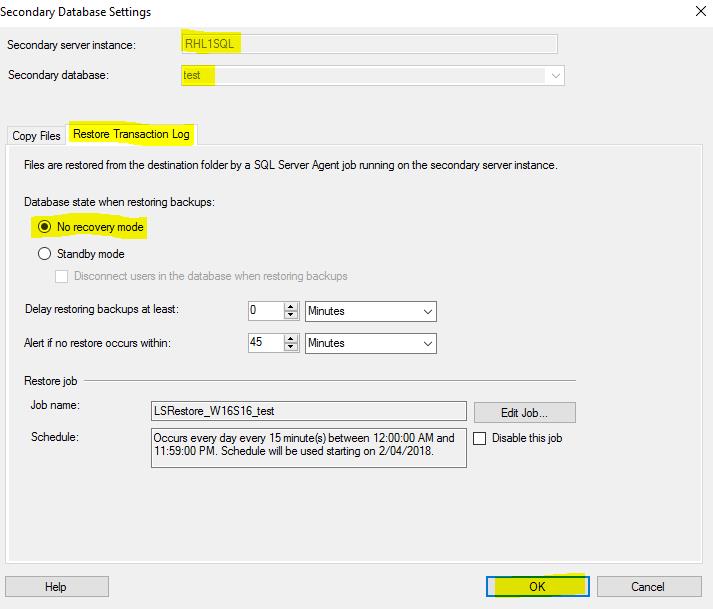 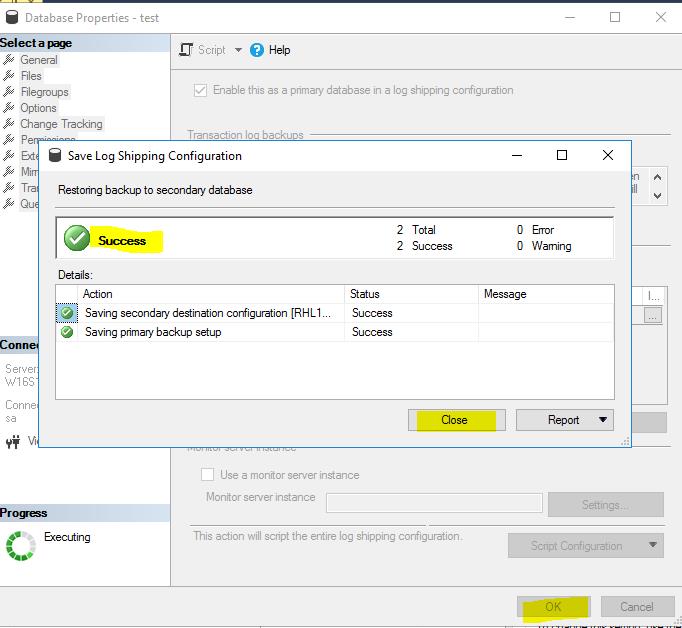 When the logshipping session was created I noticed that SQL Server can take the transaction log backups, but was not able to copy and restore them. The problem is that SQL Server on Linux does not support Windows share names (something like ‘\\myserver\myshare’). So we have to mount the windows share from the primary server as a network filesystem on the Linux box.

There are many ways how to mount a samba share on a Linux server but I used the ‘mount’ command. If you want to instruct your Linux box to mount the network disk after the reboot you should edit the ‘/etc/fstab’ file. I didn’t use the former option only because I need the logshipping session only for the database migration process so that network disk is temporary.

After that I still was not able to see the transact-log backups in the network folder on the Linux box. This meant there was a problem that the new log backups were not being applied to the secondary instance. The problem was that the logshipping wizard in the SQL Server Management Studio does not support the Linux paths. In order to remediate this problem I asked the wizard to generate the script instead of implementing the changes. 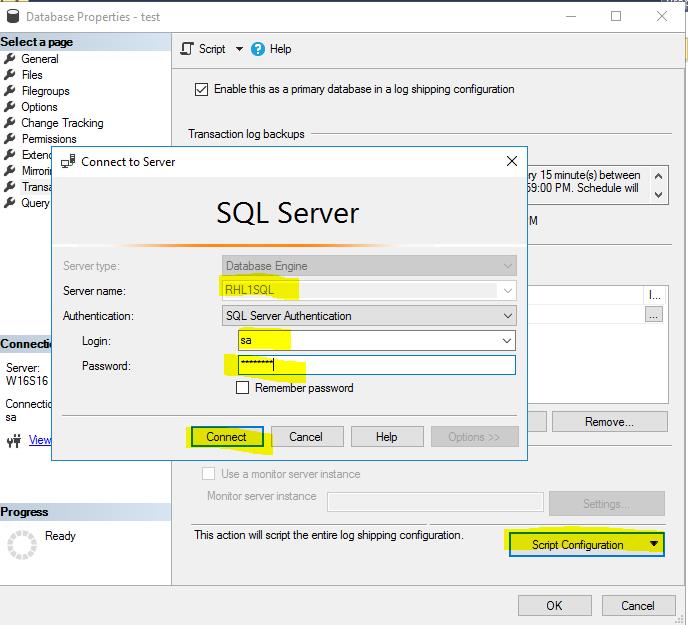 In the script the paths for the primary server were correct.

After fixing these issues the log backups started to restore as expected. 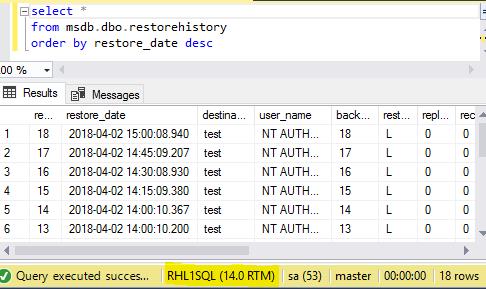 As it was described above, during a migration I usually switch the primary database into read-only mode. I did this in the database options, as shown below. 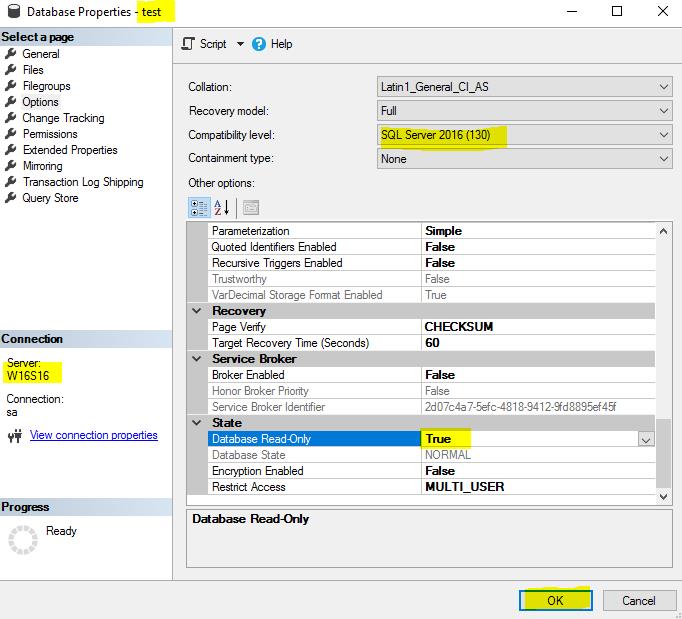 Once this was done, I executed the log shipping backup job on the primary server. 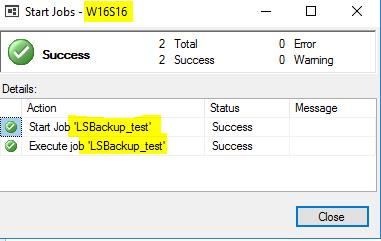 I executed the log shipping copy job on the secondary server. That job copied the last log backup from the Windows server to the Linux server. 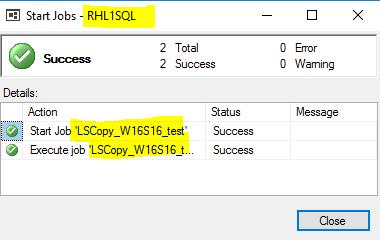 I executed the restore job on the secondary server in order to apply the last log backup from the primary server. 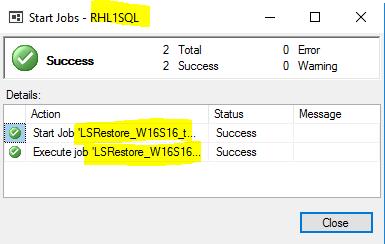 My secondary database was in the restoring state and I had to run recovery in order to make it available for the users. I used T-SQL command below. After that my database switched to the read-only state, the same as it was on the primary server. 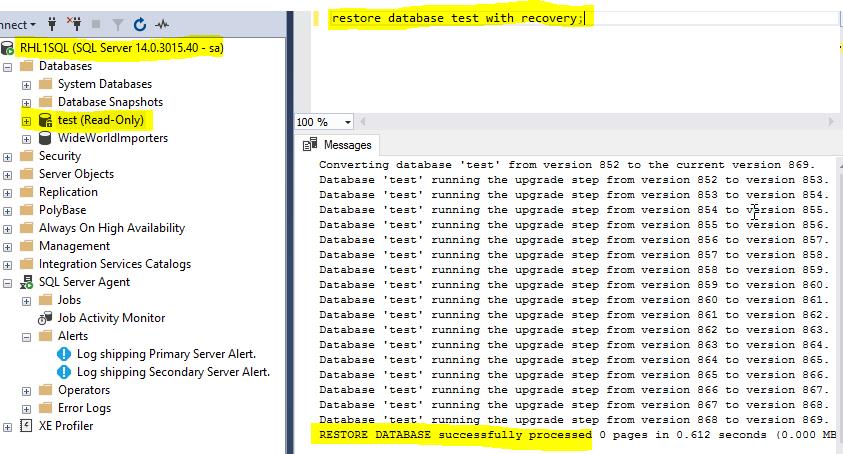 Finally I switched the database in the read-write mode and changed the compatibility level from 130 to 140. At this point, the applications could be redirected to the migrated database. 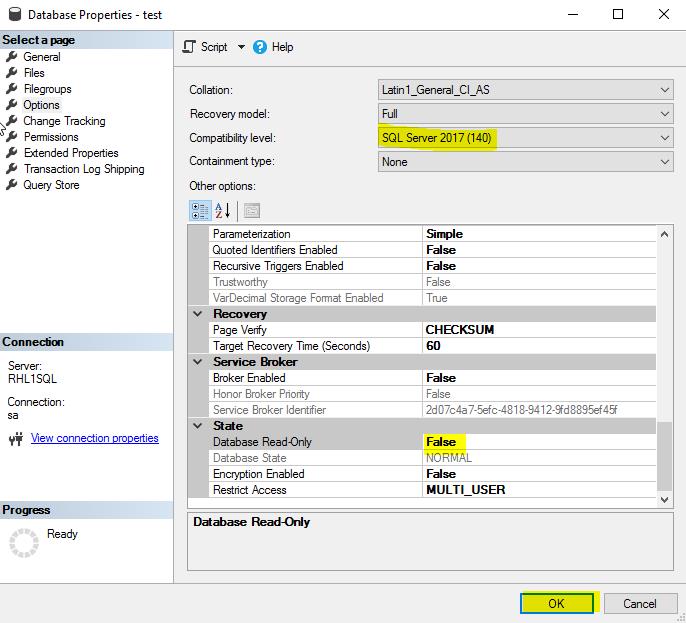 With this process, I successfully completed my first database migration from SQL Server 2016 on Windows to SQL Server 2017 on Linux. The database was unavailable only for a very short period of time.

After this was done, I cleaned up the system by removing the log shipping jobs, unmounting the samba drives, stopping the samba server, and decommissioning the old SQL Server 2016 on Windows instance.

We can employ log shipping in order to perform a migration of our databases from Windows to Linux. But there are some differences from how you do it between two Windows servers and how you do it between Windows and Linux servers. The process is relatively simple and even a person with limited Linux background, like me, can do this.

The most inconvenient thing I found is that SQL Server Management Studio (at least version 17.4) does not support Linux paths in the wizard mode. I hope that it will be fixed in the feature versions of the product.

In this tip, Edwin Sarmiento looks at how to create the Always On Availability Group with a listener name when using SQL Server on Linux.

The T-SQL language expanded in SQL Server 2017 with the TRIM() function.

Microsoft has released a version of SQL Server 2017 for Linux.