The buzz around SQL Server on Linux is certainly not new. For more than a year we have been expecting SQL Server to be let loose on previously dreaded Open Source Linux environment. I personally have been waiting to try my hands on doing the install myself and, I recently got round to it. I chose to use Amazon Web Services (AWS) to do my little experiment since I am familiar with AWS services and I think it is one quick way to get a server up and running for experimental purposes. The following steps briefly show how I created my Elastic Cloud Compute (EC2) instance.

Login to your AWS console, navigate to EC2 Service offering and start the EC2 Launch wizard using the button shown in the graphic. I should state here that if you are interested in Amazon Web Services you can consult the documentation available at https://aws.amazon.com/. AWS is an excellent cloud services provider, top of the ranks according to Gartner.

Choose an instance type with a configuration strong enough to support SQL Server. I chose the t2.medium instance type since the minimum required memory for running SQL Server on Linux is 3.25GB, which a free tier t2.micro (the type of choice for experiments) will not be suitable for. It is important to know that when choosing an instance type that is NOT free tier, AWS will charge the customer.

Configure additional instance details. For the purpose of this demonstration I have used insecure options because I want to avoid the any inconveniences introduced by proper security. In a live scenario you may want to properly define the IAM role desired for the instance and you may want to use a Custom VPC. You can also consult AWS Security Best Practices White Paper for recommendations on architecting secure cloud infrastructure.

In this step I add two additional Elastic Block Storage (EBS) volumes because I want to create my databases on separate volumes. It is worth noting that EBS is the preferred storage type for database files on AWS.

Adding tags on AWS assets is optional but helps in identifying the assets for a number of reasons including billing.

Security groups are a way of controlling access to your environment at Layer 3 of the OSI model in AWS. In this demonstration I have a security group called MSSQL in which I have defined access to my Linux Server on ports 22 and 1433 from everywhere. Again this is another evil security practice. In a live environment you may want to specify the IP addresses or subnets that should have access to the server on ports 22 (for SSH access) and 1433 (for database instance access).

Once all options are specified, we are ready to launch our instance. Take note of the warnings I earlier highlighted regarding security. It is worth keeping in mind particularly if going live with your SQL Server instance.

The last prompt you get when creating an EC2 instance is for the Key Pair. For Linux servers, AWS allows access to the servers via SSH using a Key Pair rather than merely a username and password. I have an existing key pair which I selected for the purpose of this demo. 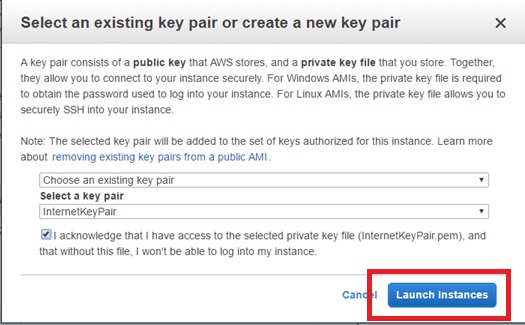 Our instance is live and we can see its public IP Address. We shall use this public IP address to connect to the instance using Putty and SQL Server management Studio for SSH and Database sessions respectively.

Once our EC2 instance is ready we proceed by taking the following actions:

We connect to our AWS EC2 instance using Putty, a terminal Client tool capable of doing SSH connections to a variety of Unix-like Operating Systems. In order to connect successfully to the server, we must specify the Private Key File (a .pkk file) stored on the client computer which was initially created or selected when building the EC2. The default user for connecting to AWS EC2 Linux machines is ec2-user and we can define and save a session as shown in the graphic with the details we have mentioned. 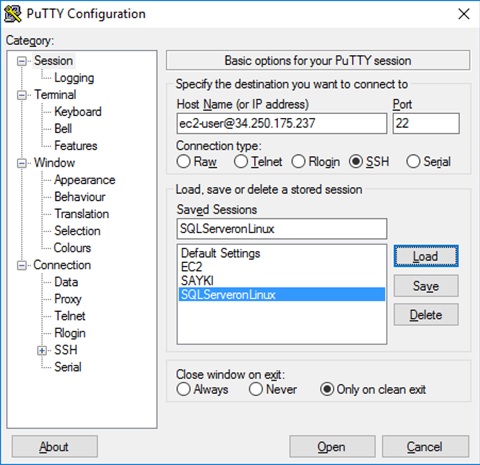 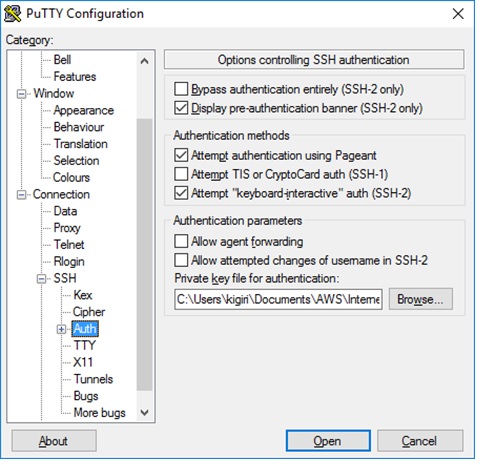 To prepare for installation of SQL Server vNext, we take the following actions:

Login to the Linux Server and update the OS using as root:

Download the MS SQL Server RedHat Repository configuration file and run the installation using yum. Once done you can proceed with setup command /opt/mssql/bin/sqlserver-setup. The setup process is very simple: you are prompted to accept the license terms, and then configure the sa password as well as startup options. 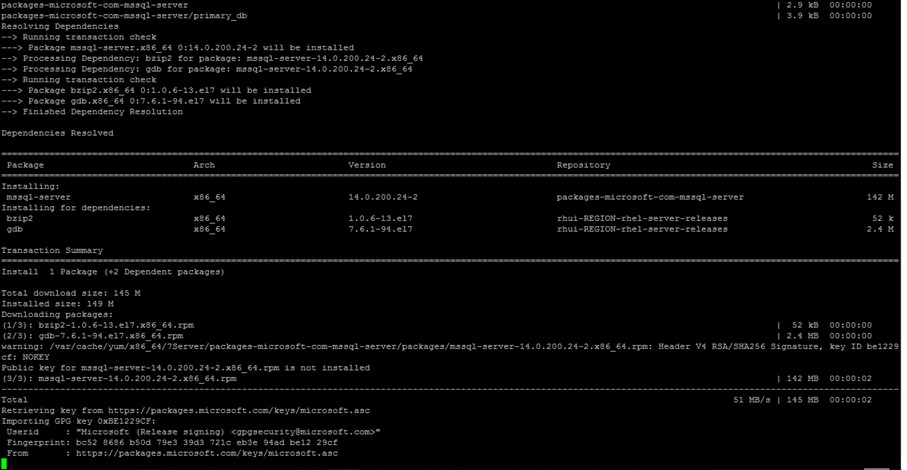 Fig 16. Setting Up the Instance

Once installed, you can confirm SQL Server is installed and running on Linux using ps and systemctl commands: ps -ef | grep mssql and systemctl status mssql-server. Observe the owner of the SQL Server binaries (mssql). This is basically equivalent to the service account on Windows.

Observe that these binaries have been installed by default in /opt. The default data and log file location is /var/opt. 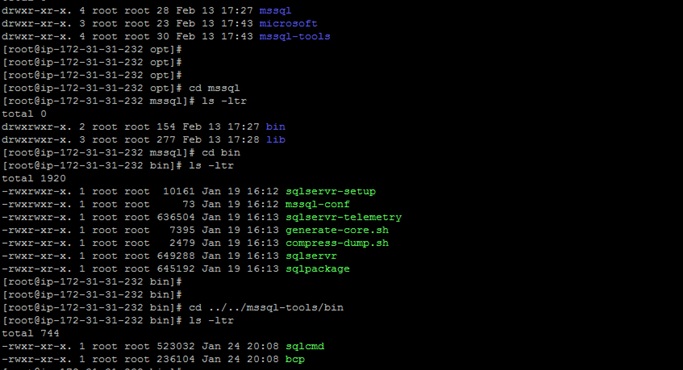 We can login to the SQL instance the very same way we do on Windows using the client tools sqlcmd and SQL Server Management Studio. The regular command sqlcmd -S localhost -U sa -P <password> works just fine. I was also able to access the instance from my personal laptop because I had opened port 1433 to the world (grievous offence).

By the way, you will observe that the SQL Server Agent Service is disabled. Incidentally it is among the "yet-to-be-supported" services documented for SQL Server on Linux.

We can view properties of the instance and databases just like SQL Server on Windows: 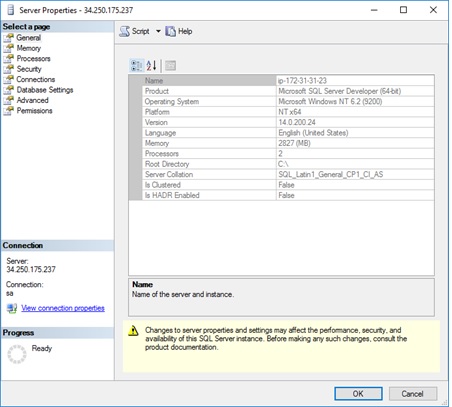 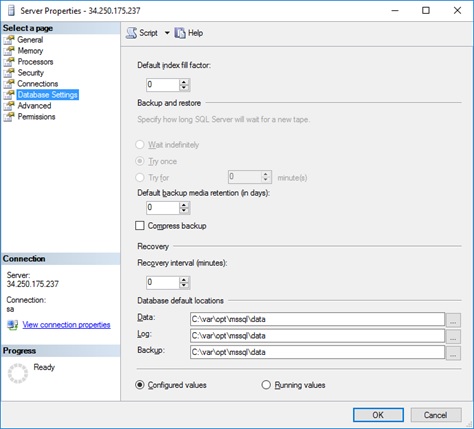 We can go further to create a database using non-default paths. Before we do that we have to mount our EBS volumes as file systems using the following steps: 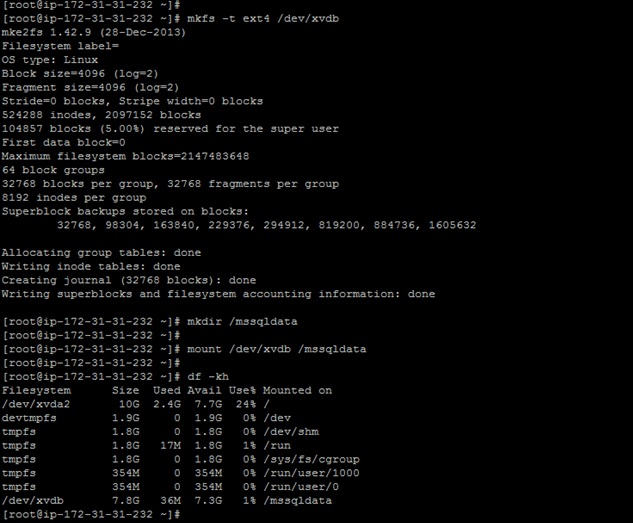 Fig 27. Output of lsblk after Mount

Once the above is done it will be possible to create a database whose datafiles are sitting on these volumes after ensure the user mssql owns the subdirectories.

In summary, installing SQL Server vNext on Linux is extremely simple. The installation itself is as simple as the installation process - all we have is a database engine. be that as it may, the functionalities we expect in the regular database engine we are familiar with are fully available as far as I can currently see. However I did notice I was not able to change the database defauIt locations. This may have something to do with the path naming conventions but I am yet to delve deeper. Overall I do think moving to the Linux platform is a huge leap for Microsoft anyway and I look forward to deploying SQL Server on our production Linux instances. It will do amazing things to our cost-cutting initiatives.

As a DBA you do not need to know how to setup an Active Directory domain or a DNS server, but you still need to know how Kerberos, Service Principle Names, and hostnames are used to perform integrated authentication to a SQL Server. This article by new columnist Chad Miller shows you some of the more integral parts of troubleshooting running Windows Authentication security in a SQL Server environmnet.

Initial Installation of the Production Database

Your software has passed all testing phase(s) and it is time to install your database into production. Andy Jones will outline below how he accomplished this task. This article is concerned with an evolving system and how to migrate it to production.

In this next article of the SQL Server in the Enterprise Series, we'll explore how to cluster Windows 2000 and SQL Server 2000 in a step-by-step manner. After this article, you should be able to cluster a SQL Server 2000 machine for failover availability in an Active/Active cluster.

As I work with a particular topic or problem, I often research on the Internet different opinions, white papers, etc. Here is a list of resources that deal with the licensing aspects of using SQL Server.

In this article, Brian Kelley focuses on learning the various services in SQL Server. He also covers the security needed to make them work.