administrators and Visual Basic developers with regards to interfacing with SQL

Server 2000.  One of the things I've discovered on the NT side of the house

OS.  This was a topic I discovered with dismay when interviewing DBA

candidates for my current company.  Only two of a whole slew of potential

employees understood SQL Server and the services it uses, which made me

pause.  Because of the way SQL Server is installed and administered, I

wasn't terribly surprised by the DBA candidates.  I did, however, impress

upon them it was essential to understand how SQL Server ran, because that could

environment.  As for the developers, I'll forgive them, because it isn't

really their job to know.  The NT administrators on the other hand... but

2000 runs.  By understanding how SQL Server operates and the permissions

thereof, we can quickly narrow down on issues that will occur in a production

environment.  Also, we can help our NT administrators understand what they

shouldn't stop and/or disable when SQL Server needs to be kept running.

backups by mistake?  Not a pretty sight!

We'll look at several things in this article:

Looking at Server Manager (NT 4), we might see the following: 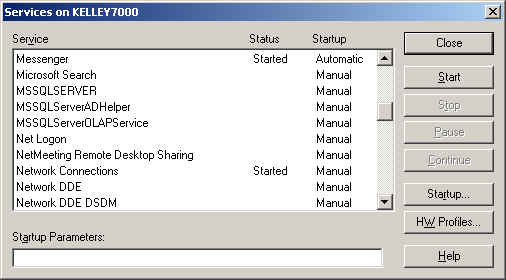 or looking at Services under Windows 2000: 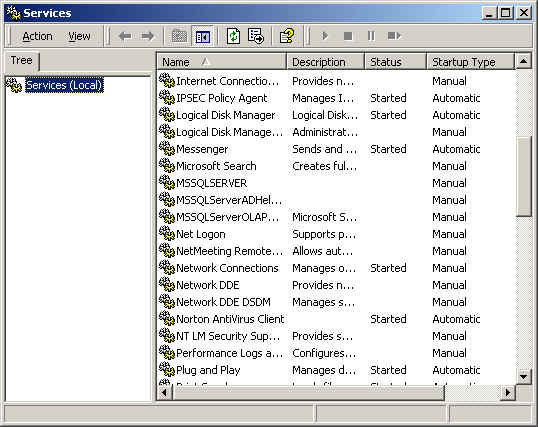 is not seen unless SQL Server 2000 Analysis Services is installed.  Now

that we're familiar with the names of the services, let's look at each in turn.

Server, per se.  Under Windows 2000, it is administered under Component

several servers.  Under SQL Server 2000, we would begin a distributed

It is important to note that distributed transaction resources are not

confined to SQL Server or even to RDBMS services such as Oracle or DB2.

Message queues are one non-RDBMS resource that can be accessed by MS DTC.

clustered mode.  The Cluster Wizard (comclust.exe) can be used to configure

Microsoft Search is the service which supports Full Text Indexing.  If

2000 Standard and Enterprise installations), the Microsoft Search service is

likely not present in the Services list.  The advantage we get with Full

if we're having to deal with wildcards.  Also, full text searches allow us

query using SQL Server's native engine.  However, the draw back is that

Finally, Microsoft Search is not available for SQL Server installations on

the Microsoft Windows 9x platforms.  It has to run as an NT service and

Search.  However, Windows 9x clients can use Full Text searches if an

NT-based SQL Server has it installed.

This is the base service for a default instance of SQL Server.  We'll

talk about named instances in a bit, but with respect to default instances, the

SQLServerAgent service is dependent upon this service running.  Also, the

MAPI profile for use with SQLMail. More on this later as well.

Generally, the MSSQLServer runs as a domain user account in networked

installations.  Though it it is typical for this domain user account to be

given local Administrator rights on the server where the service is running,

this isn't enough to register SQL Server with Active Directory.  As a

result, the MSSQLServerADHelper service has been added to the mix for SQL Server

2000. Both the MSSQLServer and MSSQLServerOLAPService will use it in order to

In order to register objects with Active Directory, the account doing the

Windows account for a particular server.  Since we typically run

MSSQLServer as a domain user (which does not have Domain Admin rights), the

MSSQLServer service would be unable to register itself with Active

Directory.  The work around by Microsoft is MSSQLServerADHelper.

the MSSQLServerADHelper service will be started and utilized.  After

registration is done, it will be stopped.  So it is normal to see this

Services at any given time. On a side note, regardless of how many instances of

SQL Server that may be running on a particular server, only one

MSSQLServerADHelper service is required because all instances will use it.

Unless Analysis Services is installed on a particular server, this service

will not be present.  It is installed separately of any normal MS SQL

installations.  MSSQLServer is not required for Analysis Services, as it by

default uses a Microsoft Access (.mdb) database for its Repository, though the

Repository can be migrated to SQL Server.  With respect to permissions for

the service, it is important that the MSSQLServerOLAPService has sufficient

objects from.  It is the service's user account, not that of an Analysis

Services administrator, that is used to access the data source.

As can be deduced by the name, this is the service for the SQL Server

Agent.  If one selects all of the default choices on a SQL Server 2000

installation, the SQL Server Agent will be setup with the exact same user

account as the MSSQLServer service.  However this is not a requirement,

though it is usual.  As SQL Mail looks for a MAPI profile under the user

account the MSSQLServer service is running under, SQLAgent Mail looks for a MAPI

profile under the user account the SQLSERVERAGENT runs under.  In addition,

the user account specified for SQLSERVERAGENT.  This is a significant point

manually executed and fails when run through a job. If this is the case, the

can be installed on a system.  This also allows one to have SQL Server 7.0

running as the "default" instance with a SQL Server 2000 engine

running as a named instance.  Or multiple SQL Server 2000 engines can be

installed, which isn't all that unusual if one is looking to make the most of a

database cluster.  An Active/Passive means one server of a two server

cluster is essentially remaining unused.  Install a named instance and one

physical server, thereby maximizing the use of hardware, and providing the

With named instances, additional services for both SQL Server and SQL Server

Agent are required per instance.  How Microsoft handles this is to combine

MSSQL$ and SQLAgent$ with the name of the instance.  So if I were to have

both a default instance and a named instance called Server2, I'd see services

with the following names:

The other services related to a SQL Server engine install, MS DTC, Microsoft

Search, and the AD Helper service, stay at only one service apiece.  The

I've already spoken briefly when considering each service in turn about

permissions and it's not my intent to go into a lot of detail here.  Here

Here are some specifics:

SQLSERVERAGENT accounts, so I won't try to reproduce all the information

here.  Look in BOL for the absolute minimum permissions for these services

Everyone does demos. Selling software relies upon people viewing your software in action and being confident it will work. Managing a demo server can be a challenge and this series will look at different problems and options you have.

A monster book at 980 pages, it's written in 'how-to' format and has a ton of good material. Andy gave it the once over for us and reports back - see what he thinks!

As a DBA you do not need to know how to setup an Active Directory domain or a DNS server, but you still need to know how Kerberos, Service Principle Names, and hostnames are used to perform integrated authentication to a SQL Server. This article by new columnist Chad Miller shows you some of the more integral parts of troubleshooting running Windows Authentication security in a SQL Server environmnet.

In this next article of the SQL Server in the Enterprise Series, we'll explore how to cluster Windows 2000 and SQL Server 2000 in a step-by-step manner. After this article, you should be able to cluster a SQL Server 2000 machine for failover availability in an Active/Active cluster.

Andy sits down with an entry level book to see if he should use it at work as a teaching aid. Did he like it? Should you buy it? Read the review now!