As part of ETL (SSIS/DataStage) processing, data files are loaded into tables. There are times when data files received have issues, causing the ETL process to abort. The ETL (SSIS/DataStage) process on failure would give some idea on cause for failure but would not pinpoint to the exact set of records that are causing a problem. In this article we go over some very useful Unix commands that would help use us debug and resolve issues more efficiently and in a timely manner.

ETL processes (SSIS/DataStage) are designed to ingest files that are in an expected file layout/schema. These files could be either pipe, comma delimited or fixed width. There are many instances when a production job fails because the data file either has more or less columns than expected. The ETL process fails when schema issues are encountered with data files. The ETL process normally fails the moment it encounters first record that has this issue and does not list all records with issues in the file. If the developer just looks at that record and fixes/removes it and restarts the process, the ETL process would fail again at the very next record that does not comply with expected layout. In order to efficiently resolve all issues with the file knowledge of Unix commands would be very helpful for developers.

In this example we are expecting the Invoice.txt data file with 10 fields/columns.

awk command to check number of fields in a file

-F represent field delimiter. You would put the delimiter for your file.

Output of the awk command shows that we have records in file that have either 10 or 11 fields. As the ETL is only expecting records with 10 fields the records with 11 fields would cause ETL process to abort.

awk command to see records that have incorrect number of fields.

There are times when the ETL processing has failed due to a few records havings issue, but in order to meet SLA, it is imperative that the records with correct layout are loaded. The bad records could be requested again or fixed manually and loaded at a later time. In some instances, if it is a known issue, the production support personnel would fix the record and load it once they get appropriate permissions from management to manipulate data to get cycle going.

awk commands to separate bad and records and good records.

Many times ETL systems receive data files that are fixed width, and when the fixed width file records are not of correct length then the ETL process aborts. It can be challenging to find the records that do not have the expected file layout. The below awk command would print the length of each record and we can verify that the file records are correct.

Say in this case the expected record length is supposed to be 32.

We are seeing records whose length is less than 32. In that case we would like to create a file with correct length records and the separate bad records. The bad records can be sent to the source system for correction, and we can restart our failed ETL load process. There are 3 steps involved in the process.

Many times, ETL processes uses files that are generated by a user manually and saved in a versioning tool, like Subversion. These files are basically business control files that are used to control which data is loaded and which data is not loaded into reporting tables. There are many times the ETL processes do not work as expected because of carriage returns (Control+M) that are added to end of each line, as the file was created on a Windows system and then being processed on a Unix system.

The Control M characters are not visible by just using “cat” command. Here we have a file that is generated on a Windows machine:

The cat command with following options would show the special characters.:

On a Unix machine, the vi editor would show some of the special characters. On a Linux machine the vi editor would convert the file from DOS to Unix format and would not show return carriage on screen. In Linux at bottom of screen it would display saying converted from DOS format.

If you notice the last 2 characters Carriage and new line character are both displayed. Similarly, you could find other special characters using octal dump.

Use the following awk command to remove carriage returns and write corrected records to different file.

Use the following sed command to remove carriage returns.

Use the following Translate command to remove carriage returns from the file.

Using “dos2unix” command, the carriage returns can be removed.

In this case the same file will be modified. There is no need to place the output of the command into a different file.

There are many times when a command or script needs to be kicked off, and it would run for few hours. In cases like this if the command is directly triggered from the command line, then the job will be running for a long time and you can’t use the terminal for any other tasks. Also, if you have to close your computer, then the process would abort. To avoid this, we use “nohup” command and run the process in background by using “&” at the end of the command.

“nohup” stands for “No Hang Up”. Using this command would not result in your process terminate even if you close or exit your terminal. nohup is normally used in conjunction with “&”. “&” would make the process run in the background and would return the command prompt to the user. The standard output for commands invoked using “nohup” are routed to “nohup.out” file and would be located in same directory from where “nohup” command was invoked.

If you see here the “cat” command was invoked with nohup and “&” option. The content of the file was not displayed on standard output (screen) but was directed to nohup.out file.

There are many times that one user has access to execute specific script or access a specific application or directory location whereas the other developer does not. One of the easy ways to identify access mismatch would be to compare the groups you belong to and compare with other developers’ groups. By running following command, you can see all groups that a user id belongs to.

The Groups command would give all the groups the userid is part of.

The uid represent the real and effective user id (UID). GID is the group id and then all the groups are listed.

Check all the groups on the system

You can check all the groups on the server by using command:

Normally large files are gzipped once data is loaded using ETL process. But there are times when the files in archive are needed for debugging purposes. In these cases, there could be multiple gzip files that need to be searched to look for a particular record. Unzipping lot of files will take storage and would also take lot of time to gunzip lot of large gzip files. The easiest way is to look at the data without unzipping them and this could be done using following command.

You could also calculate the file count without unzipping the file using following command:

The AIX Unix command to list all mount point storage:

The Linux command to list all mount point storage:

To check space left for a specific mount point, we use these commands. The AIX Unix command to list all mount points:

Find duplicate records in a file

Finding unique records in the file

If you received a file that has duplicates and like to see only the unique records in the file you could use the following command.

If you like to create a file with only unique records from a file that has duplicates. You could use the following commands.

Removing a file older than a certain period

In a regular ETL process, after loading the files into tables, the source files are archived for 60 to 90 days and then they are purged to make space for new files and avoid storage space issues. The following command could be used to remove files that are older than 60 days.

Check to see if the ETL process is still running on the server.

The command to see any specific process running on a server.

To see processes being executed by a specific user use the following command.

Check all users on the system

There are times when you like to know who are all the users logged into system/server. You could use the following command. 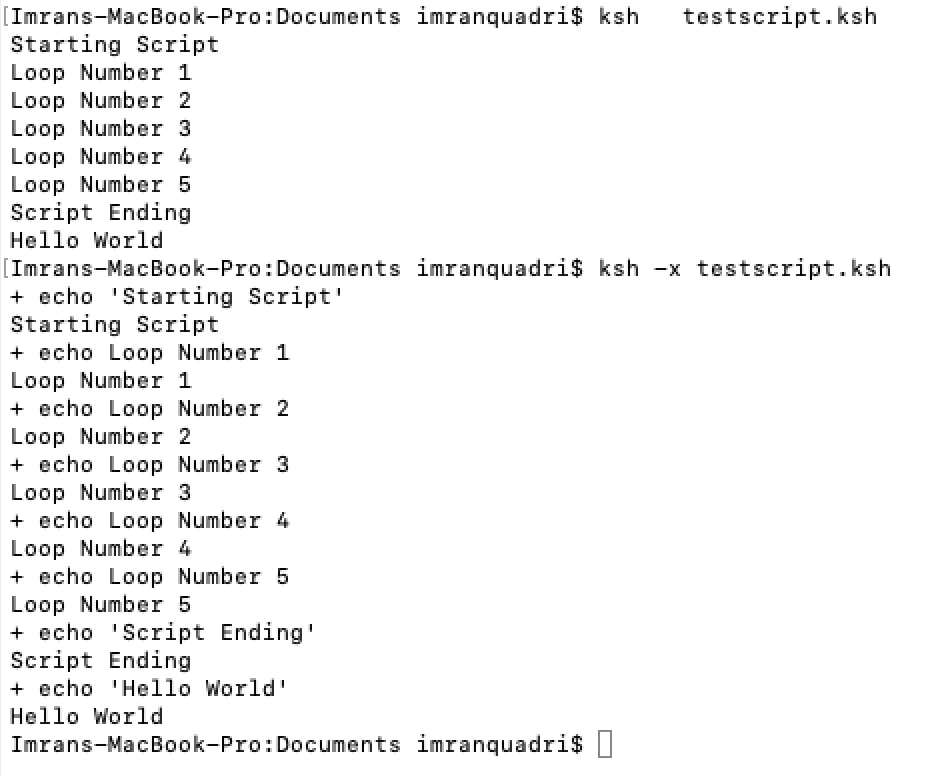 You can also run the shell script in debug mode by using the following set option.

Set Shell script to abort on any command failure.

Set the following option in script for it to abort if any of the commands fail instead of continuing.

Without set -e option in script. The script continues with next command even when “mv” command failed.

With set -e option in script. The script aborts when any of the command fails in this case, move command failed.

By using above helpful Unix commands explained in above article, it would help development/production support resources better use a Unix/Linux operating system to debug and resolve any issues in a more efficient and timely manner.

The purpose of this document is to help design Unix shell scripts (or any programming scripts) with restart capability from point of failure and also to avoid a common mistake done by developers/admins while filtering records.