Five Things I Learned at the PASS Summit

I first heard about the Professional Association for SQL Server (PASS) in the spring or summer of 1999. I had been a DBA for awhile, but struggled to learn about SQL Server. I had relied upon constant reading of the documentation, experimentation, and a number of calls to Microsoft Product Support over the years. However getting the real world experience of others was hard in the mid-90s, and I was excited to participate in this new group. I made a pitch to my boss, citing things I'd learned at a previous company when I attended a product conference and got the funding to head to Chicago in the fall of 1999.

Over the years I've attended almost every Summit. I missed a couple, and regret that since I've learned a lot and found the time at the conference to be invaluable in my career in many ways. I probably could write more, but here are five significant things that I learned from my trips to PASS.

When I attended that first Summit in Chicago, I was workign for a financial services company that managed money for various clients, including quite a few university endowment funds. We had standardized our platform on SQL Server 6.5 and and had a complex database design (not mine) using views of views to limit the data that any particular client could access. Clients almost always worked with views that provided row level security, however at times we allowed clients to create a file that contained a large number of block trades and upload them to the server, inserting data through views.

We had numerous performance problems, and even corruption problems. Product support had helped us recover data before, but it was at the conference that a very expensive consultant happned to be near me, heard about the issue, and told me that we were risking more and more corruption because of a bug with views that existed in the product. He gave me his email, and when I followed up with him, some documentation that showed we needed to change our application code to avoid the views. I can't determine what potential headaches this saved us, but I never spent the night in my office again for a support call because of data corruption.

I have almost always been of the "build it" mindset when it comes to many solutions. However at one PASS Summit I learned that third party tools can really help. I worked with a company that had a large number of v6.5 servers, and at that time all of the tools were online. There also wasn't a personal or local edition of SQL Server for us to use when traveling and the server edition would make laptops of the 1999-2000 era run extremely slow.

I was walking through the exhibition area at the Chiacago Summit and stopped at the Embarcadero booth. One of their tools, RapidSQL, allowed you to edit SQL offline, allowing code reviews and other work to be done on airplanes, on the road, etc. That sounds like something you'd expect now, but in 1999, it was big news. I spent an hour talking to an engineer who had been dragged out to man the booth and learned some tips and tricks for a few of their products and ended up getting licenses for me DBA team and a few developers.

I don't know how much time we saved, but I do know that we had fewer mistakes during deployments, and I got more work done as I flew around the country for that job. My manager was pleased with the purchase, and it made me look for more tools to help me improve the amount of work I could get done in the future.

A few years back Andy Warren and I were wandering around the halls at the PASS Summit. We tended to walk into a session for 10-15 minutes to check out the speaker and attendence on a topic. Often we'd walk out fairly quickly and move on to something else. We stopped by a session on disk technology from a NetIQ guy. He was a good speaker, but he captivated us. He dove down deep into the issues of how latency occurs on disk because of rotational speed, and percentage of the disk being used. He talked about aligning cluster sizes and quite a bit of other details in layman's terms. It was amazing. We watched the entire presentation, and some of what he talked about sticks with me today.

Now a lot of his information was pre-SAN days, when almost every server was built with DASD (direct attached storage) and we had lots of R5 and R1 arrays. However we used some of it at one of my jobs to tune the database servers, and to debunk a SAN salesman that was trying to tell me that putting a very busy Exchange server on the same disks as my extremely busy log files would have no effect on performance. In the years since I've seen Linchi Shea and others talk about specific hardware performance and tuning measures and techniques. Things that I think are extremely valuable to becoming a better DBA and running better tuned systems.

I started a training business a few years back with Andy Warren and Brian Knight called SQL Share. We realized that so many people struggle to find practical, real world, intensive training that can help them in their job. You can get some from SQL Skills, and you might be lucky enough to catch Itzik Ben-Gan teach advanced T-SQL, but those are few and far between. If you can go, go. They are great teachers, and there are others out there as well, but it's hard to find classes and the MOC stuff doesn't cut it for most DBAs.

So what can you do?

A couple years ago I wandered into Brian Knight's pre-con on SSIS near the end of the day. I watched him do the last 30 minutes and was amazed at how much information he was packing into that day. A hundred people were furiously scribbling notes, and I'm sure they spent weeks going over those notes at times, and using some of that information in their jobs. I spoke to a few people I knew that had been there all day and they kept saying that one day was some of the most valuable training they had gotten in their entire career. That's a testiment to Brian's skills, but there are plenty of other pre-cons at the Summit every year. You could learn CRL from Adam Machanic, Indexing from Kimberly Tripp or SSIS from Brian. I'm not sure what will be offered this year, but there will be a variety of relatively low cost ($400 a day) training the day before and after the Summit.

For a little more than the cost of most Microsoft classes, you can get great training at the Summit. It's worth tacking on a day before or after and coming to one of these classes. 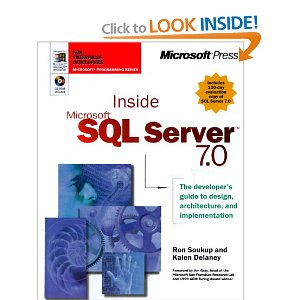 There are some smart people that attend the Summit every year and speak. They talk about some interesting and fascinating ways in which they use SQL Server to solve issues, and can be intimidating to the average DBA. I felt that way at the first Summit when I went to hear Kalen Delaney speak. I'd read her book, Inside SQL Server v7.0, and very much enjoyed her talk about some of the internals. Afterwards I managed to find the courage to walk up to her and ask a question about how something worked. I'm sure she doesn't remember, but she clearly, and kindly, explained how things worked back then, and what had changed in v7.5, and I realized something.

I realized that this stuff wasn't rocket science. That I could learn this stuff just like these experts. I continued to read and learn, and grow as a SQL Server professional. Meeting these authors, these speakers and realizing that they were human gave me confidence, and I've heard others say the same thing. It's not something you can learn from a book or web site, but it is something that you learn in person. And something that will help you do your job better.

Hopefully you see some value in attending the PASS Summit 2010 in Seattle this November. It's worth it for your job and career, and it's a good investment. Talk to your boss, use my reasons above, or use the PASS ROI calculator and make a case for your going. Offer to trade out some brown bag sessions with other DBAs and developers to teach them some things you've learned.

Come to the Summit!

And be sure that you use my code ("SSC2010") when your register. It will save $200 off the cost of the conference, which pays for a night in a hotel. And you'll get a free ticket to the Monday night SQLServerCentral party. We throw a great event after the opening reception where you can come meet other SQLServerCentral community members and have some fun before you buckle down and start learning.

Use this code to save your company a little money, and have a little fun yourself.

"But It Worked in Development!" - 3 Hard SQL Server Performance Problems

You’ve been performance tuning queries and indexes for a few years, but lately, you’ve been running into problems you can’t explain. Could it be RESOURCE_SEMAPHORE, THREADPOOL, or lock escalation? These problems only pop up under heavy load or concurrency, so they’re very hard to detect in a development environment.

SQLServerCentral is hosting an opening night party at the 2010 PASS Summit. Read more about this and learn how to get a ticket.

There are some good reasons to think about attending the 2010 PASS Community Summit.

Call for Nominations – PASS Board of Directors

PASS is looking for new directors for 2010.

A few of the reasons why you might want to attend the PASS Summit this November.