This article will discuss geo-replication for an Azure SQL database (PaaS) and the steps required for setup via the Azure portal and T-SQL for my database, which is located in West Europe.

There were many more advantages to using active geo-replication such as that you had the ability to create multiple secondary databases with a maximum of four that could be readable and you had the flexibility of choosing whatever data center you desired, but this was only applicable to premium tier databases.

So for this article I will show the steps required to setup active geo-replication. 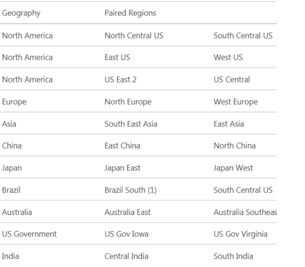 Microsoft’s aim is to provide (where possible) at least 300 miles of separation between data centres in a paired region. For example the distance between the North European data centre and the West European data centre. This means there is less likelihood of your database being affected by a natural disaster or a physical outage affecting both data centres at the same time.

On the flip side excessive distance can be troublesome too, especially when it comes to latency and bandwidth for when replicating data between the sites, this is something to be aware of especially if you decide to use active geo-replication’s capability of selecting a region of your choice.

To successfully setup active geo-replication you will need:

Within your Azure SQL database click on the Not Configured option under the geo-replication role. 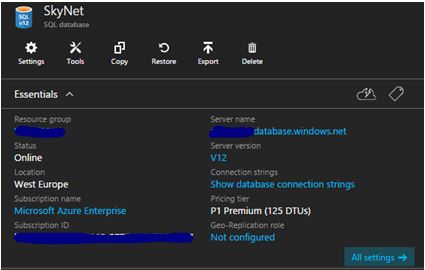 This will then take you to the main geo-replication dashboard. Here you will need to select the Data center that you would like to replicate to – for this article it will be replication to North Europe. 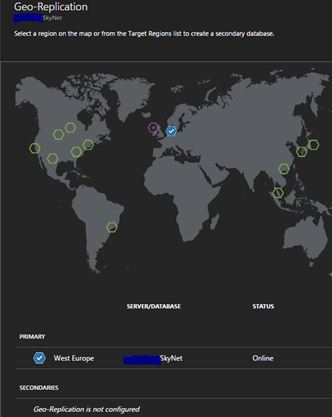 Once you have decided on the data center of your choice you will need to create the database on a server that is located in that region. 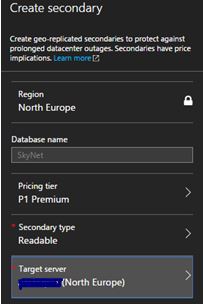 Once this section has been completed, initialisation takes place.

The next stage is that the secondary database will then be populated with the data copied from the primary database. This process is known as seeding.

When seeding completes then replication is complete. These secondary databases that you create will operate under Read Committed Snapshot Isolation (RCSI) mode.

The below image shows the geo-replication map when you have successfully created one readable secondary. 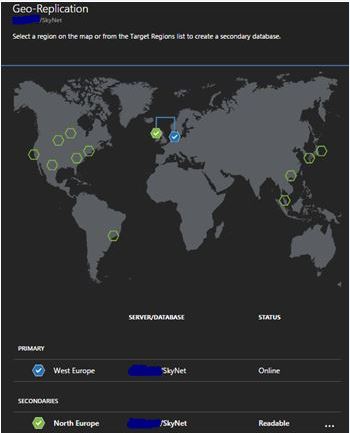 Geo-replication in Azure uses asynchronous replication, so when you click the failover button (as circled below) the following takes place.

Firstly, replication temporarily switches to synchronous mode. This will cause all outstanding transactions to be flushed to the secondary, then once this has completed the primary and secondary roles of the two databases in the geo-replication relationship switch positions. 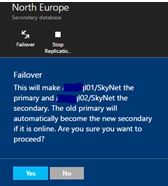 Books on line (BOL) does state that there will be a short period during which both databases are unavailable (approximately 0 to 25 seconds) while the roles are switched.

This removes the secondary database from the replication relationship and it becomes a standalone database that operates in read/write mode.

The next section will give you a high level look at using T-SQL to help setup active geo-replication – as opposed to using the portal.

If you want to use T-SQL to setup a secondary, then you can.  It is recommended that you use the latest version of SQL Server Management Studio (SSMS), this being the June 2016 release, found at the following link: https://msdn.microsoft.com/library/mt238290.aspx

Once installed and you have connected to your primary server you should then navigate to the master database as shown by the red circle (the USE command is NOT supported) and click the new query button as shown by the blue circle and issue the following the command. 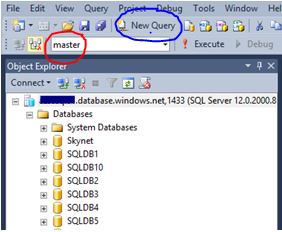 For the above T-SQL to work, it assumes that the secondary SQL Server has already been created. Also you should be aware that if the database already exists on the secondary server the command will fail.

On the secondary server you will now see the replicated database.

To confirm setup you would use the following T-SQL when connected to the master database:

There are three states that the replication partnership can be in, these are:

The below statement should be executed on the master database on the Azure SQL server on which the geo-replicated secondary database resides on.

All SSMS will give you is a Command(s) completed successfully message. You could then check the portal to confirm that the role switch had occurred or query sys.geo_replication_links to confirm the new role status.

If you try to run this code on the PRIMARY you will get the following message:

The operation cannot be performed since the database 'xxxx' is not a replication target.

To remove a replicated database you need to issue the following command – this should be executed on the master database on which the primary database server is located.

I prefer using T-SQL for monitoring, more specifically the following queries. The first query should be executed on the master database on the primary server where it will show the last replication time and capture replication lag in seconds.

If you terminate the replication relationship by removing the secondary database (as shown in the previous section) the row for the database in the sys.dm_geo_replication_link_status query disappears.

The next query (again you will need to issue it from the master database) will get all activity against your replicated database. There is some great information stored here, such as success and failure operation messages.

For example, from the below screen shot the last row operation has the text ‘Terminate continuous database copy’ this failure occurred due to a security privilege issue, I knew this because the errors get written to a column called error_desc.

Hopefully this article has given you a better understanding on how to setup and monitor active geo-replication for your Azure SQL database.

Active Geo-location is powerful magic for ensuring the high availability of a Azure SQL database, and for disaster-recovery. In choosing the best options, you need to accurately understand the value that the business places on the service you're running, long it will take for a secondary replica to be in synch with the primary replica, the importance of spreading the location of replicas widely, and the maximum tolerable unscheduled downtime. Just clicking all the options could prove to be expensive.

Migrating an on premise SQL Server Database to Azure

For this article I want to show you how to import a BACPAC file to create a new Azure SQL Database which is Microsoft’s Platform as a Service(PaaS) offering.