AlwaysOn is the new high availability feature in SQL Server 2012 and provides the ability to create multiple copies of a highly available database. In order for AlwaysOn to provide this level of availability it utilises the functionality within Windows Server Failover Clusters. It doesn't by any means replace Failover Cluster Instances of SQL Server, rather, it shares the use of the core technology presented by the Windows operating system. Just as you could with database mirroring, you have the option to combine an AlwaysOn availability group with a SQL Server Failover Cluster Instance, but it adds a great deal of complexity due to the strict AO implementation rules and the sharing of the Windows operating system failover cluster feature.

In this article we're going to look at 2 different scenarios, the first provides a basic AlwaysOn configuration, the second will show how an FCI can combine with AlwaysOn groups to provide an extremely resilient high availability option for your SQL Server system.

Before we start, and to help us on our way, let's look briefly and individually at each of these technologies to understand a little more about them.

What is a Windows Server Failover Cluster?

Windows Server Failover Clusters are a feature of the Windows server 2008 operating system. They provide the ability to combine multiple computer nodes (physical and\or virtual) to service a set of applications for high availability, in this case a SQL Server instance. The application is made highly available by presenting to clients a virtual access point comprising a unique IP address and a unique computer name or "virtual network name". These become resources in an application group and are passed between participating nodes like tokens.

The computer nodes use shared storage, which is presented to each node, usually from a SAN. The disks are added to clustered application\group and will failover between the nodes when the group is moved (either manually or through automatic failover). Throughout normal operation, only one node may obtain access to the storage disks at any one time (the node that owns the particular resources) to avoid volume corruption, this is also true for all of the remaining resources in the cluster group too. Disk access is controlled by the cluster service once the disks have been added as cluster resources.

The WSFC requires some form of mediation to control cluster resource ownership, and uses Quorum to maintain cluster stability. In Windows Server 2008 WSFC, this Quorum takes the form of a node voting system with the majority required to maintain Quorum. You may also use additional quorum resources in the form of a disk for localised clusters or a remote file share for multi site clusters.

A critical hardware failure of the active computer node would result in the loss of group service and would automatically start the group on an available partner node. At a high level, the client access point details are transferred along with any disk and service resources, etc to a failover partner node. A failover of the clustered instance causes disconnection of client connections, these may then reconnect once the service is available on a partner node.

What is a Failover Cluster Instance?

Note: Standard edition limits the FCI to 2 nodes but this does not dictate how many nodes have membership of the Windows cluster, it is merely at the installer level.

What is an AlwaysOn Availability Group?

An AlwaysOn Availability Group, is a group of one or more databases configured on a primary replica (or SQL Server instance) for high availability. This will typically include one or more further replicas which will service a copy of the highly available database(s). Partner databases may be either readable or standby and may also use either asynchronous or synchronous commit modes.

In AlwaysOn a replica refers to an instance of SQL Server that is participating in the AlwaysOn availability group.

AlwaysOn relies on the WSFC core functionality to achieve the high availability that AO offers, but does not require any of the following shared resources associated with an FCI.

There is one exception to this rule, when creating an AlwaysOn group listener this will create a set of resources shared by the AO group replicas, but note that this application\cluster group has no relation to a Failover Cluster Instance.

If you are using a listener for your AO group you are able to provide a central client access point for entry into the availability group, this provides a great deal of resilience when used in your application connection strings.

AlwaysOn is a feature configured at the individual service level by using SQL Server Configuration Manager. A computer node MUST first be a member of a valid WSFC before you may enable the AlwaysOn service feature. Availability replicas MUST be situated on separate physical nodes. Given this, in an example, INST1 must reside on Node1 and INST2 must reside on Node2. You cannot install INST1 and INST2 on to Node1 and configure an AO group.

For a basic AlwaysOn configuration, each node has local disk storage and non clustered instances of SQL Server installed. Ultimately, AO removes the storage single point of failure that is common place with shared disks. The nodes are completely stand alone apart from their membership of a valid Windows Server Failover Cluster.

Now that we have a little background we may start to look at how these technologies interact.

How Do Failover Cluster Instances Integrate With AlwaysOn Groups?

We first need to understand how this affects the WSFCs.

How does this look? 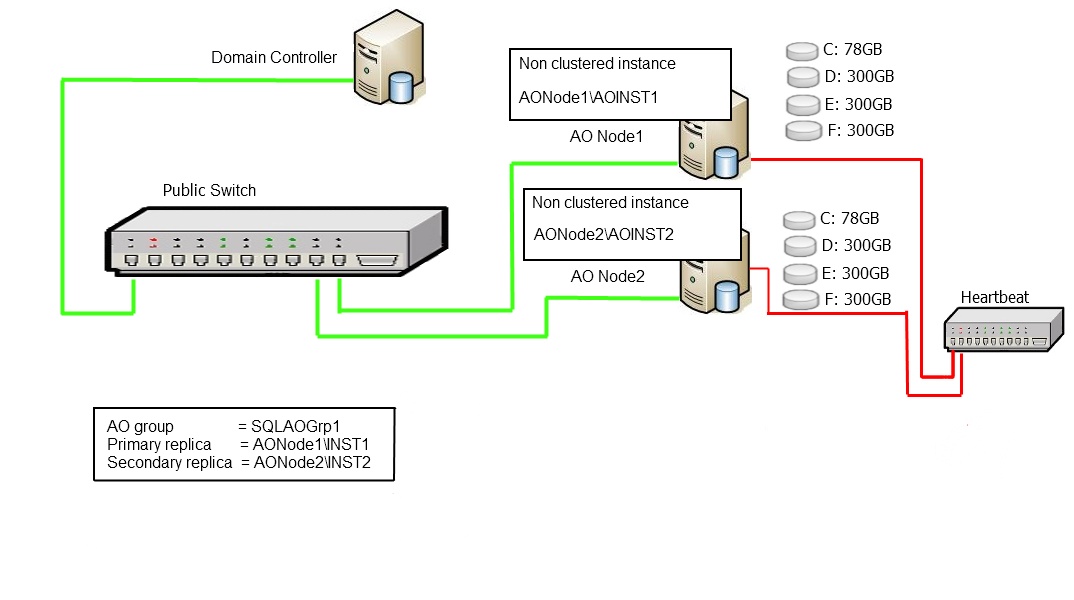 For this scenario, each cluster node listed above has the following local drive storage and a single non clustered instance of SQL Server installed.

The instances installed are;

The locally attached disks in use on each node are;

The key here is that both nodes have separate storage resources to each other but are both joined to the Windows cluster shown below;

The AlwaysOn group has a listener using the virtual network name and IP detailed above. This would represent a standard AlwaysOn configuration and does not use a SQL Server FCI or shared storage resources.

Remember, the goal in AlwaysOn is to remove the storage single point of failure by utilising separate storage resources between participating computer nodes.

Now let's take our second scenario to include a corporate FCI into our AlwaysOn configuration.

How does this look?

The diagram below shows a graphical representation of the AlwaysOn availability incorporating a SQL Server Failover Cluster Instance. 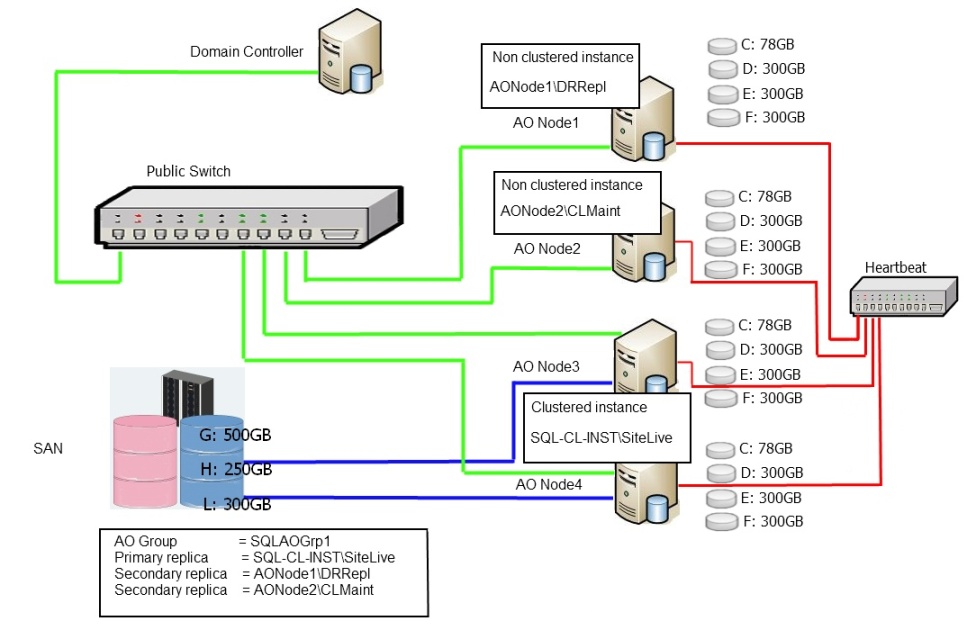 Each server has the following locally attached drive storage.

In addition to the above locally attached disks, AONode3 and SAONode4 have the following shared LUNs attached from a SAN.

We have our WSFC titled "SQLCluster01.UKTrading.co.uk", this is the cluster entry point for all 4 nodes and each server is joined to this cluster.

A Failover Cluster Instance of SQL Server has been installed first to AONode3 and then AONode4 has been added as a failover partner node, the instance is titled

"SQL-CL-INST\SiteLive" as detailed above. The FCI is using the following shared drives

2 non clustered instances of SQL Server have been deployed as follows:

As you can see, incorporating an FCI into an availability group requires an increased number of cluster nodes to ensure that the availability replicas meet the standard requirement whereby, each replica (SQL Server instance) must reside on a separate physical node. Understanding the different technologies allows you to pull them together to create one incredibly resilient SQL Server system.

Creating yourself a virtual test system will give you a better grasp on failover clusters and availability groups and as always have fun in your work. Post back if you're still unsure and I'll help all I can.

The Connection to the Primary Replica is not Active

In this article, I’m going to talk an issue that I found when joining replica or database on secondary replica to availability group.

In this article, I will show you a procedure to combine SQL Server AlwaysOn with logshipping and to make log-shipping to work even in case of failovers between availability replicas in primary site.

In Level 7 of this stairway, we look at combining Availability Groups with FCIs for both HA and DR protection.