First, I need to create the ADX cluster. Then, one or more databases should be created inside the cluster. I may create one or more tables with columns under each database to populate data. Complex analytical queries are written on the table data using Kusto Query Language (KQL).  KQL offers excellent data ingestion and query performance. KQL has similarities with SQL language as well. KQL allows to write data queries and control commands for the database and the database tables.

In this article, I will discuss about the basics of KQL and will write some queries to get familiar with the usage.

In the below query, there are two statements separated by a semicolon; The first one is a set statement to enable query trace for this particular query. The second statement is a tabular expression statement, which returns the count of records from the ls1 table as a result data after the query execution.

Other Features of Kusto Query

A Kusto query is a read-only operation to retrieve information from the ingested data in the cluster. Every Kusto query operates in the context of the current cluster and the default database of the current cluster. It is possible to write cross-database and cross-cluster queries also. To access tables from any database other than the default database, read permission should be available. To execute cross-cluster query, the cluster that is doing the initial query interpretation must have the schema of the entities referenced in the remote clusters. The details about cross-database and cross-cluster queries are not discussed in this article.

Individual Kusto queries can be written and executed. Also, Kusto supports different types of functions which are good for reusable queries. Functions will be discussed in separate article.

There are some control commands that are used to display data or metadata. These commands start with .show.

I will create an ADX cluster and a database under the cluster. Then, I will ingest data in a table in the database from a CSV file. Then, I will write some Kusto queries and control commands on the table and its data. I will provide all the necessary details to complete the required tasks at each step.

An Introduction to Azure Data Explorer may be referred for the step-by-step process of data ingestion from a CSV file to the ADX database table. I ingest data from a CSV file in my local drive to a table named ls1 in the ADX cluster created.

The following image shows the data file I am using here for data ingestion and writing queries. Any CSV file may be used for this exercise.

Write the basic queries on my data

Once the data ingestion is complete, I click 'Query' in the left panel to go to the Query tab. I enter the following code and press the 'Run' button. This query should return all the records from the table ls1 having the Winner column value equal to 1.

The result data comes in a row-column format. The time taken for the query execution and the total number of records retrieved are also displayed above the query result. 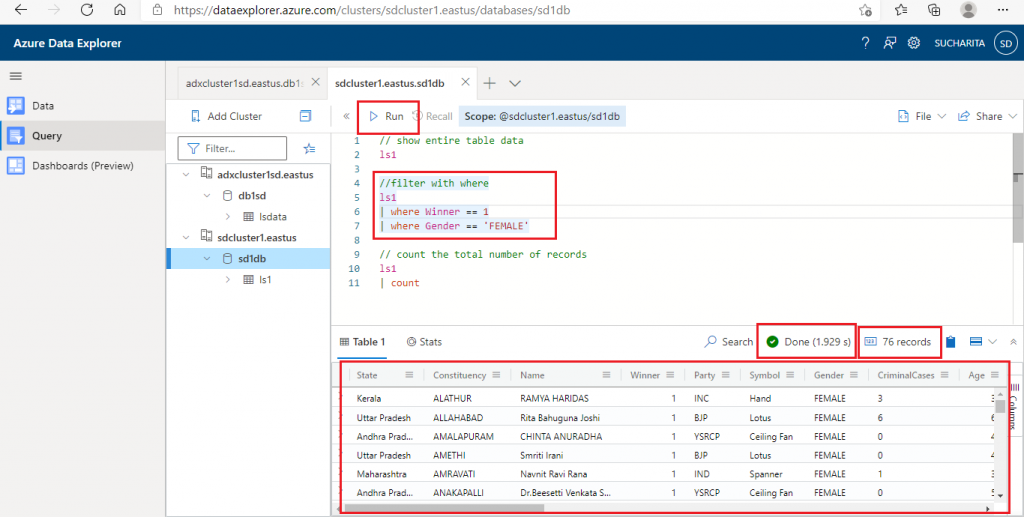 I write few other queries in the Query Window and execute them. All these queries contain only tabular expression statements.

The following query will show the entire table data from ls1.

The next query is to retrieve all the records from ls1 table applying two filter conditions. The table name and the two where conditions are separated by the pipe (|) delimiter.

In the third query, count operator is used to retrieve the total number of records from ls1 table.

In the last query, where and count operator are used together to count the number of records in ls1 table where Winner value is 1.

Use a Few Common Operators

In Query 1, I use the sort, take, and project operators on ls1 table.

This query returns the first 10 records with the three columns State, Constituency and Name from the table ls1 sorted by State column in ascending order.

The output of the query is as below:

In Query 2, same set of operators are used on ls1 table, but in a different order.

The change in order of operators in the query changes the output as well.

In Query 3, I use top, extend, and project operators on the ls1 table.

Output from Query 3 is as below:

In Query 4, I use where, summarize, and render operators on ls1 table.

The result of Query 4 is as below. The diagram shows the graphical output from the Kusto query where the render operator is used. Here, the number of candidates in each state is counted with the summarize operator and then the data is displayed with a column chart. The output data in row-column format is also available in the Table1 tab.

Now I use some control commands in the database. Command 1 is used to create a new table named lscopy having two columns: State and Winner.

The output shows the structure of the new table created.

Command 2 is used to modify the existing table structure of lscopy. Here, I am adding a new column named Name in the table.

The output shows the structure of the modified table.

Command 3 is used to add records in the new table lscopy from another existing table ls1 based on the filter condition of Age greater than 70. Data for the columns State, Winner and Name are copied.

The output shows that 104 records are appended in lscopy table from ls1.

Command 4 shows the structure of the table lscopy.

The output is as given below:

Command 5 is used to drop the table lscopy.

The output shows only the tables existing in the database. ls1 is listed.

In Query 1, after on clause, only the column name State is mentioned as this same column name is available in both the tables. But, in case we need to compare the columns from the two tables having different names, it should be mentioned as: $left.State1 == $right.State2

After the join clause, kind parameter may be used to mention the type of join. Default type of join is inner join.

The output is as given below for the inner join between lscopy and ls1 table on State column (present in both the tables).

The columns having the same name in the two tables are displayed with a suffix 1 for the right table. The State column is displayed as State1 for ls1 to distinguish it from the State column of lscopy table.

The output is as given below:

Records with Age = 58 and Winner1 = 1 values are only retrieved in the resultset.

In Query 3, the join kind is specified as leftouter to do the left outer join between ls1 and lscopy tables.

The output is as given below. For the records that are only present in ls1 but not in lscopy table, the lscopy column values are coming as blank in the output dataset. Here, left outer join happened between ls1 and lscopy table on State column.

Kusto Query Language is used to query large datasets in Azure. Besides Azure Data Explorer, it is commonly used to query data from other services like Azure Application Insights, Azure Log Analytics and Azure Monitor Logs. Structured, semi-structured (JSON like nested types) and unstructured (free-text) data can be processed using KQL.  This is easy to write and similarity with SQL language helps to learn quickly. I have discussed the basics of KQL in this article to start working on Azure Data Explorer. Detailed discussion about Kusto Query Language may be done in upcoming articles.

Learn how you can use Polybase technology in Azure Synapse to load data into your warehouse.

Learn how to create a Synapse resource and upload data using the COPY command.