An interview with Josef Richberg - The Exceptional DBA of 2009

Josef Richberg, a DBA with HarperCollins Publishers, has been selected by judges and the DBA community as winner of 2009’s Exceptional DBA Awards, sponsored by Red Gate Software. Freelance writer Bob Cramblitt spoke to Richberg about the role of the DBA and the importance of sharing knowledge with the community. 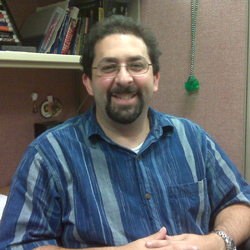 Richberg has more than 16 years of DBA experience. At HarperCollins, one of the largest English-language publishers in the world, he designs and creates SSIS packages and load programs that collect data from the company’s daily database and on a nightly basis process it for two or three dozen applications.

"A hallmark of
an exceptional DBA
is knowing your
system and being
able to make
it run optimally."

Perhaps more importantly to the judges and voters for 2009’s Exceptional DBA Awards, Richberg shares information with the community through Twitter and his SSIS-SQL Server Tidbits blog

Here’s what Exceptional DBA Awards judge Rodney Landrum had to say about Richberg: "When he states [in his nomination form] that 'with each new environment I am reinforcing existing knowledge and learning new techniques,' it says to me that Josef will never be satisfied with routine and will always strive to apply new skills to old problems, as only an exceptional DBA would."

After learning he had been selected as the winner of 2009's Exceptional DBA Awards, Richberg spoke to Bob Cramblitt.

BC:
“In your nomination form, you list three characteristics of an exceptional DBA: learn, exchange and mentor. How did you settle on these three characteristics and why do you think they are so important? ”
JR:
“I've always been eager to learn, develop a new understanding, and obtain new information. As I collected information over time, I realized that some DBAs didn't possess certain types of knowledge. It didn't do any good for me to come in as a consultant, fix a problem, then walk away. If the other person doesn't understand the problem and how I came to the solution, it's a waste of time. That's where exchange comes in.

The mentor comes in when you not only teach, but engender an interest in how something is done. It's taking someone by the hand and showing him or her what you're doing in great detail. It works both ways. I may have been doing this for years, but then someone comes along out of the blue and says, "Did you think of this?" and I'm thinking I never would have thought of that.

Learn, exchange and mentor are actually a circle. I learn, I exchange with others, I help mentor to foster that knowledge, then I come back to learn and exchange. ”

BC:
“Did you have mentors who passed on valuable lessons to you? ”
JR:
“Yes. One was the manager who hired me for a consultant's position. He told me that his role was to make sure that people can interact. He said something that struck me to this day: "I can teach you anything you need to know, but I can't change how you act or who you are." That was big for me. It's more important to be able to interact with people than to just know something.

Another lesson I remember was from a gentleman in the same company who reviewed my code. Before he returned the code to me he would align and order it. I asked him why he did this and he replied: ‘You'll see as you get further into it. When you start aligning things, pictures appear and you'll look at whole sections of code in a different way.’ Sure enough, today as I align things in my own quirky way people at work know my signature as a programmer, and it catches on.

Both of these lessons are not about what you do, but how you interact with others. ”

BC:
“What does the Exceptional DBA award mean to you? ”
JR:
“I'm happy to receive this award, because it encourages me that the community believes what I believe – that we are all specialists and we should be recognized as such.

Over the years I've been called in to fix a lot of code and it's almost always been written by an application development group, because people don't look at SQL as its own specialty. They look at C and that's a language. They look at Visual Basic and that's a language. A web developer is part of a group. But a SQL developer, that's usually anyone who knows how to write basic SQL.

People need to realize that this isn't true. If you can get data in or out of a database, you're considered a SQL developer, which is unfair to the application developers who do not have the experience and expertise required to write the most appropriate SQL code.

I believe wholeheartedly that SQL developers need to band together by exchanging, mentoring and learning, and by projecting to the world that we’re not just an afterthought – we are our own group with our own specialty. ”

BC:
“You said in your nomination form that one of your biggest challenges is not to get stuck in a rut. How do you do this when you're essentially dealing with the same type of data day in and day out? ”
JR:
“I look at each design, each performance tuning assignment, each system upgrade, as a never-before-seen opportunity. I apply the different tips and tricks and knowledge that I've acquired over my 16-year career and reassess that knowledge, making sure I'm not arrogant and overlook something that was different and might be valuable. I'm always trying to expand my mind by reading. Sometimes what I'm reading doesn't seem directly relevant to a problem, but later I'll come back and say, "hey, I can use that." ”
BC:
“You've said that you decided to become a DBA because it's the only truly challenging career in software. When did you discover the myriad challenges of a DBA? ”
JR:
“When I started working with SQL as a language and I realized that there are dozens of ways to do the same thing. Even if you do the exact same thing, there are differences in the type of server, the number of CPUs, the memory, the disk. It's always changing, always evolving.

SQL Server is never by itself; any little piece that you add or change in a large application changes the dynamics altogether. As a consultant I would go to different clients that had similar setups, or totally different setups, and every time I had to go back into my bag of knowledge, experience and tricks – dump it all out on the table and sort through. That experience really helped me refine my skills, but it also gave me the sense that I will never be at the point where I can say I know it all. ”

BC:
“What do you think will be your biggest technical challenge over the next two to three years? ”
JR:
“It's more of a tactical challenge. I am part of a small group that manages all the data warehouse databases at HarperCollins, but the servers and the networks are managed by different groups. The challenge is to technically align all of us so that when we have an issue we work as one combined group. Our dataset is getting very large – we have one table that comprises 340 million records, more than 18 years of data that keeps growing because this data is used for trending and analysis. We have to be very careful as a unified group about how we manage, use and access that data. ”
BC:
“What professional accomplishment are you most proud of? ”
JR:
“From a geeky technical perspective, it's a project for one of my former employers. The company had a process that took 96 hours to complete and I was able to reduce it to eight hours. If there's one thing I love it is making things perform as fast as they can. A hallmark of an exceptional DBA is knowing your system and being able to make it run optimally. ”
BC:
“You place a lot of emphasis on sharing with the community. Why is that so important to you? ”
JR:
“It's important because there are other DBAs across the world who might have similar issues and situations, and there's no way we can all get together in one spot.

I blog and tweet because when I come to a solution I know there's a good chance someone will need a similar solution at some point. There's no need for the hundreds of thousands of us who are out there to constantly reinvent the wheel. If I find something interesting, I'll tell everything I know. I'm not going to hold anything back.

If everyone in the community would blog about all the tips and tricks that they have found in their years of experience, we'd all be better off. That way the community evolves and we reinvest in ourselves. ”

Josef Richberg is an exceptional person: The Judges of the Exceptional DBA Award were quickly proved right in their decision to choose him, when he subsequently showed extraordinary resilience and determination in the face of an unexpected diagnosis of cancer. His determination to deal positively with a difficult life-event is surely a source of inspiration to all of us.

Meredith Ryan: DBA of the Day

Meredith Ryan – DBA at the Bell Group –was elected by judges and the SQL Server community as the Exceptional DBA of 2012. So who is Meredith, and how did she become a DBA? What makes her exceptional at her work? Simple-Talk sent Richard Morris to investigate.

The 2012 SQLServerCentral/Exceptional DBA Awards Party at the PASS Summit

The 2012 SQLServerCentral party at the PASS Summit is on and will once again include the awards ceremony for the Exceptional DBA of 2012. Get your tickets now.

The 2012 Exceptional DBA awards are back. Learn how you can enter and win a trip to the 2012 PASS Summit.

Tracy Hamlin, Exceptional DBA of 2010, on what it means to go the extra mile

An interview with the Exceptional DBA of 2010, Tracy Hamlin.