Accountants sometimes break up a year based on a series of quarters divided into two four-week periods followed by a five-week period sometimes referred to as a 4-4-5 Calendar. In Part 1, I introduced one way to determine the Year of a date based on this kind of calendar. In this article, I will demonstrate a way to determine the Period of a date. The Period is similar to a month, but I use the term Period instead because the division could span actual months and I do not want to confuse Period 1 with January as Month 1. Also, if the calendar starts in a different month than January, then Period 1 should still represent the first division of the year. I will describe the function, give some samples, and then talk briefly about the performance of a function versus a set-based operation in SQL Server.

I chose to use a function in order to demonstrate the calculation process based on any starting date and any starting day. This also allows me to demonstrate the calculation process that can be adjusted to populate a table of division dates. The function takes in three parameters: @Fiscal is the starting month and day of the fiscal year with the year 1900, such as 1/1/1900 or 7/1/1900; @TestDate is the date in question; @Weekday is an integer used for the day of the week to start the accounting process. The function returns a string that represents the Year and the Period, such as 2008P04 for the 4th Period in the year 2008.

Once @FiscalStartAdjusted is determined, the next step uses the difference in the number of days between @FiscalStartAdjusted and @TestDate. Using this difference, you can determine the Period by comparing the difference to the break points that happen in the 4-4-5 accounting scheme. In such a scheme, there would be 28 days in the first period, 28 days in the second, and 35 in the third, so, the break points would be 28, 56, and 91.This pattern would repeat for each quarter in the year. On occasion, the last period of the year will have 42 days because the 4-4-5 scheme divides the year into segments that do not follow the actual length of a calendar year.

In the CASE statement, I first check if @DaysDiff is greater than 371. This should never happen, but I include it here just in case. Next, I check to see if @DaysDiff is less than 0. When this happens, it means the date is actually in the 12th Period of the previous year. After checking these two particular cases, begin checking the number of days against the break points for each Period starting with the latest, i.e. 329 days for Period 12. Work your way down through the break points until you reach the correct break point as compared to @DaysDiff. This gives you the string that Period designation which then is returned from the function.

To demonstrate the function, create a table with a fiscal date field and a test date field.

Insert an assortment of data into the table.

Next, call the function in a simple SELECT statement. I return the original FiscalStartDate and TestDate from the table so that I can see the two pieces of information that give the output string. Here, I hard code a 1 for @Weekday to start the accounting on a Sunday. 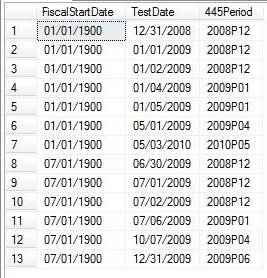 Functional Versus SET Based

This functional solution was built in a scenario where the sets numbered in the thousands of rows and were used in reports that were run four to five times a month. Additionally, the fiscal start date and starting day fluctuated regularly. A functional approach can work for smaller data sets like this, but can easily and quickly suffer from scalability problems with larger data sets in the hundreds of thousands or millions. It is beyond the scope of this article to demonstrate this with the function presented, but a fairly basic predefined table of break points would offer evidence that a Set-based operation provides much better performance and scalability, especially with larger data sets.

In the several 4-4-5 Calendar implementations I have seen, it seems that every company has its own unique requirements. Hopefully, I have provided a starting point and information that can be helpful if you are starting down this implementation road. To summarized briefly, take the Start Date for the Fiscal Year and adjust it to the starting date for the 4-4-5 Year. Then, count the days between the date in question and this adjusted starting date. Using this difference, determine the Period for the date based on the break points for days in the 4-4-5 Calendar.

New author Cliff Corder has a SQL Server function to report on a 4-4-5 Calendar Accounting Year.

Function for splitting the values in string, applying logic and concatenating back to string.

How to Handle Calculations Related to fiscal year and quarter

SQL Server's own list of functions is limited as far as what is available for database developers to use in their applications. Starting with SQL Server 2000, database developers were given the ability to create their own routines that accept parameters, perform custom actions and return results.