Accountants have devised various means to break down financial periods for their purposes. Most people are familiar with a fiscal year, but another dividing technique is referred to as a 4-4-5 Calendar. This practice involves breaking a year down into quarters, just like a fiscal year, but the difference is that each quarter is divided into two 4-week periods and one 5-week period. It can be organized as 5-4-4 or 4-5-4, but the 4-4-5 breakdown is the most common. One advantage of this technique is that each period ends on the same day of the week. This is useful when planning shift or manufacturing work. A disadvantage is that this technique results in most years having 364 days and every few years there is a year with extra days. Both its advantages and disadvantages create particular issues for a programmer trying to generate reports based on this technique. In this two-part series, I will offer possible solutions for determining both the 4-4-5 Year of a given date and the 4-4-5 Period of a given date.

The first complication is that the year does not always start on the same date. It should always start on the same day of the week (e.g. Sunday), but the date changes. For example, the first Sunday in 2008 is on the 6th of January. But in 2009, the first Sunday is on the 4th. The second complication is that the last day of the year may fall in the next physical year. Again, as an example, the last day of 2008 is actually on 1/3/2009.

The following function is useful in queries to return the 4-4-5 accounting year for a given date. The parameters for the function are a starting point for the corporate fiscal year, the date that you want to test, and the weekday to start the counting. The starting point of the fiscal year should be represented by the first day of the month for the fiscal year and the physical year 1900, such as 7/1/1900. The function returns a string in the format "Year yyyy (Starting mm/dd/yyyy)" where yyyy is the year in which the test date falls, and mm/dd/yyyy is the first date in which the given weekday occurs that year.

At this point the work would be done except if the test date actually falls before @FiscalStartAdjusted. In this case, the test date belongs in the previous year. To fix this, subtract a year from the original fiscal start date (@FiscalStart). Then, reapply the logic to adjust the date to the first @Weekday of the year. Finally, format the string to return.

To demonstrate the function, create a table with a fiscal date field and a test date field.

Insert an assortment of data into the table. The following sample data can help show how a date that appears in a particular physical year will actually belong in the previous year based on the criteria for the accounting function.

Next, call the function in a simple SELECT statement. I return the original FiscalStartDate and TestDate from the table so that I can see the two pieces of information that give the output string. Here, I hard code a 1 for @Weekday to start the accounting on a Sunday. 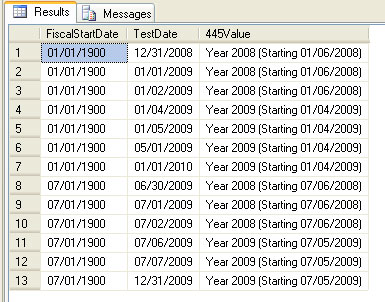 Determining a date's year based on a 4-4-5 accounting method is fairly simple using this interpretation. Find the first @Weekday, adjust the year if needed, and return the string. Now, if you do a little digging you may find that sometimes a year will end up with an extra week, like 2006. This is an unfortunate side effect of this accounting method. There are other interpretations of how to do the actual accounting, but this method has worked well in my applications and is straight forward.

A more difficult task is to determine a date's 4-4-5 "Period". The Period is similar to a month designation. There are certain boundaries that must be calculated that make the function a little more complicated. Look for the implementation and explanation of the 4-4-5 Period in Part 2.

Function for splitting the values in string, applying logic and concatenating back to string.

How to Handle Calculations Related to fiscal year and quarter

SQL Server's own list of functions is limited as far as what is available for database developers to use in their applications. Starting with SQL Server 2000, database developers were given the ability to create their own routines that accept parameters, perform custom actions and return results.