Stairway to AlwaysOn Level 1: What is "SQL Server AlwaysOn"?

Welcome to the first level in the series "Stairway to SQL Server AlwaysOn". In this Level 1 article, we will discover the technologies "AlwaysOn", "Failover Cluster Instance" (FCI) and "Windows Server Failover Cluster". We'll look at each in detail and summarize where in the High Availability stack they sit. This will provide us a sound foundation, which is essential for the ascending stairway levels. Higher level stairways will research the required infrastructure and the different storage requirements and options that are used with AlwaysOn Availability groups and FCIs.

After each stairway level you will gain a further understanding of how the AlwaysOn structure is built.  Although as a DBA, you may not have any direct interaction with the core infrastructure items underneath AlwaysOn and FCIs, it helps to have a full understanding of how all the technologies integrate. The final stairway will result in a functional AlwaysOn configuration.

We’re going to look at the basics first, which includes a brief description of each of the 3 technologies already mentioned.

There are many acronyms and abbreviations used in the AlwaysOn descriptions. We have included a glossary of common terms at the end of this article.

Without further ado, let's delve into a look at each of the technologies.

Windows Server Failover Clusters provide the ability to combine multiple computer nodes (physical and\or virtual) to service a set of applications for high availability. An application is server software such as SQL Server or Exchange, that we want to be able to run on any of the nodes. An application is made highly available by presenting to clients a virtual access point, comprising a unique IP address and a unique computer name or "virtual network name". This address and virtual name become resources in an application group and are passed between participating nodes like tokens. A critical hardware failure of the active computer node would result in the loss of the group service(s) running on that node. The cluster service would automatically attempt a restart of the group on the current node or a partner node, depending on the type of failure (hardware or software).

At a high level, the client access point details are transferred along with any disk and service resources to a failover partner node. A failover of a clustered instance causes disconnection of client connections; the clients may then reconnect once the service is available on another node. The common failures usually are one of these, but any failure of the application could cause the service to move to another node:

With WSFCs, clustered applications are installed into separate groups or "Applications", which contain a set of resources such as disks, services, IP addresses, etc. The group and its resources are owned by a single node at any one time, and the resources are not accessible from any other partner node unless a planned switch or a failover to that node occurs.

A typical view of a Windows Server Failover Cluster is shown below. The cluster nodes are all connected by a network, and the domain controller and DNS service work with the WSFC to allow clients to connect to the virtual IP or virtual network name, no matter on which node the service is actually running. 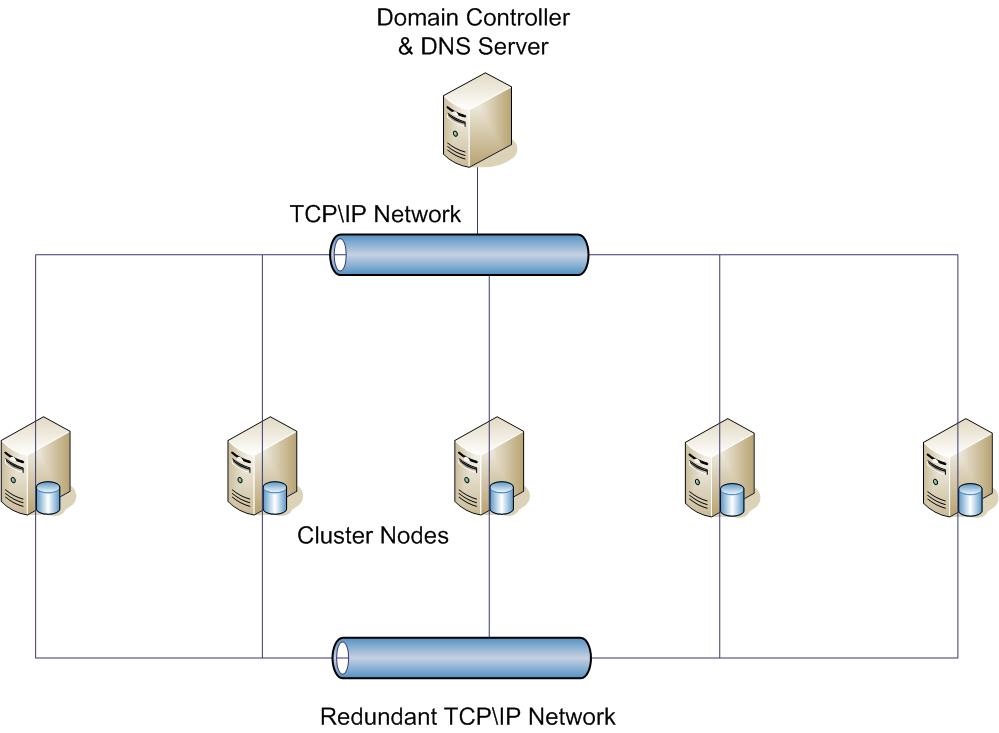 It is important to know that a WSFC provides failover partner capability only. The applications are not load balanced or scaled out across the nodes. Each service runs on one and only one node.

Typically, in large multi node clusters you install your clustered applications across a subset of the Windows Server Failover Cluster nodes. Making the mistake of installing the applications across all nodes can cause some undesired failovers and, as we'll see later, also violates the AlwaysOn group restriction policy which ensures that all AlwaysOn instances are homed on separate nodes in the cluster.

The WSFC requires some form of mediation to control cluster resource ownership. This mediation is provided in the form of Cluster Quorum. Since Windows 2003 SP1, this Quorum takes the form of a node voting system with the majority votes required to maintain Quorum. You may also use additional quorum resources in the form of a disk for localized clusters or a remote file share for multi-site clusters. Starting with Windows Server 2012, Quorums utilize a Dynamic Node Weight Configuration to balance cluster votes dynamically during a planned outage to prevent unnecessary failovers. We will discuss Quorums in more detail in future levels.

Failover cluster instances of SQL Server have long been a popular High Availability technology within the SQL Server product. A highly available instance of SQL Server is clustered to mitigate any node hardware failures and any potential software failures. The only weak link here is the storage; the storage subsystem becomes the Single Point of Failure. 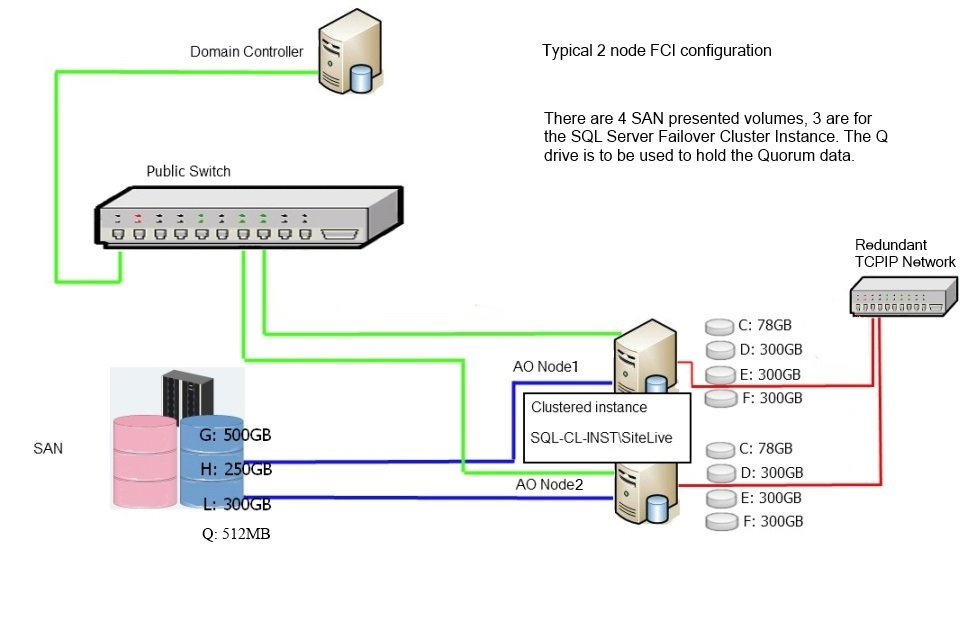 Referring to the diagram above, we see a typical view of a 2 node cluster with a single FCI. A clustered instance of SQL Server will utilize any shared storage that has been presented to the WSFC nodes. Usually this storage will take the form of LUNs presented from a SAN. An FCI of SQL Server is deployed in a 2 step process which will be covered in a later stairway. For now, here’s a basic overview of the 2 step process to deploy a Failover Cluster Instance of SQL Server:

Note: Although Standard Edition limits a FCI to 2 nodes, this does not dictate how many nodes have membership of the Windows cluster (you may have any number up to the Operating System maximum). The limitation is enforced at the SQL Server installer level.

An FCI is a little like a running track relay team hand-off process; a computer node owns the clustered SQL Server application and its resources and then provides access to clients to the SQL Server service (holds the baton). Upon failure of the active computer node (dropping of the baton), a partner node steps in and takes ownership of the clustered application and its resources (picks up the baton).

Whereas clustering works at the instance level, AlwaysOn is configured on the database level. AlwaysOn Availability Groups are the new technology introduced in SQL Server 2012 to replicate pre-defined groups of databases to a set of Read Only partner instances, or replicas, as they are known in AlwaysOn. Multiple nodes each host a synchronized copy of the AlwaysOn database(s), and access is best provided by the configuration of a listener (more on this shortly).

Secondary Read Only replicas may be configured to respond to read only queries, you may also target Secondary’s for backup\maintenance operations to relieve the pressure on the Primary database. This Primary to Secondary relationship is also reversible to ensure true High Availability. Any Read Only partner that is appropriately configured may assume the Primary role in the event of a failure within the system.

AlwaysOn relies on the WSFC core functionality to achieve the high availability that AO offers, but does not require any of the following shared resources associated with an FCI.

There is one exception to this shared resource rule. When creating an AlwaysOn group listener, this will create an IP Address and Network name resources that  will be shared by the AO group replicas.

As we have discovered, the weak link in the chain for Failover Cluster Instances is the shared storage. There are many ways to achieve redundancy here, but it usually comes at significant cost, and it is often difficult to setup and maintain. Of course, as previously mentioned, a failover cluster instance only mitigates the server hardware. It does not provide a single or even multiple secondary databases. We have database mirroring in SQL Server versions prior to SQL Server 2012, but these only provide scope for a single, non-readable, secondary database.

AlwaysOn still uses the familiar SQL Server endpoints for instance to instance communication. Endpoints are automatically configured when using the availability group deployment wizard. The wizard driven deployment offers the easiest deployment route, whereas manual deployment requires a great deal of manual interaction. Despite this, a basic AlwaysOn group configuration is still extremely easy to deploy and configure and offers a level of HA that was previously not available without resorting to complicated levels of feature integration.

You may also create a highly available listener service, which you will use to accept incoming connections to the availability group. The listener consists of a unique IP address and a unique virtual network name. This is by far one of the most significant changes in making the databases within the group highly available.

During the creation of an AlwaysOn Availability group, a clustered role is created within the Windows Server Failover Cluster and contains a single resource. This resource is failed over between partner nodes during an AlwaysOn group failover and identifies the Primary replica for the AlwaysOn group.

The listener, when configured, will be created as resources and reside within the Failover Cluster application\role for the AlwaysOn Availability Group. The resources are:

This concludes level 1 of the stairway, which offered a quick introduction to 3 core technologies used to make our SQL Server instances and their objects highly available. In our High Availability stack we have the WSFC as the base level, which is the primary requirement for an installation of an FCI or an AlwaysOn Availability group. Next we have the FCI, which sits atop the WSFC and relies on the cluster to serve and protect the SQL Server instance. Lastly we have the AlwaysOn group, sitting atop standalone instances of SQL Server and\or Failover Cluster Instances of SQL server.

In Level 2 we will look at the storage types available and their typical usages within SQL Server High Availability. This will help you to understand future Stairway levels in the series.

In this next level of the Stairway to AlwaysOn, we will look at the components required to implement a Windows Server Failover Cluster.