Restore a Backup of a TDE Database to Another Server: Level 2 of the Stairway to TDE

In Level 1 of this Stairway, we discussed how to configure TDE in a user database using a Database Master Key and Certificate. In this level, we explain the steps for backing up and securing this certificate, as well as how to restore the database on another server instance.

Backup the Certificate and Private Key

We need to use the BACKUP CERTIFICATE statement to take the backup of the certificate. We got a message after creating the DEK in Level 1 that we needed a certificate backup. This is how we perform the backup.

This script will create a TDETest_Cert file and TDETest_CertKey.pvk private key in the location 'D:\tde\' in source server.

Note:  The BACKUP CERTIFICATE command does not have the option to overwrite the existing file. Hence,TDETest_Cert file should not exist in the location specified while taking the certificate backup.

This section describes the steps to backup and restore the TDE enabled database backup to another instance. The steps involved include the backup of the database, the restore of the certificate backup to the destination server, and finally the restore of the database backup. Some of these steps only need to be done once, as subsequent restores will complete without issue, as long as the certificate remains the same.

We start by issuing the BACKUP DATABASE statement to take a full backup of the TDE enabled database, TDETEST.

Restore this database backup in the new instance

We can issue the RESTORE DATABASE statement to restore the database to another server instance. While performing the restore, you will encounter the below error if the certificate that we created in the first section is not imported. The reason is the certificate that was used to encrypt the database on the source server is not available on the destination server instance, and thus the data cannot be decrypted.

We can see this when we run this command. The results in Fig 3 show the restore cannot complete.

The below steps will show how to restore the TDE enabled database backup to the new server instance. The steps to be followed in the destination server are shown below.

Once this step has been completed, it doesn't need to be repeated for future restores.

WITH PRIVATE KEY        -  specifies that the private key of the certificate.

The below figure shows the expected result after execution. 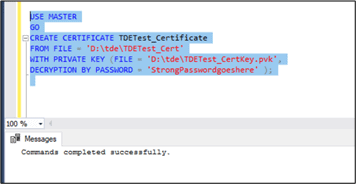 Once this step has been completed once, it does not need to be repeated for future restores.

Once the certificate and the private key get imported to the destination server, the restore process will be successful. 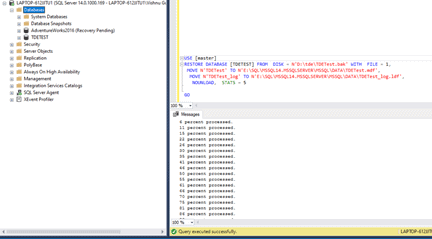 This stairway article explains on how to restore a TDE enabled database to another server instance. It depicts the steps to backup the certificate from the source server and restore it on the destination server for the successful database restore.

Also, it is important to use strong passwords during the certificate backup step and assure that the keys and passwords are managed to keep  them safe with proper backups and security.

In this third level of the Stairway, we examine how to store your encryption certificate in the Azure Key Vault.

The first level of the Stairway to TDE will explain how the feature works and how to set this up on one of your instances and databases.

Configuration of SQL Server Always on in Azure Virtual machines differs in multiple ways comparing with the on-premise Implementations. This article will help you to have a handy note to configure always on in Azure servers from a DBA perspective.