What Will We Take For Granted Tomorrow?

Today we have a guest editorial from Tim Mitchell. 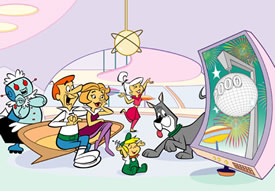 Recently I caught a snippet of a

take for granted. He points out that in his short lifetime we've gone from

corded, rotary telephones to everyday communications devices that literally get

routed to and from space. Coast-to-coast trips that used to be measured in days

can now be covered in the time it takes to watch a couple of movies. And yet

despite having been witnesses to this transformation, many of us simply take

by cell phone, and air travelers often turn into angry mobs when their flights

are delayed. A more recent example of this was the brief glitch in Twitter that

caused everyone's followers to disappear. A technology nobody had heard of just

three years ago suddenly doesn't work as expected, and it's as if the fresh

water supply has been shut off.

I'll admit to being as guilty as anyone for

taking these things for granted. But at the same time, I can't help but wonder

what advances will occur in the next 10-20 years that will, eventually, become

blase. When will the day come when we talk about when people used to die

from heart disease, cancer, and diabetes, in much the same way that we refer to

smallpox and tuberculosis now? How long before advances in transportation bring

an end to urban gridlock, relegating the phrase Road Rage to something we talk

about in "remember when" stories? In my lifetime, will I see the day when a

developing hurricane won't even make the news, because we have developed the

technology to interrupt its destructive cycle?

Closer to topic, one must wonder

how our roles as technologists will evolve. Though it feels like we're many

years away from these things, I envision such things as self-healing and/or

self-replacing hardware components; code that is truly device- and

platform-agnostic; DBMS systems that would dynamically build, drop, and optimize

indexes on the fly; or perhaps even portable, universal, and effective identity

authentication. There have been steps taken toward all of these things, and,

while they have not been realized yet, those of us with an understanding of

are overcome. More importantly, for those of us who make a living on today's

cutting edge technology, it's hard to imagine what kinds of problems we'll be

freed up to solve, once many of the difficult tasks of today become just a

memory, absorbed in a whirlwind of automation and intelligent software.

So the question is not if these

things will come to pass, but rather, how long will it be before we take them