The Cult of Mediocrity 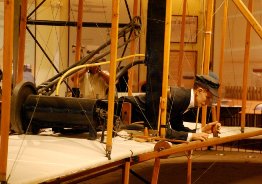 This guest editorial from Michael Coles was originally published on Aug 1, 2007. It is being re-run as Steve is on vacation.

Hey, did you hear the one about the two brothers who spent years trying to make a bicycle fly? Or the guys who started a major computer corporation in their garage? Or the guy who dropped out of college to start one of the largest software companies in the world? You have? Well, can you tell what all these stories have in common? Here's a hint: they're all true, they've all achieved near-mythic proportions, and they are all about risk takers.

In America, risk is usually seen as a good quality. It puts the "great" in "greatness", and makes the impossible possible. Without risk we never would have reached the moon. Or defeated the Nazis. Or spent $18 on "Spiderman 3" tickets (some risks don't pay off as well as others...)

The flip side of risk, of course, is the potential reward – the "big payoff". It seems to be what's missing these days in the middle and bottom rungs of many big companies. Risk/reward is not just a high-falutin' management concept anymore. Regular employees also perform on-the-job risk/reward analyses too. Risk-averse cultures can be discouraging, in much the same way that an anvil landing on a minnow could discourage it from swimming.

I recently spoke with an old friend who's stuck in the risk-averse culture of a big company. We'll call him Joe. Joe recently decided it's in his best interest to be less of a risk taker on the job. Joe has a very good track record of identifying issues and bringing solutions to the table; but he no longer offers suggestions. He's a very hands-on and detail-oriented person; but he no longer volunteers to implement. The fact of the matter is that Joe quickly learned he can earn an "average" review rating and 2% "industry standard" raise with near-zero risk, just like everyone else on his job.

Businesses that don't nurture risk send a loud and clear message to their employees: "Excellence does not fit in with the business model and mediocrity is the order of the day."

Are you a risk-taker on the job? Does your job encourage risk taking? Or is the potential reward (if any) just not worth it?