Holidays and other Social Technologies 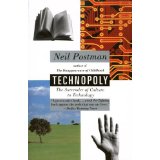 Today we have a guest editorial from Bill Nicolich.

This scenario seems to be stereotypical. The more outward-facing departments in a company, like the sales and marketing departments, will decorate the place and get involved in Halloween and other holidays. The more internal departments, like Technology and Accounting, will mostly ignore the event and won't participate. That creates a sort of cultural divide, though there are always exceptions.

This holiday cycle has got me thinking again about what passes for technology.

In the culture I'm in, living in the USA, technology mostly refers to computer technology. The last thing on people's minds when they think of technology are things like holidays and celebrations. But they are. They're social technologies designed to heighten social interaction, mark the passage of time, create anticipation and so forth.

Ever since reading Neil Postman's book Technopoly: The Surrender of Culture to Technology, I've been interested in broadening out the definition of technology to include far more than computing, and to include things like the various emotions in our register as a species, games, rituals and the like.

The question is, does that get me anything to have a broad definition of technology?

Well, I think it gets me a way to get more perspective. I get more options. Instead of reaching into the pocketbook and buying a new gadget to promote my children's education, I can think about how they used to use a piece of chalk and slate and seemed to do quite well in learing the ABC's and 123's - and maybe money spent on caring educators might do better.

So, as I look at that I guess I buy into it. I see more reasons to participate in activities that seem on the face of it to be somewhat of a time sink - like decorating and participating in holiday activities.

These are ancient technologies that our species have utilized to good effect - and even in a modern context, they seem to stand up for reasons that pop up on the radar of conscious awareness and strategic action.

There's this book that I'm excited about: Finite and Infinite Games: A Vision of Life as Play and Possibility by James P. Carse - and for me, this is an area that's really interesting for several reasons. One, it's about cultural technology. Two, it belongs to an area that is widening up - that is creating more awareness around play at work similar to the book Reality is Broken: Why Games Make us Better and How They Can Change the World.

There's the suggestion that although not intuitive, there's areas to look at that can enhance what we're doing at work.

I suppose we're running into the same problem with how games are defined. They're increasingly defined as video games - whereas a broader definition includes the dating game, the career game and other games that involve strategic action in the face of various challenges.

Lastly, I think there is a dialectic to look at regarding Halloween and holidays. You have two poles representing perspectives on participation with one that says absolutely not and the other with absolutely yes - and let's spend half the budget on it.

In the middle is an area of conflict between the two sets of values, one more social and the other more individualistic. There's the chance in the middle where values collide to learn how to integrate the values and then go from antithesis to synthesis.

So, I did a little walking around and talking about it with team members - primarily because I truly value understanding who I work with and learning to appreciate their perspectives and personalities. I learned something and I encountered some strong opinions. So, doing that was very worthwhile.

For me, I'm going to go in the middle where values and things tend to collide and look to learn something.

What are you planning to do?