Bias, the Serial Killer of Diversity

Today we have a guest editorial from Kellyn Pot'Vin.

As a woman who’s often placed on Women in Technology, (WIT) panels and asked to do talks and keynotes on the topic of WIT, I’m also asked why we don’t see more diversity in technology. People are so concerned about sexual harassment, workplace hostility, but with as with many women that I mentor, as with many young women/young men that I teach in STEM/STEAM initiatives, I believe that bias is the most dangerous culprit.

We all have bias. It’s shaped by our upbringing, our experiences and the media. It starts with our very first interactions as a baby. Babies that are girls are dressed in pink even before they leave the hospital and boys are dressed in blue - that’s just how it is, and the bias begins. Not all bias is “bad” or dangerous, but to be aware of it and how it shapes our world is important to helping us move forward as a society. It’s essential to improving our culture in the world we live.

We’ve all seen similar numbers as to the ones below. It’s almost impossible to find a news branch that doesn’t do at least one story on gender diversity in technology, where diversity was unheard of when I first started to investigate the topic in 2008. I had a desire to understand why the high percentage of diversity, both women and people of color, that I’d started out with in IT in 1997, had started to disappear. 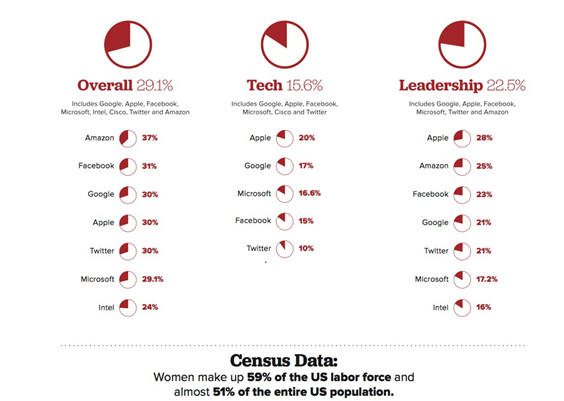 I’ve a history of working on very diverse, global teams, including all races, religions, gender and even one Unix Admin that grew up as a Crips gang member. I wanted to understand where had the diversity that I had experienced early in my career gone and one of the factors I noted, was that if diversity wasn’t making it through the hiring stage, it would soon disappear at a team level as well.

Bias and the Single Girl

At one time, I found myself part of an interview team in search of a new DBA. The position was challenging, as the current work environment required a dynamic, “think on your feet” kind of individual and the process involved team members from a number of groups to ensure the best candidate was chosen. I was the only women part of the interview committee, but I was also the lead DBA. I was known for holding my ground, but I also knew how to pick my battles. My goal was to ensure the needs of the DBA team were met.

As the process of interviewing continued, we came upon a day where two candidates were scheduled for first in-person interviews. The first candidate, a tall, black man, clean cut and more professionally dressed than most of the candidates we’d seen, entered the room. His name and resume didn’t include anything that would have hinted at his race and nothing peculiar occurred during the interview. Everyone asked deep technical, environment and team questions. He was quick to give answers, but they were thoughtful and correct and I was confident that he’d return for a second interview.

Upon his departure, the room was surprisingly quiet. After I attempted to start the conversation on how we planned to bring the candidate back, I was quickly dismissed by the IT manager and he explained we’d wouldn’t be pursuing the candidate further. The rest of the interview team was acting odd, shuffling feet and looking at the floor. There wasn’t anything overt about their behavior, just small, uncomfortable body movements that made me know that something wasn’t right.

I didn’t have much time to think about the situation, as the second candidate was brought in right after the first. This next candidate’s physical appearance reminded me of my favorite DBA I’d worked with in my career. He was very friendly and likable and as we’d all liked the DBA he reminded me of, the committee as a whole was smitten. The committee’s feelings towards him didn’t waver, even though he had difficulty answering a few of our technical questions, and the IT Manager offered the job to him the next day.

He worked with us for three months before we were left with no choice but to let him go. No matter how much we liked him, he wasn’t able to think on his feet in the fast paced work environment and it impacted production and revenue. The most important aspect of the role we were hiring for, wasn’t what we had hired for in the end.

I believe the first time you make a mistake, it’s not a problem unless you repeat it. I was able to see how my own bias, (finding the candidate likable) can be as much of a downfall in hiring as any bias. I was also able to accept in hindsight, that the first candidate was biased against due to his race. Although no words were spoken at the time, it was a topic that I could discuss with my peers later on, learning the incident had significantly bothered everyone involved. Many said they were still processing why they felt misgivings about granting the first candidate a second interview when I’d requested it. As the manager made it easy for them to dismiss the discomfort, the situation wasn’t addressed. I was just as guilty as others, allowing it to happen out of sheer ignorance.

The example above is bias in terms of one situation, but I’ve seen it happen to people of color and women in technology way too often. We have in our mind the idea of who we want in the position as an image of a person we may have worked with or the image of what we think is the ideal candidate. This can have costly impacts:

The interviewing practice of “ensuring you’ll get along with the team” can also help promote bias hiring practices. How often have you entered into an IT team scenario and note that the team members have similar backgrounds, skills and personalities?  They may like to have lunch together or go out to happy hour, but this can be a disaster waiting to happen for the company in regards to the most productive/competent team with the primary objective of serving the company’s needs.

What Is a Great Team?

That favorite DBA the second candidate reminded me of?  We’ll refer to this favorite DBA as “T”. T and I worked together on three different occasions. In all that time, we had lunch maybe twice, and I couldn’t tell you his wife’s name, where he lived, or really anything else about the man. Put us together in a database environment and you had the highest availability and best running database environment in the country!  He was an OLTP DBA who preferred to be left in a corner to simply work quietly. He rarely spoke, where I build a strong rapport with my peers (the IT Manager in this story, upon interviewing me, said, “I’m pretty sure you said more in your interview than T said in the six months he’s worked here.”). I handled a massive workload and preferred OLAP environments, along with any odd database platforms that I found interesting. At the same time, I was known for having small, loose ends that T was great about cleaning up after me. We deeply respected each other’s “territory” and had each other’s back.

So how do we address bias in hiring and deter it from occurring?  The impact of bias is not just seen or felt in the IT world. It was an issue at one time for symphonies as well. During the 1970’s, orchestras noticed that women made up less than 5% of musicians. Upon research, it was found that female musicians weren’t making it past the first interview, even though they may have had the same experience or skill as their male peers.

Recognizing that bias may be a contributing factor, they imposed blind auditions, placing the musician behind a black screen, while they played. The findings were remarkable and the blind audition became a standard for all major symphonies in the US today. Due to this, symphonies are now comprised of over 40% women musicians.

I’m not saying that IT would see improvements in diversity ratios as impressive or that blind auditions would even be possible. However, there are opportunities to improve the interviewing process to deter from the cost of natural bias.

If vague reasons are given for not proceeding with a qualified candidate of diversity, ask the individual with the concerns to clarify their thoughts. Don’t accuse or “crucify” someone who may be feeling bias against the candidate. This is an opportunity to educate as often bias is unconscious, meaning the offender may not even be aware of the bias.

You may receive a response from some regarding quotas or a feeling that special privileges might be given to diversity candidates, even if you are quite aware that they aren’t. There is a great quote that may help understand why they’re feeling the way they are:

“Equality can appear as oppression to those that have always been privileged.”

Understanding how other’s may feel, even if it seems unjustified, can help foster communication and education to help address the challenge of hiring diversity.