Using a Surrogate vs Natural Key

Choosing the primary key for a table is one of the most important decisions you can make when creating a table. A common debate is whether you should use a surrogate or a natural key.

What is the difference?

A natural key is a column or columns already in your data that can uniquely identify the row. For example, if you have a table called HR.Employee, which lists one employee per row, you could use social security number as a primary key. This would be a natural key.

A surrogate key is a key which you create for the purpose of being a primary key. It has no other meaning. The most common surrogate keys are identity or uniqueidentifier columns.

A natural key is already in your data, so it doesn’t require any extra data to store it. A surrogate key must be added. That could range anywhere from 1 byte, for a tinyint column, to 16 bytes, for a uniqueidentifier column, per row for the most common applications.

As seen here, it is very common for the addition of a surrogate key to actually reduce the total size.

Consider the following example. These two databases come from Microsoft’s sample AdventureWorks database. They are identical apart from a change where I removed BusinessEntityID as the natural key database in all tables, keys, and indexes. I used the NationalIDNumber instead. Looking at only the HumanResources.Employee table, you can already see a space savings without even considering the related tables.

In the above example, the table referencing the surrogate key uses less space on disk. This will help reduce IO pressure when reading from that table.

Any index referencing a column with space savings can expect improved performance as well. In addition to the reduced IO of the actual field, any index using the column as a key column will have fewer leaf pages and result in faster searches.

In these example queries, the only difference is the use of a surrogate vs natural key.

When you look at the execution plan below, you can see that selecting from the query using a surrogate key is significantly cheaper. 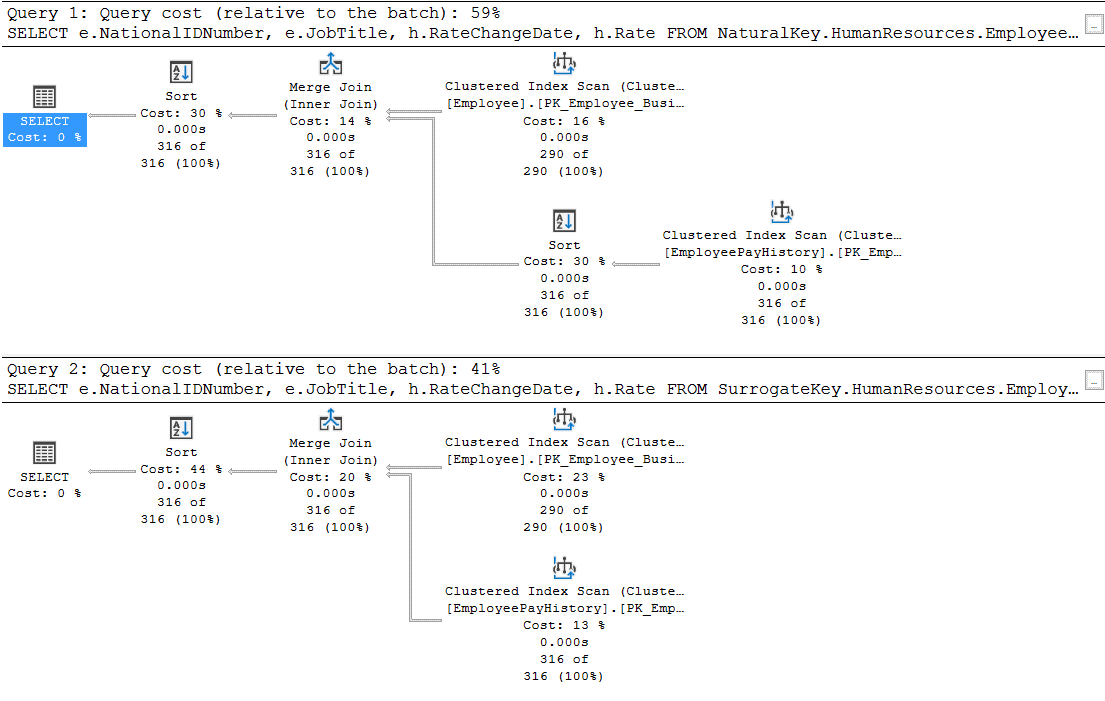 Whenever you insert into a table, the clustered index will determine where to place the new record(s). The database must updated the indexes as well. It will also verify any constraints on the table.

Surrogate keys are more likely to be sequential, if they are defined as using identity or NEWSEQUENTIALID(). Inserts with sequential values will avoid fragmentation problems by always inserting data at the end of the table. Some natural keys, such as time stamps can also be sequential. Some surrogate keys, like ones using NEWID(), are non-sequential. There are also situations where randomized inserts can actually perform better because with high end disk arrays, they can prevent hot spots when writing to a specific disk.

Updating a primary key value can have significant costs involved. Doing so will likely involve fragmenting the clustered index. It will also cause the need to cascade updates to any tables referencing the value in a foreign key.

Surrogate keys have no meaning outside identifying a row, so it is rare to have any need to update them. They can usually avoid this situation entirely.

Some exceptions might include situations where no other table references this primary key, the rows referencing the primary key are fewer than in the table with the primary key itself, there is a natural key with similar space requirements to the surrogate key, or you are dealing with a temporary table.

On a personal note, I like surrogate keys, because they can be hidden from the end user. A primary key is an important programming object. I don’t want end users to care or even know about my programming objects. Using an abstract key like this frees me to make programming choices for programming reasons rather than business or user-experience reasons.

Improving the response times of queries in SQL Server is a common task for DBAs and developers. In this article, we will talk about how you can effectively use covered indexes to improve your performance, and when you should use them.

Security is often something people think about only after they have had a problem. Given that the average cost of a data breach is $3.92 million (SecurityIntelligence 2019) and ransomware attacks have increased 97% over the past 2 years (PhishMe 2019), the "if it's not broke, don't fix it" approach can clearly be catastrophic. Here […]