I was reading the latest Simple-Talk email that linked me to an article on Coding Horror, "Why Can't Programmers - Program?" In the article they talked about a simple test that they gave developers to verify their abilities and decide whether or not to continue the interview. Here's the test:

For each number evenly divisible by 3, substitute 'Bizz'

For each number evenly divisible by 5, substitute 'Buzz'

For each number divisible by both substitute 'BizzBuzz'

I decided to try it out in TSQL. Once I had a solution (it took about five minutes, it would have been about two but I kept getting syntax errors on the CASE statement). I had so much fun that I sent it out to our team to see who else could meet the requirements and I added one more: no cursors are allowed

Before you read any further, try it out for yourself. It's not hard. A solution should take you less than 10 minutes.

Here are the various solutions that we came up with on our team.

I didn't need to use the @s variable for the print statements, but overall, first pass, it was simple and worked fine. I'm assuming I'd still get interviewed although my pay scale may have dropped a grade because I introduced parameters that weren't really necessary.

The next submission came in from Chris:

He fixed my problem with the string, but he introduced a new one. Go back, reread the code and see if you can spot it. Give up? Because he checked for 3 then 5 then the combination, none of his code found the combination of 3 and 5. End of interview. Sorry Chris. It's also worth mentioning that the CASE statement resolves in a single pass where as the IF statements check each condition. Take a look at the estimated query plans: 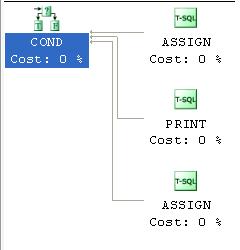 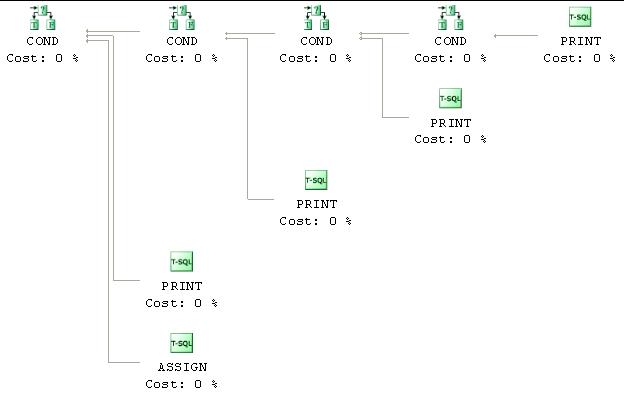 Next came one from Det:

Det's worked very well, but he created a permanent table and didn't include a drop statement. When I went back to look at the query plan, I got an error. We'll continue the interview, but Det shouldn't count on getting a top spot on the team. He submitted a second query as well:

This worked in a repeatable fashion and instead of printing output lines to the message window, it returned actual results. 100 separate result sets, but even so, it worked. Points for perseverance.

Not at all surprisingly, Scott's is dead on accurate and extremely thorough. He reintroduced the extra parameter that I had, but instead of a crutch, he makes real use of it. At this point Scott's at the head of the class

Freely admitted, this is a silly little test and doesn't really demonstrate much in the way of coding skill, or more especially TSQL skills. However, it spawned a lot of discussion within the team. We started running the queries to see what performance looked like. Since most of them didn't do anything approaching data manipulation, there really weren't query plans to look at. Performance was very similar to a degree:

One of the discussions that came up was, shouldn't there be a simple way to do this with a CTE? So after lunch, I set out to try it. This is what I came up with:

T-SQL does some things wonderfully, but cursors are the bane of the language, often causing performance issues. Changing your queries around to remove cursors can be tricky and new author Kamran Ali brings us one technique he has used to dramatically improve performance.

The GO Command and the Semicolon Terminator

There are probably not many SQL Server DBAs that use the semicolon as a statement separator. In SQL Server 2005, this is required in certain places and new author Kenneth Powers brings us a look at where and why you need to use this syntax.

Writing outer joins can be more difficult than it appears at first glance. Steve Jones examines this less often used query technique and brings to light a few places where you can lose data.

SQL Server 2000 has table valued functions that are very useful in many ways. However when you try to limit results with the ROWCOUNT setting, you can end up with some strange results. Peter He brings us a comprehensive look at some of the unpredictable results that you can get and how to code around them.