Recently, I came across a problem where the client reported severe performance degradation of their OLAP system. Most of the reports that were running were either timing out or were returning data after a long time. The problem started right after the client had undergone an upgrade, that included the following,

Here are the specifications of the old and new servers:

I started the investigation by looking through the some of the useful DMVs, like sys.dm_exec_requests, sys.sysprocesses, etc. My initial review revealed pressure on the temp db. Almost all the process that were running slow were waiting on PAGELATCH wait type.

In fact, other than the above wait type, the fact that tempdb was unable to keep up the transaction pressure was also evident by the transaction volume that was hitting tempdb. See the images below (Fig 1 and Fig 2).

At peak, the transaction rates on temp db was close to 4k/sec. 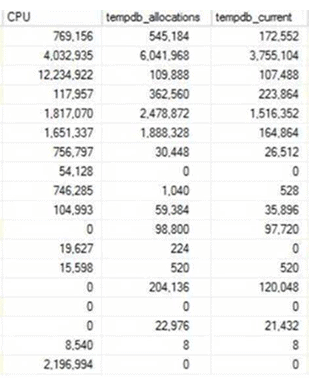 I started checking if the temp db files were set up correctly in relation to the CPUs. I found that there were only 8 temp db files on a 36 CPU server. This was one of the causes of the slowness, and I immediately requested the OP DBAs to increase this to 18, following a standard that my organization follows. We create files equal to ½ of the total CPUs and as needed thereafter.

Though the system performance improved, there were still complains of slowness as users had to wait for a fair amount of time to have their requests processed. Everything seemed normal with no major blocking, memory crunch, CPU spike or the disk latency. However, a closer look at the CPU showed it was seen ranging from 40% to 50%(Fig 3), even during peak activity, whereas, on a normal condition an average utilization of 80%-85% is fairly normal.

When looking at the Task Manager, it was found that around 50% of the CPU were getting threads (Fig 4).

Some followup discussions with the hardware team revealed that SQL Server was unable to send threads across all CPUs due to a non-core-based licensing policy. The problem was every SQL Server 2016 install that was done used older Server+CAL license media. This edition is limited to use 20 cores on the host machine.

To fix this, we needed to use core-based licensing instead for all new installs. To fix this problem in existing servers, a downtime window was approved by the client as it would have required a SQL restart.

An example of the change that was implemented:

The above change resulted in threads being spread across multiple processors,and, the system performance increased massively.

This revelation also led to the correction of the overall CPU licensing policies and tempdb set up during installation, which served as a proactive approach in addressing future client issues, that possibly could have come at later dates.

Additionally, two of the client stored procedures were identified as a 'heavy hitter', in terms of CPU and IO consumption, and, efforts were put in to replace them with an optimized version, that had a better coding approach. The older version of these stored procedures were performing a very expensive operation, through a single transaction, and, this was broken down to smaller batches,along with replacement of CTEs with temp tables.

The above issue was quite an interesting and learning experience for me, and, I felt this was a right medium where I could be share it.

Those who work on various databases, or even those who do not, must have come across the term, Dynamic SQL. Dynamic SQL is basically a programming technique that enables you to build SQL statements dynamically at run time. It allows you to create more general purpose flexible SQL statement because the full text of the […]