Sins of SQL: The Time Table

The Sins of Old: Time_T

When building a cube or other reporting mechanism, quite often it is nessecary to be able to produce a definitive list of times. One of the classic 'Sins of SQL' is to create a table to house time values, with up to 3,600 rows for a single hour if you go as low as the seconds values in your data. The trouble is that then each fact table joins to your time table along the lines of: 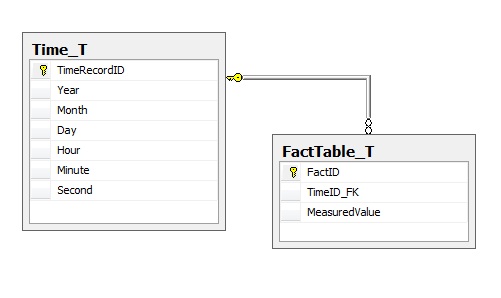 This pattern effectively creates a surrogate identity for time itself, and has some nasty consequences for SQL developers:

Here's an example of the SQL needed to query such a table to produce a simple report:

What we really want is to write something nice and clean like:

This is better from both a maintainability standpoint (no complexity added), but is also better for performances since an index against the FactTime column will allow fast seeking/scanning of specific time ranges within the table. SQL Server will seek to a single row in the index and then keep scanning forward until it reaches the end of the time range, executing the query in no time at all.

It's possible in many circumstances to store both the time-table record key and the actual time at the same time in the table if you've got the space, but this violates a few database design principles (duplication of data in particular), and still doesn't make inserting records any easier. Fear not though, for there is another way.

So if we've established that using a time-table is neither faster, easier to work with in T-SQL, nor good practice - then how does one create time dimensions for use in SQL Server Analysis Services? Using the Common Table Expression feature from SQL Server 2005 and upwards, we can create a helper function such as:

And voila, you can how dynamically generate a list of timestamps between two points in time in T-SQL, such as;

(Note that if you want to produce more than 100 distinct days in a single query, you'll need to append OPTION(MAXRECURSION numberOfDays) to your query, where numberOfDays is the number of days you wish to loop through. This can be hidden away in the stored procedures, and SQL Server allows you to specify a MAXRECURSION of 0, which does not limit the amount of days that can be processed.

Bringing it All Together

Now that you've got rid of the time-table gremlin, the next step is to put your regular timestamp columns back (if you didn't drop them already), and then start building your cube. There are just a few steps required here:

You should end up with something looking much like this: 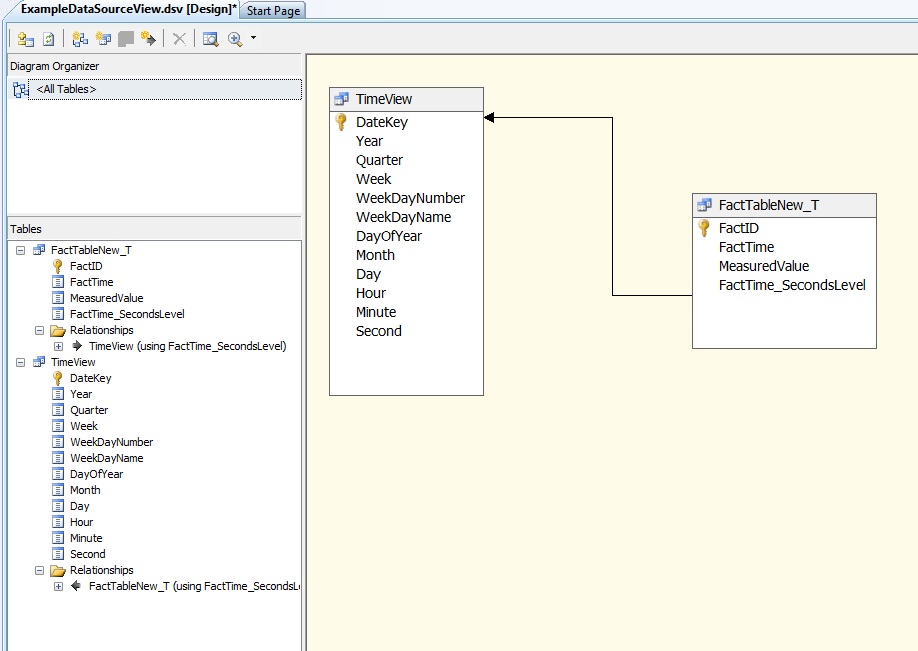 Once you've done this, you can define your date dimension hierarchies (i.e. Year, Quarter, Monty, Day, Hour, Minute, Second) in the designer as usual and start processing your cube. To support incremental loading of the time partition you simply need to pass in the range of time-stamps to the Proactive Caching polling queries, and Analysis Services will take care of the rest for you. It's best to pre-load a few samples worth of time values, or if space-permits pre-allocate several months or years worth of values. This will prevent the need to periodically re-process the time partition at the same time as the fact partition.

Hopefully you'll now be on the cusp of dropping your time-table and numbers tables, or at least scaling back their usage. There's still plenty of room to change and play with this code though - Some useful changes you may wish make to this include:

Share and enjoy. If you make use of this I'd really love to hear about it.

What's this error:Arithmetic overflow error converting IDENTITY to data type int? It was a new one to me, but read on to find out what it means.