If you work with databases which contain hundreds if not thousands of views, functions, tables and stored procedures, sometimes the databases might get so big and complex that it is hard to keep track of dependencies and the structure of the backend of the application. Think about it, a system grows and grows over time, programmers just keep adding more and more functionality, sometimes they dont even remember the functionality was there in the first place, so they add something new, which is the same as something alread there.

The reason I wrote code similar to this to help with my work was a bit different, but the underlying problem was basically the same 'dependencies'. I needed to replicate my code from system to system and do it in a smooth simple way. The solution was to write a script based on the same ideas in this script, which would replicate my code and take care of dependencies. Now I just push a button and a few minutes later my code has been replicated, with detail information and summary information about how the replication executed. Writing that script for myself gave me the idea that it would be nice to have a script which would print me a graph of the dependencies of routines in any database.

I include in this article a script I called the Routine Dependency Map Visualizer. The script generates a graph like output showing for each routine in the database (view, function,stored procedures) all its dependencies as well as all the routines that are dependent on it.

How the script works?

all routines pointing to me

all routines I point to

There are two columns we need to use for these queries, the first one is the well known object_id, which every one knows is the id of a given routine or object in a Microsoft database. The second column is not so well know but now you will know it well, it is called, referenced_major_id, and it contains exactly that, the id of the routine which any routine is calling in its code.

Let's look at an example and the you will be able to understand what the script does. Lets pick a routine from the MSDB database, say 'sp_verify_proxy_identifiers'. System stored procedures has object_id in my database of '1318295756'. You can get the object_id by simply using this query

Look a the image below. 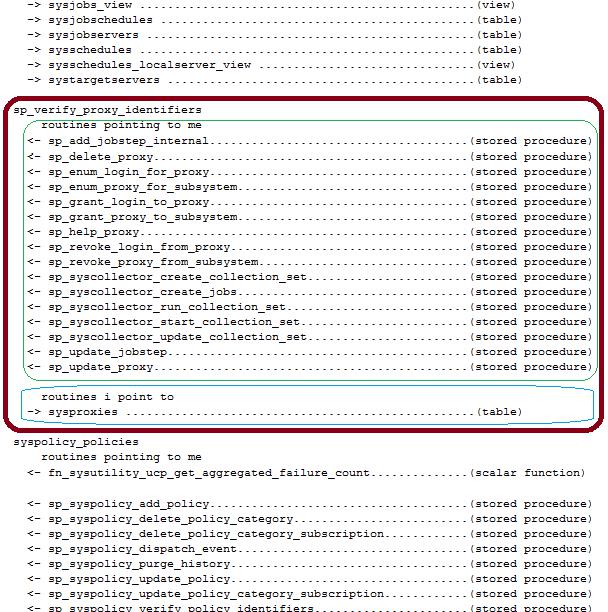 The script works exactly like that, but with the script we can't use where object_id = some hard coded number? This is because we want the script to run for all routines. In order to do this, the script links to sys.modules and sys.objects to grab other information for each routine and builds a cursor called all_objects, I should have called all just 'routines' but sometimes tables are involved as you saw in the example before, specially top level routines which only depend on tables.

With this explanation I am convinced you can follow the script which is commented at each section.

The script is also available for download in a file. But you can just copy it from below

I hope this articles helps you in your work, and also I hope it gives you more insight into your own code, and other programmers' code by helping you understand how it is structured and linked together.

This article looks at the T-SQL CAST function and how it is used and preferred to CONVERT().