Ever wanted to create you own server-side SQL Server trace without having to run internal system procedures to define the server-side trace and having to specify numbers for events and data columns? Well, SQL Trace Manager (a SQL Enterprise Manager extension snap-in)

server-side traces in Microsoft SQL Server.  In effect, after SQL Trace Manager is installed, a Trace Folder is added to each SQL Server in Enterprise Manager . The Trace folder includes a Running folder and a Finished folder (see Figure 1). 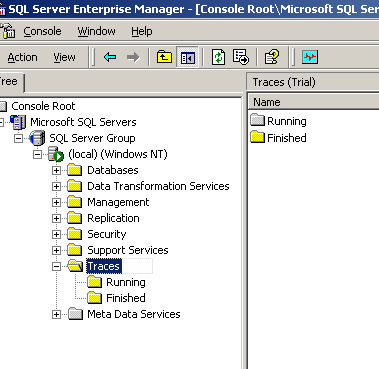 SQL Server 2000 is required as well as Enterprise Manager. The platforms specified that it will run on

To start a trace, you right click the Traces folder. You will have the option to "Drop Trace Database" or "Create a New Trace" (see Figure 3). 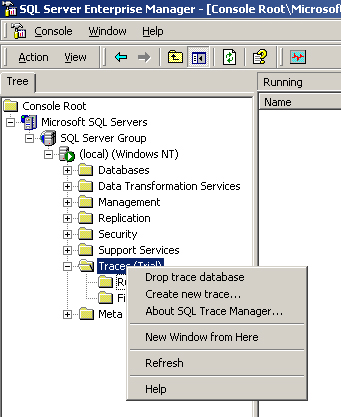 Under the General tab of the Trace Properties, you will be given the options to name the trace, provide a trace description, set the maximum file size, enable file rollover, enable trace stop time, do not start the trace, start immediately, schedule a start time, script the trace file (*.sql), load a template, or save as a template (see Figure 4). 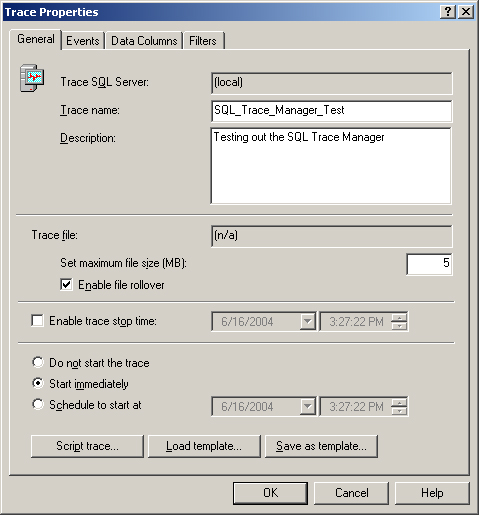 Under the Events tab of Trace Properties , you will have the option to choose an event (an action generated by SQL's server engine) and choose the event class (see Figure 5). 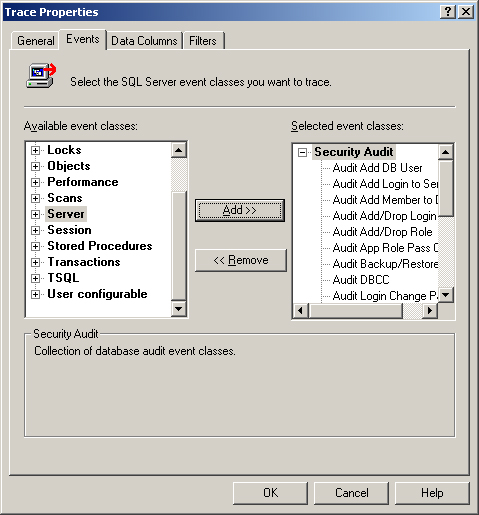 Under the Data Columns Tab of Trace Properties, you can select the data columns you want to capture (see Figure 6). 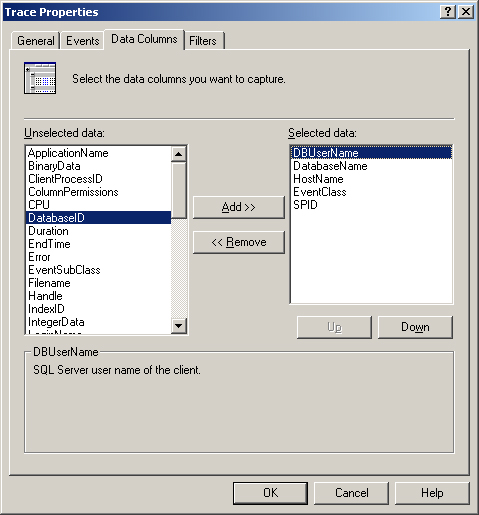 Under the Filters tab of Trace Properties, you can specify the criteria for the events begin captured (see Figure 7). 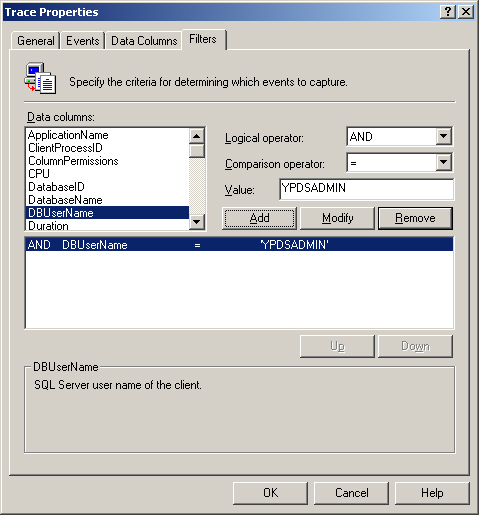 A trace may be in either paused or active (resumed) state. The trace state is indicated by the trace icon and a descriptive text in “Status” column.

The trace is active

The trace is paused

To start, resume, or stop a trace, click on the Start/Resume/Stop button while you are in the Running folder (see igure 9) or select one of these actions from the right-click popup menu.

Starting or pausing a trace, changes the trace status only. Stopping a trace moves it from “Running” folder to “Finished” folder. When you stop a non-native trace, you are prompted to store trace information (trace events, data columns and filters) in the trace database. If you choose not to save this information, you will not be able to work with trace results using SQL Trace Manager.

The trace result is stored in a file

The trace result is stored in a table

Support seems very limited. The Web site only allows you to provide a feedback form. The Help options with the "trial" version were very limited and many topics were left undone.

Server-side traces are much more efficient than using the client-side SQL Profiler tracing if you are implementing instense traces such as capturing all the event classes (over 100+) and data in those events. Server-side traces are written sequentially like the transaction log, and then, once the trace is stopped, can be converted to a table to be viewed in SQL Profiler. SQL Trace Manager makes this easy without the administrator having to know how to programmatically start a trace with the sp_trace internal procedure and using numbers to specify events and data columns. On the contrast, client-side traces writes the table as is it is happening, one row at a time. This allows the adminsitrator to actively monitor the trace. Unfortunately, because SQL Trace Manager is server-side, active monitoring is not an option.

I will rate each of the following using a scale from 1 to 5. 5 being the best

and 1 being the worst. Comments are in the last column.