The following review covers a function that is the bane of any DBA's life,

that being database synchronization.  This particular tool covers all

database DDL, there is another product for data synchronisation that will be

covered in a future review.

The test database I used in all cases has the

There is nothing technical in the installation, follow the prompts, pick a

folder and that is it.  De-installation was error free and complete.

lunch as I do with other products currently on the market.  The initial

screens are simple enough, asking you for two connection strings or if its the

same instance, then check a option and select the other database (no double

entering, its simple but this sort of thinking flows through the entire

application - a nice change!).   The user is presented with the

following screen after the compare: 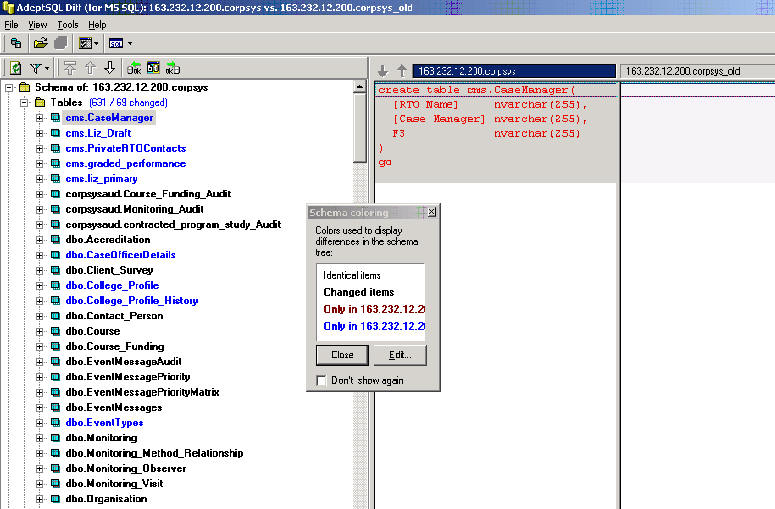 colour coding, but this is expected with any new software.  All items shown

what you are actually comparing.  I had no issues with the comparison, no

errors or warning or missing objects.

cant switch this around), this is little matter and presents a clean, susinct

view of the database.  We are shown a summary of the comparison:

The blue colouring indicates the object is on the primary, but not the

reverse of this.  Click the filter button and hide identical objects to

make life easier, especially in my case.  Note that the indexes list doesnt

show indexes partaking in constraints, namely primary key indexes. To get this,

drill through at the table level.  Double click to refresh the right hand

panel showing the differences, again all colour coded; the information is

presented instantly to the user.

There are a range of editor, compare and schema

options.  Some of the nicer options include:

b)  choice of including fill factors,

c)  retrieve all objects (any owner) or we

can filter on specific owners

d)  insert statements - can control how

statements are batched, and if column list is always specified

on changing any of these options the compare

Scripting is very simple and again lightning fast.  In your left panel,

primary server and visa versa for the right button).  The generation

of my entire secondary server sync script was under 2 seconds, very impressive.

The generated script is shown it a custom different sql script window,

that allows the user to step through, begin/end transactions, skip current

code with the transactions all built in.  As you would think, the script is

Be very careful in this window, it is easy to make mistakes and with no

explict transactions.  I was feeling game so I ran the script presented to

sync my secondary database.  Unfortunately, I had errors, the first being

foreign key references.  The script stops, and points you at the statement

that caused the error, I skipped over the error, carried on then hit others

the error being of course:

resulting in more issues later on, or simplying skipping items that I actually

want synchronised.  I was also presented with errors related to inserts

over identity columns.  Overall, I wasnt too impressed with the results of

my backup" to get back to square one..

A full sync didn't really work for me, so I opted for individual object

types, namely tables then views etc.  My first attempt was all tables, the

script generated very quickly, but on running the script I got foreign key

errors related to a table that is actually created later on in the script.

Again, this is not ideal and made life much harder.

Support is via email or via their website feedback form.

Due to its speed, I had early hopes for this product.  I have used a

raw performance.  What let this particular product down though was in the

running of synchronisation scripts.  The DBA is after a single script that

takes into consideration foreign keys, object dependencies etc, that can be run

as a single unit of work and be done with it.  From my tests to date, the

experience.  That said, the product has huge potential and would definitely

keep an eye on its progress in future versions.

website: http://www.adeptsql.com/. For a change there is no signing up, no logins or emails sent, its simple,

private and well worth a look.

From SSC Owners:  We usually send the review to the vendor to see

if there are any glaring errors before we publish. In this case we forwarded to

the author, Alex Reatov, and got back some great comments. With his permission,

we are including some of those comments here. Please also note that Alex

that includes both fixes and new features.

It would be better to skip this one: nobody (including myself) would tell you

exactly how this feature works and if it really does anything useful. You won't

see it in the new version, and it will take some very thorough thinking before

the feature would reappear in one of the future versions.

"(d) insert statements - can control how statements are batched, and if column

That was a bug rather than a feature: a leftover from a different product,

AdeptSQL Workshop, which could really produce the INSERTs.

The version being reviewed, Diff 1.09, didn't work with table data, so the

In the new 1.50 Beta this option page is being revived, as now it can really be

linked to the SQL generation code of the new DataDiff module.

3) Instant side-by-side comparison of SQL definitions is, I believe, one of the

strong points of AdeptSQL Diff, especially when you need to see differences in

lengthy stored procedures, triggers or views. It _is_ briefly mentioned in the

review, but unfortunately none of the screenshots clearly show this side-by-side

4) Drag-and-drop SQL generation doesn't add much to the functionality, but it is

neat, convenient and, AFAIK, unique among the competing tools.

Analyzer). The operation can produce one of 6 different scripts

(CREATE/DROP/ALTER, in either left-to-right or right-to-left direction),

depending on various Ctrl-Alt-Shift combinations.

5) Drilling down to constraints:

primary key indexes. To get this, drill through at the table level."

About this, I just want to ask a question. You can see that certain schema

elements, specifically indexes, triggers and xprops, are shown twice in the

tree: under the table (or other object) where they belong and again under the

"Summary collections" node. It is really easy to do the same thing with table

constraints. Do you think I should do this?

6) The Code Viewer and errors in scripts.

current version. The program is more suitable for tracking down individual

schema changes than for automatic generation of a complete synchro script. I

"Be very careful in this window, it is easy to make mistakes and with no explict

there). When you start a transaction, the editor also remembers the current

original location (so you can fix up the script and retry).

In v1.50, there is already an option to put an explicit transaction around any

This week Andy looks at where, when, and how jobs should be run and why you need to think about those items before you build the job. Part of this is deciding what runs on production servers and what doesn't.

How many jobs do you have? 10? 100? 1000? Andy makes the point that what works to manage for a small number of jobs doesn't work when that number doubles or triples (well, unless you only had 1 job to start with!). In part one of two, this article looks at ideas for using categories and naming conventions to get things under control.

If you've been with us for a while you know that Andy started a series last year on worst practices. As he says, maybe you can't always do best practices, but at least dont do the worst ones. Read the article and add a comment, participate!

In this follow up to one of our most popular articles, Andy responds to comments posted by readers and discusses how to manage SQL logins effectively in your applications.