When most of build transactional publications we think of articles as tables,

but articles can actually be other objects including stored procedures, the

focus of this article. To get started I've created a database with a single

table called Employees and two stored procedures, one to add an employee and the

other to increase the pay of all employees. In the screenshot below you can set

You can see that I've elected to publish both stored procedures as articles.

If we highlight a stored proc and click on the article properties button, we can

see that we have three choices for how the stored procedure gets replicated. I'm

going to leave it set at the default 'Stored Procedure Definition Only' for now. 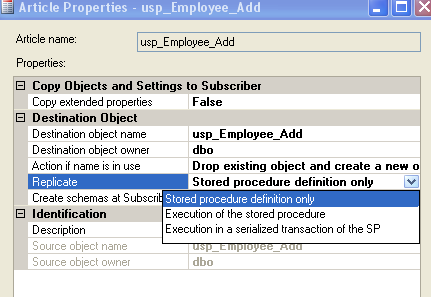 Once we add a subscriber and let the snapshot run, this is what we have on

Now let's do a couple quick tests. The first is to run the Add Employee proc

and see how the change is transmitted to the subscriber:

This shows that we're calling the replication generated procedure on the

subscriber. Our Add Employee proc will never get called by the publisher, but it

might be called by some process on the subscriber. Now let's see what happens if

we modify the proc on the publisher - I'll add a comment to it. The following

was executed on the subscriber automatically:

Changes to stored procedures are propagated to subscribers automatically if

you make them part of the publication. Remember, the stored procedure won't get

called as part of standard replication. It makes sense to replicate the

replication for updating subscribers (would need the same stored procedures that

would normally get executed on the publisher). 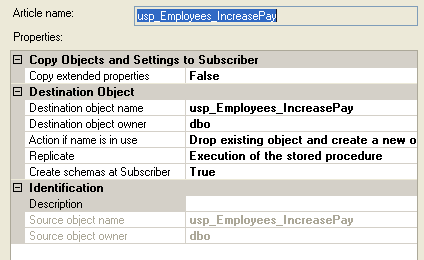 I'll execute the same IncreasePay proc on the publisher:

And then we see the same call executed on the subscriber:

This can be a huge performance advantage. I called a single proc that updated

proc call on the subscriber for each row changed, we just executed the same proc

on the subscriber(s). Given that the proc definition and data hasn't been manually

work on the subscriber of course; if the proc modifies a million rows there is a

certain amount of overhead that we pay regardless of how the update was issued.

serialized transaction, that is, one with the isolation level set to

SERIALIZABLE. Most of us don't use that high a setting often because it

typically has a negative impact on concurrency. If you need absolute perfection,

this is the way to go, because it eliminates the chance that the stored

that are occurring at the same time. But in practice do you really need this?

and in this case, it depends on you looking at how and when data access occurs,

and your tolerance for having data wind up slightly different. It's probably not

changes are just being executed on a reporting server. No, it's not good to have

incorrect data, but if something happens I definitely do still have the

original/correct data. Even if you do select the serialize option you will

that would normally be done.

As a follow up to that point, nothing says that you have to allow replication

of all stored procedures, or that they all have to be serialized or not. It's

procedure execution. It's just for you, will never get called by an application.

the proc to have the needed definition and then run it on the publisher,

probably at night or other lull. You get all the benefits of replicating

executed off peak. You can modify the proc again and again, changing it however

is needed, knowing that the right definition will be on each subscriber at the

you have a slow network connection, followed by when you are frequently updating

or deleting large numbers of rows, and the last would be when you just need to

fully applied on the subscriber. There can also be some reduction of load on the

distributor if the procs are updating large numbers of rows, but probably much

small number of rows with each call.

Replication can be confusing to many new SQL Server DBAs and some of the optmizations are not well described in Books Online. SQL Server replication expert and trainer Andy Warren brings us a technique for initializing replication without a snapshot.

Continuing with his look at transactional replication, Andy Warren looks at the various delivery options with a detailed analysis of what happens under various configurations.

Replication is one of the more useful features in SQL Server and can handle a wide variety of tasks based on his configuration. SQL Server expert Andy Warren takes a look at some of the default transational replication options in this article and what they mean.

There are some issues associated with managing identity columns with replication in your SQL Server database. As with previous releases of software, SQL Server 2005 requires that database administrators use special care when replicating tables with identity columns.