Re-oiling the gears for the data dictionary or catalog

Back in 2011 I wrote Oiling the gears for the data dictionary It describes a means of simplifying the addition of comments to SQL Server objects used by a number of database documentation tools.  These produce information that is up-to-date, consistently presented and in a consumable format.  These comments can provide the basis for a data dictionary or catalog.  Ultimately you still have to make the effort to supply meaningful descriptions for these tools to harvest.  However, there is a shortcut and I should like to share my approach with you.

Oiling the gears for the data dictionary took the simple approach to hiding the complexity of the extended properties stored procedures, sp_AddExtendedProperty and sp_UpdateExtendedProperty.

I also specified two "test" stored procedures that would highlight any tables or columns with blank descriptions.  However these result in too many failed tests when plugged into a legacy system.  You can only plug these into a build process once the number of fails are low enough for you to have a realistic chance of filling in the missing descriptions.

What is the problem I am trying to solve?

In addition, increased regulation makes the provision of a data dictionary or catalog an important weapon in the compliance arsenal.

Good quality documentation is something that everyone wants to be available but rarely is, furthermore few have the time or mindset necessary to produce and maintain such information.

It also allows you to maintain the MS_DESCRIPTION property on the various SQL Server database objects including the database itself.  Although the product makes it easier to supply the descriptions it does not generate default descriptions for you.

In my experience with a data dictionary or catalog is that you know where you want to get to but you wouldn't start from where you are today!

Can we auto-generate column descriptions?

The data warehouse I work on has tens of thousands of columns across the various tables and views.  When examining the structure of the database there are a number of common columns across a multitude of tables.  For example the majority of tables have some form of DateKey field that can be used with a DimDate dimension.

Even in the AdventureWorksDW2012, the small demo data warehouse database, we can see that DateKey crops up 14 times.

We can use SQL to apply simple rules to generate descriptions and wrap it up in a view.

The rules can be as simple or as complex as needed. You could have made the rule take account of whether the OrderDateKey was for an internet sale or an order passed on to a reseller.

The important piece is telling the reader that the column links back to the relevant dimension.

There are two problems with this approach:

Addressing the “too many views” problem

There are two parts to our view to provide DateKey descriptions:

We can represent this by adding a couple of tables to our MetaData schema as shown below. 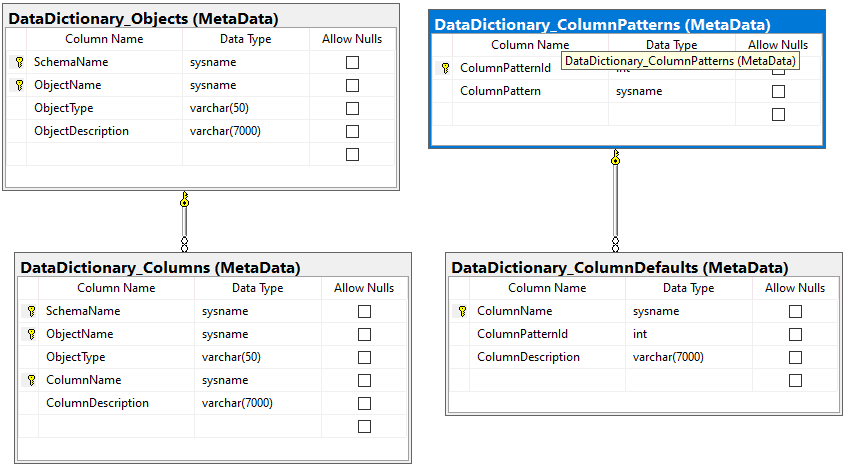 DataDictionary_ColumnPatterns will contain records similar to those below:

DataDictionary_ColumnDefaults will replicate the function of the CASE statement from our earlier query.

We can create a view to apply these column descriptions.

Now we have that view we can use it to update our MetaData.DataDictionary_Columns table.

What this has achieved is to turn our column description generator into a data driven mechanism.  This makes the addition of rule based descriptions to our data dictionary or catalog a data change rather than a code change.

We can take this a stage further. Our system tables tell us where we have primary and foreign keys therefore we can use these to generate default column descriptions as well.

Remember databases may be sparse on keys whether by design or by omission. This fact was the inspiration for Auto-suggesting foreign keys and data model archaeology.

Redgate SQLDoc emphasizes columns participating in a Primary/Foreign Key with an icon. These include descriptions in the image alt text that can be picked up by screen readers. For those of us whose eyesight isn’t what it was but don’t use a screen reader a simple description will suffice.

Assuming that there are foreign keys in the database then a simple description can be generated for single column foreign keys too.

The join criteria is particularly useful because it adds data lineage to a data dictionary or catalog.

We can concatenate the column descriptions from our two views to form an overall ColumnDescription:

Character fields with a small number of values

Where there is a small reference table or a dimension where a column contains a small number of values, I prefer to list those values in the column documentation. This it to help the reader by reducing the need to jump to other pages to get the desired information.

For us to know when we have a small number of values, we have to profile our data or have some foreknowledge of the columns for which this is true. Data profiling can be an intensive operation so we should consider the nature of the dimensions.

Due to the intensity of profiling I might build a table to enable me to flag those columns I wish to profile.

In a dimensional data mart, such as Adventureworks2012DW, you could run a query similar to the one below to begin to identify columns that might meet the criteria for having a small list of values.

You can set the IncludeForProfiling flag to zero for any column you know will contain more values than is useful for generating descriptions.

I want to record the profiling of the columns flagged in MetaData.ColumnProfileCandidates, so I create a table to do so.

Against every qualifying column I want to run a COUNT(DISTINCT {column name}) AS NumberOfValues. To do this I have to generate the SQL command and execute it. I can do this using the stored procedure shown below.

Generating the Column Descriptions for the data dictionary or catalog

As there are twelve months in the year I will generate descriptions for any character column that holds up to twelve values.

I want to apply descriptions to my MetaData.DataDictionary_Columns table where any existing ColumnDescription is a zero length string. I will need a staging table the same structure as my target table.

Into this table I want to substitute the schema, table and column names into the query below, execute that query and put the results in my staging table.

To do this we can use the same technique that we used to record the profiling information.

Once the stored procedure is created and executed, we can run an UPDATE statement similar to the one we ran earlier.

We can run the MetaData.ApplyDataDictionary stored procedure to attach our descriptions to the object extended properties.

Examining our results in Redgate SQLDoc

We can use Redgate SQLDoc to generate our documentation.  The two screen shots below give examples of what the generated column descriptions look like. 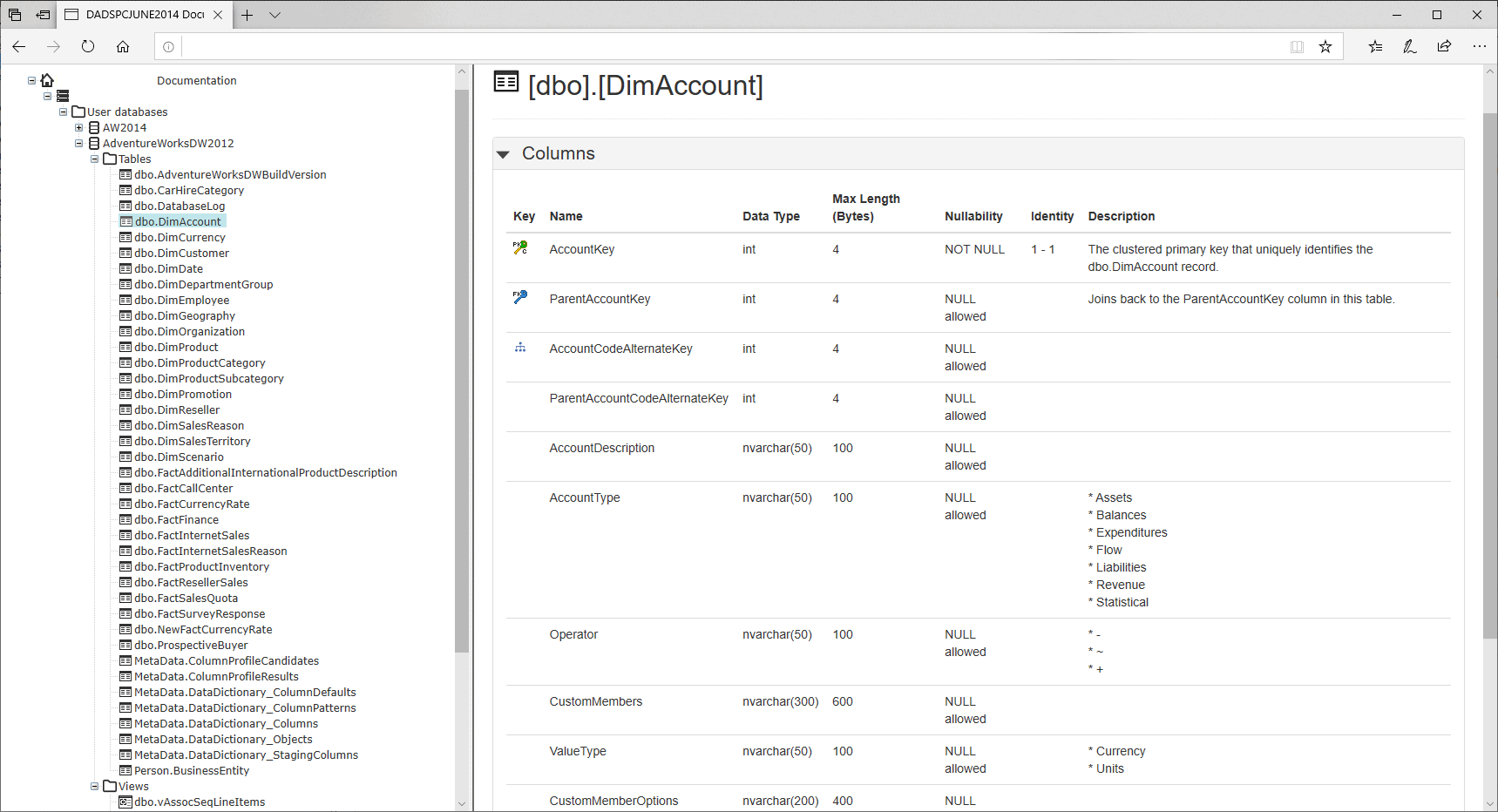 That is good enough for basic information and with the inclusion of the default column description can be a rich source of information.  What if we wanted to add the MS_DESCRIPTION property from the referenced table?  This would be simple enough to do although I would choose to have an additional TABLE_SUMMARY property. This would be explicitly to hold a brief description of what the referenced table allowed the analyst to do.  It would not constraint us in what we wanted to put in MS_DESCRIPTION.

Let us suppose that dbo.DimDate has a TABLE_SUMMARY property.  The value of that property is “The date dimension provides a mechanism to dice/slice and aggregate facts by various date parts thereby eliminating the majority of date calculations.”

We could harvest the TABLE_SUMMARY for the referenced table so that the description in the fact becomes a concatenation of three things:

Our view to retrieve foreign key descriptions would change to the following.

The combination of techniques discussed so far can provide rich information for our data dictionary or catalog with remarkably little effort. Think carefully about how we structure and phrase the table descriptions with reuse in mind.  Certainly, in a dimensional model it could reduce the amount of manual effort by more than half.

Potential objections to the auto-generation technique

The beauty of a relational database is that the implementation of Codd's rule 4 means that the object metadata is usefully descriptive of the objects within the database.  It is easy to generate a useful, human readable description of columns participating in a primary or foreign key relationship.

Arguments against are likely to be that for the operational database:

Fortunately, users of Redgate tools have mechanisms for addressing these. 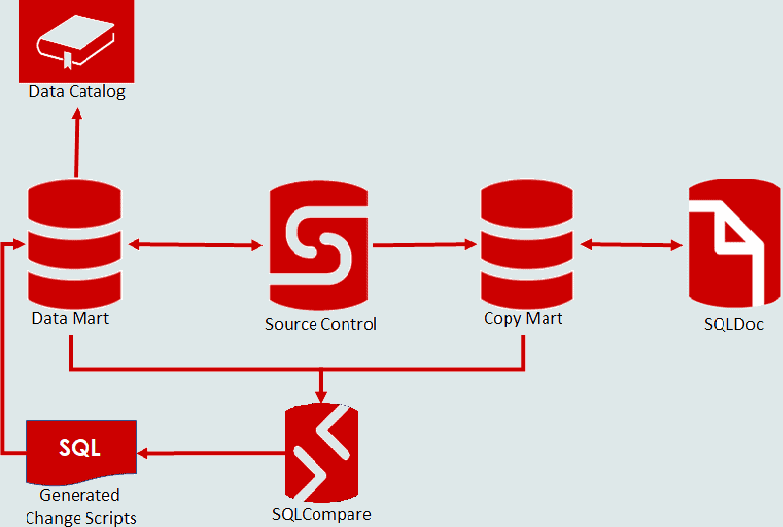 The approach you could take is illustrated in the diagram above.

My experience when it comes to documenting a database is that the size of the effort is always a barrier to doing it.  Consequently opposition to providing documentation is always quite vocal. From a documentation perspective you can gain substantial coverage of the database using the techniques described above. Hopefully this will reduce the decibels emitted by the naysayers.

Devising rules for retrieving column information and generating descriptions is an art.  Certainly writing reusable table descriptions that can be concatenated with generated foreign keys descriptions is too.  The goal is to gain a critical mass of documentation where adding further documentation becomes a matter of adopting development practises.

The payback is a source of information about our databases that is educational and information.  An ideal start for a data dictionary or catalog.

This article covers SQL Server 2008 Service Broker, an asynchronous messaging framework that is directly integrated within the relational engine of SQL Server. The series will provides you with the basics about implementing Service Broker applications and how you can transparently scale them out to support any required workload.

This article shows different options to use the rounding functions in SQL Server.