In the previous part of this series, we talked about the importance of spatial data in our everyday lives. We talked about vector and raster data, and we explained that the current version of SQL Server 2008 focuses on two-dimensional vector data. Next, we introduced the new geography and geometry data types in SQL server 2008, and we took a quick detour into some important object-oriented principles.

In this article, we start out by taking a look at the class hierarchies for both the geometry and the geography data types in SQL Server 2008. We will focus on the concrete classes in the class diagram which are:

We will also take a look at the collection classes in the object hierarchy, which allow us to store multiple instances of each type.

Once we have a good grasp on the geometry and geography class hierarchy we will dive into the details of each concrete class. We will start our investigation by looking into the details of the Point and LineString class, and we will write a T-SQL script that highlights the most important features. In the process we will take a look at the three different data formats that can be used to represent spatial data:

All of these formats are published as a standard by the Open Geospatial Consortium (OGC), which is the leading standards body for geospatial and location based services. 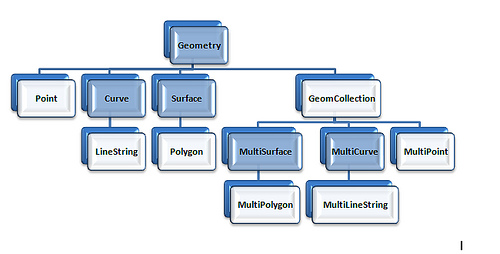 Each of these single-instance classes has a collection equivalent that can contain multiple instances:

All of the classes in the geometry and the geography class hierarchy can be represented by three different formats:

All of the above formats are published as standards by the OGC. In the code samples that follow, we will be showing multiple examples of each format.

A Point is a zero-dimensional object which represents a single, exact location. It always contains an X and Y coordinate, and can optionally can contain a Z (elevation) value, and a M (measure) value. The measure value is an arbitrary floating point measurement value that you can associate with the Point instance.

The sample T-SQL script (GeometryPoint.sql)illustrates some of the capabilities of the Point class. Throughout all of our demos, we will be working with a very simple table called GeometryDemo, which allows us to associate a Geometry instance with an integer ID:

In the following code sample, we insert a Point instance, and then perform a select to retrieve the point instance in a number of formats:

In the first code snippet, we use the WKT format to insert a Point with an X coordinate of 50 and a Y coordinate of 65. The WKT format for a Point simply requires you to to specify the X and Y coordinates. Note that you should NOT use a comma separator between the two, which might seem counterintuitive at first.

In the second snippet we select the instance that we just inserted. Since Value is a geometry class instance, we need to use the dot (".") notation to access properties and invoke methods on the object:

One important note: although TSQL by itself is not case sensitive, the CLR methods and properties on the spatial data types are, so make sure that you spell the property and method names correctly! For example if you would spell "Value.STAsText()" as "Value.STasText()" you would get the following error message:

The output of the select query is shown below:

From the above output, we see that the WKT representation for the Point is returned by both the ToString() and the STAsText() methods. We also see the binary WKB representation and the X and Y coordinates of the Point instance.

Using the Z and M coordinates

As we mentioned earlier, a Point can optionally contain a Z (Elevation) coordinate and a M (Measurement) value. Note that both the Z and M values should be floats. Below is a T-SQL example:

As you can see, we simply added the Z and M values in the WKT format. The output of the select query is shown below:

In the documentation you will notice that the OGC standard methods and the Microsoft extensions are cleanly separated: 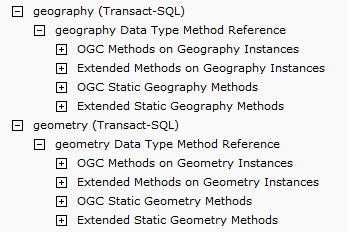 In the above diagram we also see sections for static methods (both OGC and Microsoft extensions). We will take a look at static methods in a later section of this post.

The only format that we have not worked with so far is the Geographic Markup Language (GML), let's write a query to retrieve both points as GML:

The AsGml() method can be used to retrieve a geometry instance in GML format.
The output of the query is shown below:

The standard XML namespace for GML will have the URN: http://www.opengis.net/gml.

There is also one important note that we can make from the above output: the Z and M coordinates that we used for the second point are NOT returned in the GML! That is because they are proprietary Microsoft extensions to the OGC standard.

The methods and properties we have used so far were invoked on an instance of the Point class, so we used the "dot" (.) notation:

Following is a discussion of each static method:

The output of the select statement is shown below:

As we can conclude from the above output, the Point instances were were created as expected by means of the static methods.

In the previous code sample, you might have noticed the "0" after the @xmlSnippet parameter:

This argument is the SRID, or the Spatial Reference Identifier. The SRID corresponds to a spatial reference system based upon the specific ellipsoid used for either flat-earth or round-earth mapping. Different projection systems exist, some of you might be familiar with the Mercator Projection that was used to create the maps that were in most classrooms in recent times. A good discussion of map projections can be found at: http://maps.unomaha.edu/Peterson/gis/notes/MapProjCoord.html.

Each projection is uniquely defined by its own SRID. You can use any projection you want, but you need to be aware that when you are comparing spatial instances using any of the methods (such as STIntersection()) you need to make sure that all objects have the same SRID otherwise you will get a run-time error!

That concludes part 2 of this series. In part three, we take a look at the LineString and the Polygon class, and we will use some visualization tools such as GeoQuery, Spatial Viewer, and SQL Server Management Studio's very own "Spatial Tab" to get a visual representation of our spatial data!

Which is the correct spatial data type?

The institution I work with has decided to migrate their database system to SQL Server 2008. One of the applications uses geospatial data, which consists of millions of rows. I understand that their are indexes that can be used for geospatial data, but have not worked with them. What's the scoop on them?