This article is the fifth in a series. There are links at the bottom of the article to the other parts.

In the last article we examined the Filestream data type. This time we look at SQL Server 2008 spatial data types, which provide a comprehensive, high-performance, and extensible data storage solution for spatial data, and enable organizations of any scale to integrate geospatial features into their applications and services.

Background– Why it all needed

As the technology advancing, the development of location-aware application is becoming popular and these applications are almost being used by all of us these days. For example, a customer wants to know details about a hospital/restaurant in a near vicinity of his address, the distance between given two places, events happening in the nearby area or you want to do a visual analysis on location data etc. This integration of geospatial information into applications becomes more prevalent, application developers will increasingly require database systems that can store and manipulate spatial data.

With the introduction of the geography and geometry data types, SQL Server 2008 provides a comprehensive, high-performance, and extensible data storage solution for spatial data, and enables organizations of any scale to integrate geospatial features into their applications and services.

SQL Server 2008 provides support for geographical data through the inclusion of new spatial data types, which you can use to store and manipulate location-based information. These native data types come in the form of two new data types: GEOGRAPHY and GEOMETRY. These two new data types support the two primary areas of spatial model/data: geodetic model and planar model. Geodetic model/data is sometimes called round earth because it assumes a roughly spherical model of the world using industry standard ellipsoid such as WGS84, the projection used by Global Position System (GPS) applications. 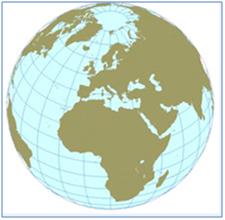 Planar model assumes a flat projection and is therefore sometimes called flat earth. Data is stored as points, lines, and polygons on a flat surface as shown in the image below. 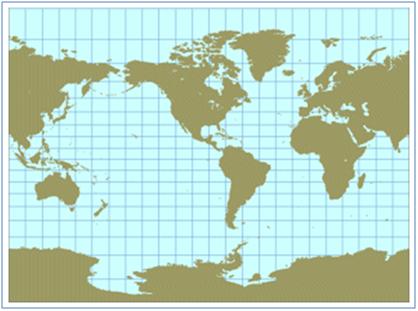 SQL Server 2008 provides the geography data type for geodetic spatial data, and the geometry data type for planar spatial data. Both are implemented as SQLCLR UDT, and can be used to store different kinds of geographical elements such as points, lines, and polygons. Both data types provide properties and methods that we can use to perform spatial operations such as calculating distances between locations and finding geographical features that intersect one another (such as a river that flows through a town.)

By storing spatial data in relational tables, SQL Server 2008 makes it possible to combine spatial data with any other kind of business data; this removes the need to maintain a separate, dedicated spatial data store and enables high performance queries that do not need to combine data from multiple external sources.

In this example first we will create a table to store spatial data into a column of GEOMETRY data type and insert some records, for example to hold point, linestrings, polygon.

Now we select the inserted records using SELECT statement. Here you will notice a cool new tab “Spatial Results” appears to show spatial data graphically, you can select to show the graph with grid as well as you can zoom-in and zoom-out.

As I discussed before spatial data types have been implemented as SQLCLR UDT, and hence it utilizes the capabilities of object oriented programming. What I mean here is, like any object oriented programming language, it has static methods as well instance methods to work with it. For example, STGeomFromText is a static method which is used to return a geography instance from an Open Geospatial Consortium (OGC) Well-Known Text (WKT) representation augmented with any Z (elevation) and M (measure) values carried by the instance whereas <instance>.STbuffer is an instance method used to return a geography object that represents the union of all points whose distance from a geography instance is less than or equal to a specified value. Apart from these two methods there are couple of more static and instance methods whose details you can find in BOL or MSDN.

You might me wondering what the second parameter is being passed to static method as zero. It is a Spatial Reference Identifier (SRID). The SRID corresponds to a spatial reference system (defines the unit of measure and the dimensions of the world being represented) based on the specific ellipsoid used for either flat-earth mapping or round-earth mapping. A spatial column can contain objects with different SRIDs. However, only spatial instances with the same SRID can be used when performing operations with SQL Server spatial data methods on your data. More details on SRID can be found here.

One interesting thing to note here is, the new GEOMETRY and GEOGRAPHY data types have been introduced to SQL Server 2008 via a SQLCLR UDT (SQL Common Language Runtime User Defined Type), or in other words, these data type have been coded as a C# class using the .NET Framework though it behaves and works in similar way as any other system defined type, you don’t need to install it separately or set the CLR Enabled configuration to TRUE before using it.

This article is the fourth in a series. The other articles in the series are:

With SQL Server 2008, you will have new built-in support for location based data types and supporting geospatial features. Next you will learn how these new data types work.