Background and the SQL 2000 Methodology

has become any easier for SQL 2005. Use for DR is mentioned in detail in the SQL

in this series of articles including log shipping, replication with updateable subscribers, and now database

mirroring, which all have their pros and cons and I won't try to do

a long comparison of all these techniques here. Let’s just assume that you have come

to the conclusion that transactional replication is the most appropriate DR

solution for your needs and want to implement it as painlessly as possible.

As mentioned in the link above, for SQL Server 2000 there exists a pretty

thorough set of recommendations and manual processes to implement. You might

wonder why it is not so straightforward to set up. Basically, the problem is

read-only. The constraints that exist to limit the data on the subscriber are

dropped and automatically populated columns – those having defaults, identities

or timestamps - are not implemented, because quite logically

they would be never be needed for a read-only implementation. This is fine for

failover server it simply won’t cut it. We need the schemas to be more or less

having any identity columns, check constraints, defaults or timestamps!).

schemas possible. It is largely a manual process and involves setting all

constraints and identities to NOT FOR REPLICATION (NFR) on the publisher, then

manually scripting out the publisher’s tables. Certain changes are made to the

script, including modifications of timestamp columns. After that we apply the

script on the subscriber. This can be done manually or as a pre-snapshot script

but either way it must bypass the normal, initialization-generated tables.

In the publication, the article properties for all  tables are set to not

overwrite the existing tables created in the script above. After that

subscriber that apply to any timestamp

So, if all this seems really longwinded, it really is :), and it is therefore

What I was interested in was how have things improved for

SQL Server 2005 when using transactional replication for a failover solution.

Does the above document still hold. If not, are people still using an old

methodology when things could now be done more simply?

If we replicate a set of tables containing the usual PKs,

FKs, defaults, check constraints, indexes etc what is taken and what is left

the check constraints and FKs.

However there are 2 interesting changes, the first of which is crucial:

So, the schemas of the publisher and subscriber are already converging, without

any manual changes having yet being made. How can we force the schemas to converge

further without resorting to editing scripts? The remaining configuration is set

on the article properties dialog box (below).

properties collectively for a set of tables rather than one by one in SQL 2000.

The actual properties themselves are shown below: 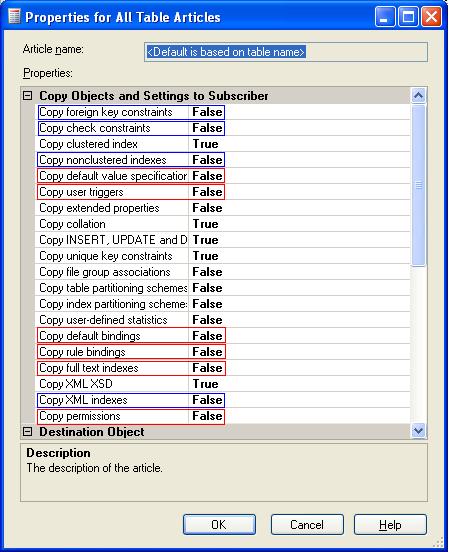 The properties in red have defaults values which need

changing for our purposes and are the "crucial" ones, while the ones in blue are

potentially less critical depending on your requirements. The simplest method is

to set them all to true. After setting these properties appropriately by reversing the

ones in red and blue I use

SQLCompare and find that apart from some inconsequential changes (eg the

timestamps is automatically taken care of.

The default of “Convert timestamp to binary” is set to

false. At first I thought that some fundamental change had occurred and

timestamps were now allowed to be assigned directly on the subscriber. Looking

replicated at all. Obviously this leads to non-convergence of data and if later

on you are using

DataCompare or some equivalent tool you must be aware that this

column will need omitting to have a useful comparison of data.

So, by setting the properties of the table articles

solution without resorting to manual table scripting and stored procedure

modifications. This is good news - it can all now be implemented much more

simply than with SQL 2000 and is therefore less prone to errors.

Along with some best practices, SQL Server MVP Hilary Cotter shares a log shipping setup process from start to finish.

A Look at Database Mirroring

One of the more interesting new technologies in SQL Server 2005 is database mirroring, allowing you to implement high availability on a database with commodity hardware. Jay Dave brings us a nice description of this technology.

One very interesting new feature in SQL Server 2005 is the ability to run backups to multiple locations, ensuring you have a second copy of the backup file if your first one were to be corrupted. SQL Server expert Andy Warren takes a look at how this feature works and the implications of using it.

In this presentation, Brian shows you how you can use database snapshots for data protection. He shows you how to create a snapshot, read from it and lastly how to do a database recovery from the snapshot.