Hadoop many flavors of SQL

Assume you have already made a decision to learn more about “Big Data”, and its common implementation on Hadoop ecosystem. You certainly may wonder how much of your SQL Server experience is relevant. The SQL language comes to mind initially because it is universal in the relational database world. So, setting aside the gory details of systems internals, how different are SQL implementations on Hadoop from Microsoft T-SQL?

This article explores the most popular SQL layers inside Hadoop ecosystem, their appropriate usage scenarios and highlights the most striking differences between Microsoft T-SQL and the SQL implementations that those layers employ.

It appears that a new “SQL over Hadoop” project is being released every month. So, which of the projects are in a high demand? Judging by the advertised “Data Engineer” job postings that reflect current demand in the high tech job market, Hive, ImpalaSQL, SparkSQL and Presto are the most popular among employers.

From the high level `SQL over Hadoop` implementations can be easily presented as stacks of technologies.

From Fig.1 you can see that each stack consists of  an “SQL layer” on the top, a “Compute Engine” in the middle and an HDFS file system at the bottom. Here, each “Compute Engine” does heavy lifting behind the scenes by translating SQL commands into the language that is relevant to the engine programming. At the bottom, there is a common to each stack HDFS file system that stores our data in the form of the files.

Fig. 1 The Hadoop ecosystem and its popular SQL engines.

However, the licensing cost of SQL Server and the deep learning curve of learning MDX (the query language for OLAP databases) present a significant challenge.

While working with large volumes of data, the activities can be broadly categorized as

Some features of all “SQL on Hadoop” implementations, familiar to SQL developers, are:

Hive is the original and the most common SQL implementation layer over Hadoop ecosystem. Hive defines a language called HiveQL, loosely modeled after MySQL flavor of SQL. HiveQL translates SQL-like queries into MapReduce jobs (a framework for processing and generating large data sets with a parallel, distributed algorithm on a cluster).

The intermediate results of MapReduce computations are stored on the disk, which makes HiveQL queries slower, but at the same time, resilient to failures. Since Hive is built on a MapReduce platform where everything is done in a bulk mode, it is good for the batch ETL processing but does not offer real-time queries.

Both engines are designed for “interactive queries” (when you want to wait for your query result to come back before taking break) but not for long-running ETL processes.

It is important to note that, running these processes in memory brings its own challenges. For example, only smaller datasets can be handled (hundreds of GB vs. terabytes with Hive).

The benchmark testing of Impala 2.0 with alternatives, including Presto, shows that Impala outperformed Presto in both single-user and multi-user loads (see Fig 2). The testing was performed by Impala engineers. [1]

Up until now it appeared that Presto was lagging significantly behind Impala in terms of the speed, references in the press and also documentation.

However, as Teradata threw its weight behind the Presto SQL engine, we may see a catch-up game between Presto and Impala and very soon. 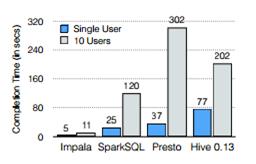 Apache Spark SQL uses a Spark computing engine and runs on a top of the Hadoop file system HDFS.

Spark data processing engine, built by UC Berkeley, is being heavily promoted by Databricks, its commercial parent company. Currently, Spark is the most talked-about SQL implementation.

Here are a few reasons for Spark being so popular:

Although the Spark engine runs in memory, it also saves intermediate results on a disk (“cache”).  This cache is usable for future queries as well, making the queries to return results faster.

However, as Spark”s proponents explain [3], Spark SQL really shines in the area of predictive analytics (also known as machine learning - the process of repetitively running various statistical models on large sets of data).

Loved by “Data Scientists” (who often have a background in statistics) the Spark engine allows the use of familiar languages, such as R, Panda and Scala, and seamlessly incorporates SQL statements.

As noted above, the Spark engine supports a great number of data sources. That flexibility provides for the next great use case – ETL.

However, and unfortunately for SQL Server developers, Spark ETL scripts cannot be written entirely in SQL. Instead they must be written in Scala, Java or Python languages with incorporated SparkSQL snippets.

This article attempted to compare the most interesting SQL language features for the most popular “SQL on Hadoop” implementations.The SQL implantations were selected based on their popularity in currently posted “Data Engineer” advertisements.

In my view, T-SQL certainly remains a much richer language. Moreover, as T-SQL can be used for almost any task within SQL Server; there are cautionary notes to consider for each `SQL on Hadoop` implementation.

[2] Presto: Interacting with petabytes of data at Facebook , November 2013

Learn where to get the latest installation and learning resources for the ever-evolving components of Hadoop ecosystem and how those components may complement Microsoft SQL Server common everyday tasks.

One of the core components of the Hadoop framework and responsible for the storage aspect is HDFS. Unlike the usual storage available on our computers, HDFS is a Distributed File System and parts of a single large file can be stored on different nodes across the cluster. Here are some of the key concepts related to HDFS.

The big data revolution seems to have failed to materialise, and for good reason - it's really difficult.

Preparing Your Enterprise for Big Data

Big data applications are now fairly commonplace in large organizations. It is, however, difficult to simply ‘drop’ these applications into an existing IT infrastructure and expect to run smoothly. In addition to energy and cooling requirements for new hardware to support the new big data application, other IT areas need to prepare.