Getting the Most out of SQL Server 2000's Query Analyzer, Part I

The first time I started up Query Analyzer after upgrading my

client tools from SQL Server 7 to 2000, I noticed the Object Browser

immediately.  Playing around a bit, I tinkered with the Transact SQL

debugger and generally just explored some of the new functionality.  Most

of it was quite useful, but not exactly straight-forward.  When I began

looking into getting more out of some of these new features, I found the documentation on Query Analyzer

was  intermingled with the rest of

Books Online and I thought then how it could easily be overlooked.  About a

month ago, I was talking with a developer about some issues he was having

debugging code, looking at execution plans, and trying to determine the best

places to put indexes. I started asking him some questions about how the

queries.  They weren't using any of the main features, and the reason was

because they weren't aware of how to use them.

This series will hopefully be a

helpful "How To" guide to maximizing the use of Query Analyzer.

There are quite a few great database tools out there other than Query Analyzer,

but the main advantage of Query Analyzer is it comes with SQL Server, installs

by default as part of the client set, and is very powerful in its own

The key is to understand what Query Analyzer can do for us, the

kind of information it can provide us, and its limitations.   This

Windows 2000.  We'll also take a quick look at a problem with linked

servers, Query Analyzer (or any client, for that matter), and Windows

those who've been using Query Analyzer, most of the information in this article

will be old hat but hopefully there will be some new information for everyone. We'll start from the very beginning, to ensure we leave no

gaps. Query Analyzer has a lot of functionality, and some of it can

get pretty in depth.   As with most good tools, it takes a little bit

order to put the tool to maximum effect.  So without further ado, let's

There are several ways to start Query Analyzer. The first is

from the Programs sub-menu: 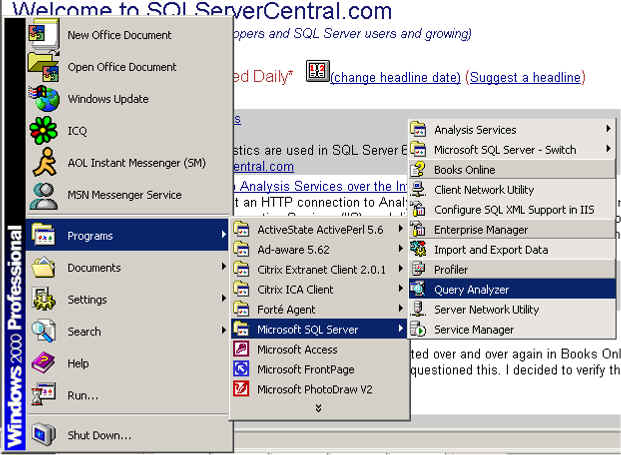 The second is from the Tools menu of Enterprise Manager: 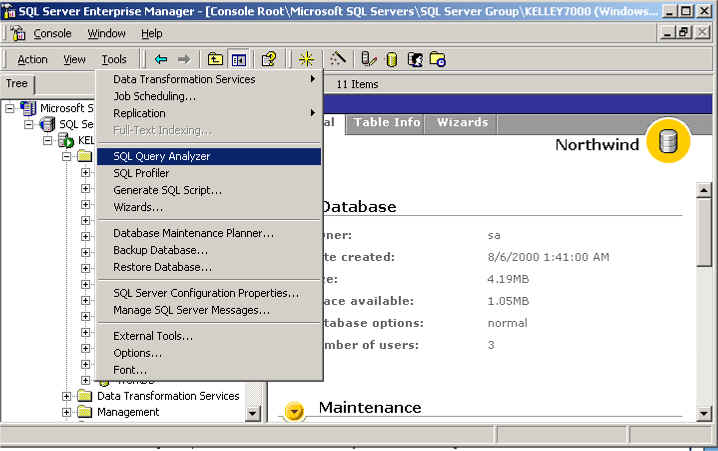 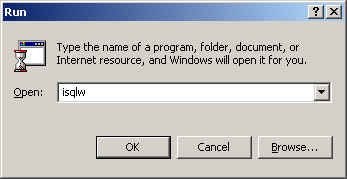 bit when we talk about the RunAs command.

Connecting to a Server

Upon entering Query Analyzer, we're prompted to connect to a

server.  The connection dialog box is the same we'll see in other SQL

Server tools such as Profiler.  With it we can choose the server to connect

to, as well as the connection method: 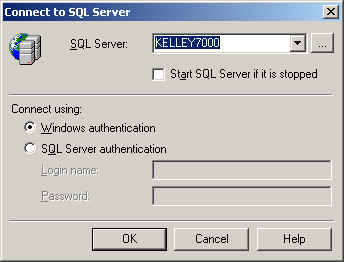 One area that I've seen issues with is understanding the two

different authentication methods.  I have seen developers take their NT

Server authentication.  This usually occurs when the developer is logged

particular SQL Server, which means SQL Server must be running in mixed

Under Windows NT 4.0, there aren't too many

options.  Windows authentication is going to match  the user account

logged into the workstation.  With Windows 2000, however, there is the

RunAs command.  The general syntax is:

An example of its use to bring up Query Analyzer is:

This will allow us to use Windows authentication with Query

Digressing a little, this is a good practice for privileged

accounts.  Best practices state that we shouldn't do day-to-day activities

compromise.  From a risk perspective, if a non-privileged account is

compromised, the potential damage is far less than if a privileged account is

compromised.  By utilizing the RunAs command, we can carry out our daily tasks

appropriate privileges, we can use it only in the specific context of certain

applications.  For other SQL Server utilities, given default paths, here

are the runas commands:

As can be seen, the RunAs command is very helpful from a

security perspective.  Running in a non-privileged account with the ability

the su command (superuser).  It's

nice to see this security measure has come around to the Windows world.

involves querying against linked servers.  The root of the issue involves

Windows authentication and the concept of the "double hop," which is

prohibited by Windows authentication under NT non-Kerberos environments (such as

Most of the time when we're using Query Analyzer, we're sitting at a

However, we may be running QA from our workstation, and

Server, and the SQL Server uses SQL Server authentication to get to the linked

server, we can get at our data without issue.  SQL Server is able to make

when we created the linked server.

However, when we connect to a SQL Server using Windows authentication (specifically

NTLM, the method of authentication for NT 4.0) and that SQL Server then attempts

to use Windows authentication to the linked server, we'll get one of the

The problem is with NTLM.  SQL Server is having to take the

the same Windows authentication to the second server.  If we think of going

from one computer to another as a hop, we have to traverse two hops to get from

client system to the linked server. NTLM does not support such a "double

hop" and as a result, when the second hop is attempted, SQL Server must try

and make an anonymous connection, since it has no other credentials which to

As a result, we fail and receive the error message above.  This problem

is not limited to SQL Server, as it can occur in FrontPage 2000 under similar

conditions when trying to work with security. Kerberos does not have such a

Kerberos will not have the same issue.  Windows authentication can then

traverse the double hop.  If that's not our setup, however, the only

workaround is to make the second connection via SQL Server authentication.

This gets around the double hop issue, though admittedly it means the second

SQL Server has to run in Mixed Mode.  Now, one thing to remember is if

occurs when we have to go from one computer to another, and then finally to a

second.  Also, if we have jobs on a particular server that need to access a

linked server, those jobs can work with a link via Windows authentication, since

we're still only talking about a single hop.

authenticating on SQL Server.  We looked at several ways to execute Query

duties with the level of permissions we need.  We also took a  quick

loop at authentication and the problems we encounter with the double hop.

Transact-SQL Debugger.  The Object Browser is the most visible new feature

of Query Analyzer, so we'll take the time to look at it in some detail.

leverage it for future development efforts.  A good understanding of these

Logins, Users, and Roles - Getting Started

Do you know the difference between a login and a user? What's the best way to add them; Enterprise Manager, T-SQL, or SQL-DMO? In this beginner level article Andy demonstrates how to use all three methods to add logins and users and offers his view of which is the best technique.

Check constraints can be added to a table to enforce specific rules on one or more columns. This article shows you how to use them to enforce simple and more complex rules.

This article briefly discusses SQL Server's data and procedure cache and shows you the common Transact-SQL statements/command and system tables that you can use to interact with the cache through Transact-SQL.

Getting the Most Out of SQL Server 2000's Query Analyzer, Part II

Brian Kelley continues his series on getting the most out of SQL Server 2000's Query Analyzer. In this article he looks at the Object Browser and the Transact-SQL Debugger, new features in the 2000 Edition which can reduce development and troubleshooting time for DBAs and database developers.

SQL Server DBAs are often curious about the inner-workings of SQL Server. Indeed, it can save your job during disasters to know what's going on inside SQL Server. This article shows you how to use some of the SQL Server internal views to view some meta data about your servers.