Many of you have learnt to beat SQL Server into generating test data for you to fill the tables you need when checking the functionality and performance of your solutions, or you make do with the sample databases available, such as Northwind or AdventureWorks. In this article we'll use SQL Server Integration Services to perform the following tasks:

As we'll see, SSIS is very well suited for this work, and hopefully this construct will be useful as a template and starting point for your own tests. Since the focus is on generating the test data, the actual benchmarking will be a simple but hopefully still useful test on the data flow (a.k.a pipeline) components used.

If you are already savvy with the basics of creating packages, connection managers etc, I suggest you skip down to Creating tables and indexes.

We'll create two packages: Initialize.dtsx and Cleanup.dtsx. You would typically also create at least one more package, say Benchmark.dtsx. For this article though, we'll do our benchmarking by looking at the record insertions inside Initialize.dtsx.

To get started, we'll create a new SSIS solution for our project. In a later article, we'll add more projects to this solution that will consume the test data. I've called mine Create_Test_Data as shown below. 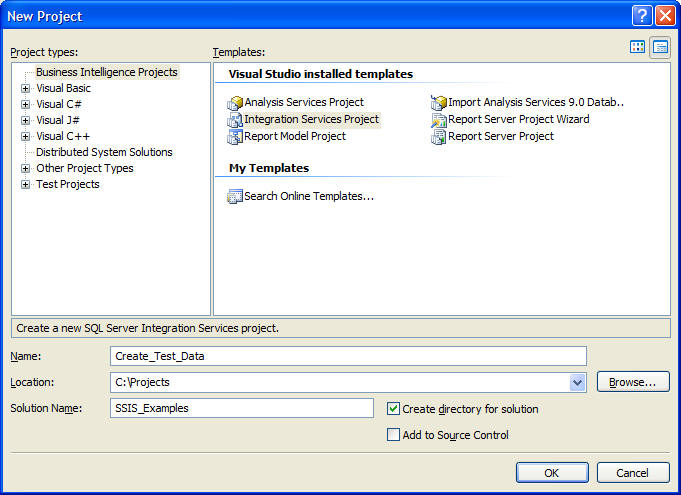 To centralize the database connection information, we'll first create a Data Source that points to our database; I've decided to use an OLE DB connection to the tempdb on my local host. 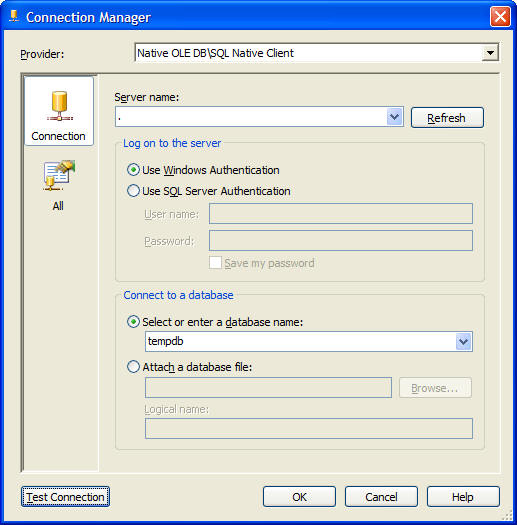 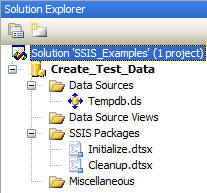 Add two Execute SQL Task components and one Data Flow Task from the toolbox, and connect them as shown below. I've changed the names of my tasks to reflect their function. 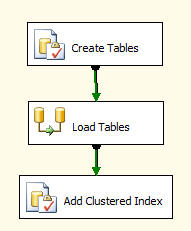 For our tests we want two tables; we'll create a large reference table called PERMANENT with many records, and a typically smaller table called INCREMENT, by adding this code to the Create Tables task, and setting the Connection property to the Tempdb Connection Manager:

Load Tables inserts the test data and we'll cover that below, while Add Clustered Index does what it says on the tin:

While we're at it, let's drop an Execute SQL Task onto our Cleanup.dtsx package, add the code below to the SQLStatement property, and create a new Connection Manager from our tempdb Data Source, all within the task edit panes:

Now we can setup and later tear down our test environment with only two mouse clicks!

Variables Are Good For Your Health!

Back to Initialize.dtsx, let's add some to control the package; it will give us several options for manipulating the settings, including using the GUI in Visual Studio as well as using parameters when running it from the command line with the dtexec.exe utility (shown below):

Let's add variables that do the following:

The last two variables controls the distribution of the keys we'll generate, we'll use that in a later article when measuring the performance of lookups. Here though, it will make generating the test data a bit more interesting.

Load Tables is a data flow (a.k.a. pipeline) task that can do in-memory processing of records very quickly. We've added one script source component below and two OLE DB Destination components. 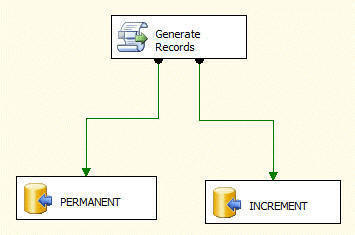 We'll use a single script component to generate records for both our tables, but it has other uses too; it can be:

By default, a script source component comes pre-configured with one output called "Output 0". We'll rename that output to "OuputPermanent" and add a second output called "OutputIncrement". To both outputs, we add 4 columns, corresponding in name and type to the fields we want our generated records to have. 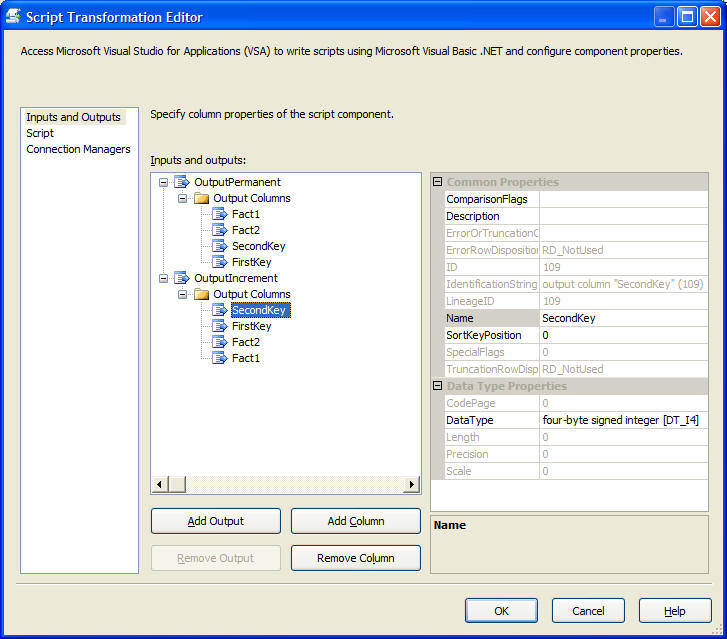 Next, specify our Connection Manager:

On the Script pane, specify all variables that our script will use. This makes them available in our script as strongly typed objects, complete with Intellisense!

Hit "Design Script..." to enter the VBA environment, and add this code to the CreateNewOutputRows() function:

There's a few things to note about the script:

Hit F5 to run the package, and then look at the beginning and end of the two tables:

As we can see, the range of numbers look OK, as do the fact that we have some duplicate records in the INCREMENT table.

Let's measure the speed of inserting records into our two tables, using various settings. Even though you can pretty much guess the outcome beforehand, it might come in handy as a template for doing further tests. Setup:

Before we start, minimize overhead inside the Load Tables task by setting the PreCompile property of the Generate Records script to true, otherwise the script will have to be compiled every time it runs. You then need to enter and exit "Design Script..." once to have the script actually be compiled.

Since there's only a few runs to make, we'll make the appropriate settings and fire them off manually by hitting F5. Timings we'll get by checking the "Progress" tab after each run, and noting the "Elapsed time" for the "Task Load Tables" section, and we'll run each test multiple times to check that we get consistent results. In later articles we'll be more stringent about running without debugging, automating the tests etc., but this is enough to get us started:

A few points to note:

Don't forget to execute the Cleanup.dtsx task - I think one of the greater advantages of the new development environment is that it's much easier to collect all the bits and pieces of a project in a single place, be that packages, SQL scripts, documentation or what have you. One thing I'll certainly be using this for is performing a lot more full end-to-end tests.

Since you made it this far, I hope you've found some nuggets to take home, despite the somewhat introductory level. If you're really enthusiastic, you can check out and even run the packages by clicking download.

With this groundwork in place, look out for some meatier benchmarking articles coming down the line.

Kristian Wedberg is a Business Intelligence consultant living outside London, UK. He can be reached at this email address: trk2061 [at] wedberg.name

Disclaimer: Opinions and comments expressed herein are my own, and does not necessarily represent those of my employer.