Last week we visited how to use global variables in DTS.

This week we'll read a file from a directory and create a dialog box from the file's name.

This exercise is especially useful when you're reading a file from a directory to dyanmically set properties of a task or connection. 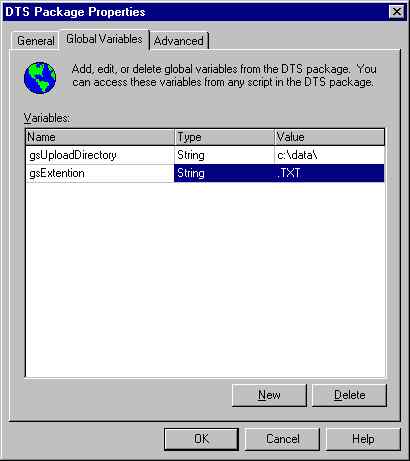 Below is the script in its entirety.

Let's go ahead and take this script apart. This first step is to declare your variables and create your objets.

Since we are using the FileSystemObject, we will create the object and use the variable

oFS to represent the object.

Since we are not making any changes to the package or its global variables, we will

not need the following line. However, I include this line for future expansion of the script:

We will now need a few variables to be set before we can continue. We will use

If you had 25 scripts all running in conjuction, without the use of global variables, you would have to change 25 scripts

location and allow it to be called from multiple scripts. A big time saver!

The GetFolder method will set which folder we will look in to retrieve the files.

Now that you have the folder set, the oFolder.Files method will list all the files in that folder.

You need to now loop through all the files in that directory that end with the extention .TXT and

perform an action on them. That is done through a For..Each loop. In the below code

we are looping through our files in the colFile array and loading a dialog box with the file name when found.

For Each oFile in colFile

Go ahead and execute the package. If all goes well, you should see the following:

Next week we will go into setting connections dynamically.

It gives you a background in the fundamentals and gets into the details of how to program in VBScript.

DTS is a fantastic ETL tool and it is often used to import Excel documents. However this can be a manual process in many cases in setting up the package. New author Sloan Holliday brings us a way that you can leverage Office XP's automation facilities and XML to import data into SQL Server.

Oracle is usually a dirty word in the SQL Server community, but like it or not, lots of data resides in Oracle databases. And SQL Server is often used to gather this data together in a warehouse of some sort for spinning cubes, generating reports, etc. Haidong Ji looks at the various methods that you can connect to an Oracle driver and compares the speed of each. If you need to get data from Oracle, or may need to, this is the place you want to start.

Joe has written some articles for us, he also some interesting comment on his site - this article looks at trapping errors such as timeouts or divide by zero.