Report development has been an important part of my job. In my 7 years of work experience I have come across many requirements for financial business reports. The financial reports are full of numbers, formulas, sub-total, totals, averages and many more things. In an earlier time it had been a challenge for me to display the sub-totals and the totals at different hierarchy level. e.g. display the amount invested under the different schemes of a product, total amount invested under a product and total amount invested across all products etc.

One day I was reading SQL books in my downtime and I found the GROUPING with ROLL UP function. This function does the job that I was doing in a very efficient way. In this article I will explain how to use the GROUPING function with ROLL UP operation to generate totals and sub-totals and return it as a query result.

I will refer to GROUPING with ROLL UP as GROUPING further in the article for simplicity.

The basic requirement for any query to execute is a table and data in that table. So let's first define a table named @GroupTest and then fill it with some sample data.

Our next step is to populate the @GroupTest table with some data. I prefer to use a WHILE loop and some mathematical operations instead of writing N number of individual INSERT statements. Execute the following query to load the data into the table.

Execute the following select query to check the populated data in the table.

Note: I avoided a ' * ' after the SELECT. Using the ' * ' is a bad practice. It brings down the performance of queries. Smaller tables will not have any problem, but as a table grows (in volume of data) it will be an issue. 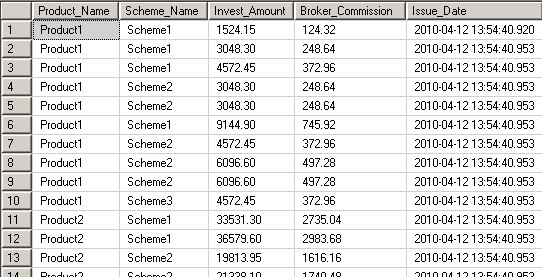 What do we need in the output?

We need a result set which will provide us the detail set of records, sub-totals and grand total. The output should show us the following:

The output should contain the investment amount totals as shown below:

This method doesn't use GROUPING function. The method uses four different queries combined with a UNION ALL clause.

Let's execute first query to get the individual records. This will list down investment done in each scheme.

The output of the above query is as follows:

The comment column is added to sort the records so that the Detail will appear first followed by the Total and Grand Total respectively.

Second query lists down the total amount invested in each scheme of each product. I mean here that the query will return a single row for Scheme 1 under each product with the total investment amount as 10669.05. It should be the similar for rest of the schemes in all products. A normal GROUP BY clause is used in the query.

The above query produces the following result:

The third query provides the amount invested at product level. Hence the investment amount for Product 1 will be the total of investment_amount of all schemes in Product 1, which is 30483.00

In the second column in place of the Scheme Name I have used a hard coded string value of 'ZTotal'. This will order the product level total row below the scheme total rows in the final query. If I leave the second column value as blank or NULL, the row will appear above all other rows. I found adding hard coded strings a simpler way to keep the row at the bottom. You will understand this when we put all these queries in a UNION.

This is the last query under Method 1. This query gives the total amount invested across all products. This is a Grand Total row for all of the output results above mentioned in Query 1, Query 2 and Query 3.

Putting all four queries in a UNION and getting final output

All the above four queries are put into a UNION clause as shown below.

This query produces the scheme level and product level totals as described in the section 'What do we need in the output?'. 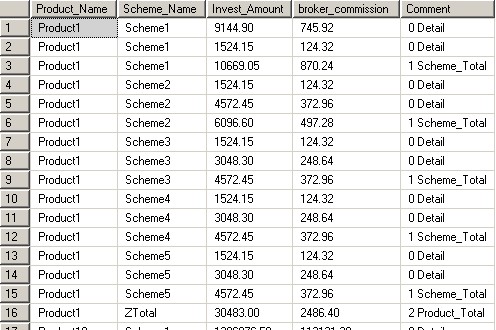 Look at the structure of the output. First an individual detail record is displayed. Then the Scheme_Total is displayed after it. Product_Total follows the Scheme_Total. The hard coded values 'ZProductTotal', 'ZTotal' and Comment column have helped to get the rows in this order.

Until now we have seen how to generate the Sub-totals, Totals and Grand Totals using normal queries with the GROUP BY clause. The same output can be produced using the GROUPING function with less code. The GROUPING function is used as an additional column in the query, and this function will render the output value as '1' for the grand total row and '0' for the rest. This means the row that contains the investment amount across all the products will have value '1' under the column denoted by the GROUPING function. The new query will be much simpler though we still have to use GROUP BY clause for the grouping purpose.

Two queries are combined with the UNION ALL operator to get the desired output. There is a slight difference in the output. The 'Comment' column has a numerical value instead of a string value as mentioned in the queries of Method 1 for the same purpose.

The output of the above query is as follows: 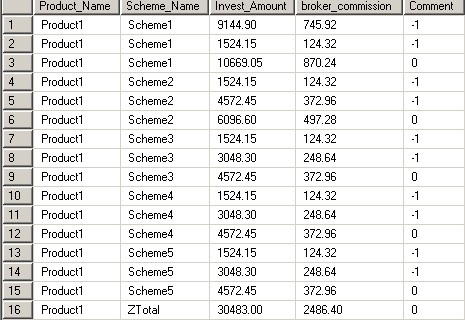 Grouping separates the NULL values that are returned by ROLL UP from normal null values. In the above example (Method 2) the Totals and the Grand Total rows are actually generated by the ROLL UP operation. ROLL UP adds the NULL value for the summary row. Grouping separates this NULL by indicating 1 against the row. Hence in the above output (Method 2) the Grand Total summary row is indicated by a 1.

Here one question comes in the mind that why only one row is indicated by 1? The Scheme_Total and Product_Total is also aggregated but it is not indicated by 1. I have not yet received any satisfactory answer for this. I will post the answer here once I get it.

If we don't specify the hard coded string 'ZProductTotal' and 'ZTotal' then the output will look like this screen shot.

The first row is the Grand Total where Product_Name is NULL. The second row is total for Product 1 where the Scheme_Name is NULL. This should help you to understand why I use hard coded strings.

How a simple SUM statement could change an output.

How to get monthly YTD data

This article presents an easy method to get YTD data grouped by months in T-SQL.

Script to calculate the Median value for SQL Server data

The standard SQL language has a number of aggregate functions like: SUM, MIN, MAX, AVG, but a common statistics function that SQL Server does not have is a built-in aggregate function for median. The median is the value that falls in the middle of a sorted resultset with equal parts that are smaller and equal parts that are greater. Since there is no built-in implementation for the median, the following is a simple solution I put together to find the median.

SQL Server database engine doesn't have a MEDIAN() aggregate function. This is probably because there are several types of median, such as statistical, financial or vector medians. Calculating Medians are essentially a row-positioning task, since medians are the middle value of an ordered result. Easy to do in SQL? Nope. Joe Celko explains why.