To summarise the article, until recently sp_prepexec was an undocumented stored procedure and even today very little documentation is available for it.

Given its undocumented nature and a natural DBA aversion to putting undocumented system procs in production systems I asked our developers to set the nHibernate configuration switch to use sp_executesql instead.

At this point a number of problems came to the fore which have been fixed as part of nHibernate V2.2

What I hope to cover here is not nHibernate but a write-up of the issues were found in the way that dynamic and parameterised SQL were called using sp_executeSQL.

Sp_executesql is fully documented both in books-online and MSDN.  Its purpose is to allow queries with the same signature but different parameter values to use the same query plan.

To show an example of this run the following code

Then run the following query

What you should see in the recordset with a line containing

In fact, as long as all we change is the parameter values sp_executeSQL will reuse this plan.

There are a couple of points to note with our query plan statement.

The significance of these figures will become apparent later.

Running our query plan statement  now reveals that we have two separate plans even though as human beings we can see the two queries are the same.

Again, running our query plan statement reveals that we now have 3 separate plans!

LESSON ONE:  The cache is case sensitive.

For nHibernate this isn't an issue as the objects are predefined and statements always follow the same pattern.  If your application developers do not use an ORM framework and call sp_executeSQL this is something to bear in mind.

What about stored procedures?

You can see that parameterised SQL is case sensitive but what about calls to stored procedures?

I ran the following T-SQL in the AdventureWorks database

Here you can see that the case in which the stored proc is called has no bearing on the number of entries in the proc cache.

If we run our query plan statement we will see two separate entries for our query.

LESSON TWO: A separate query plan will result if parameter sizes differ for what is essentially the same query.

Prior to nHibernate V2.2 this was a problem because nHibernate sized the parameters to the contents of the value being passed to it.

Why is this a problem?

Take a look at the variable length fields in the Adventureworks.Person.Address table.

Running the query below tells us that there are 1,320 possible variations of lengths for combinations of those fields in the table.

That is one query against one table!

Adventureworks is a small sample database with 71 tables so considering the different combinations of variable length fields for each table and the number of different queries that are to be run across the database you can soon see why the our proc cache starts to balloon into the GB range!

There is another problem associated with varying parameter sizes for what is essentially the same query.

Whenever a new query is run it has to pass through the cost based optimisation process. A simplified illustration of this process is shown by the diagram below. 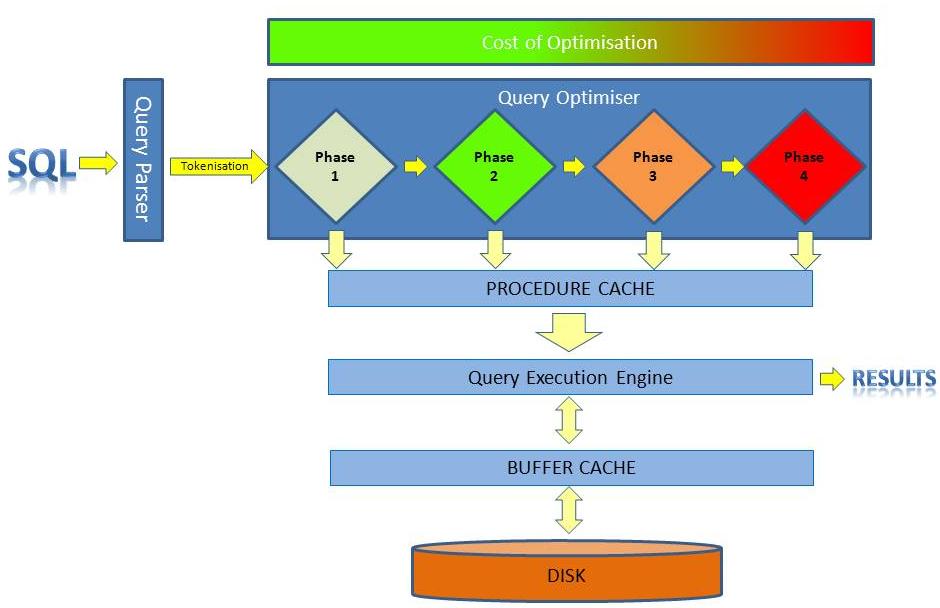 This is a phased process so if the query cost falls below the threshold for stage one then it that plan will be cached and executed.

There is a 3rd and 4th phase and obviously each phase gets progressively more expensive.  A colleague mentioned that he had seen a complex query take 17 seconds just to go through the optimisation process.

Most of the queries I have seen coming out of nHibernate are relatively straight forward and have had a modest cost but you still have the overhead of compiling the query prior to execution.

Why do we care about memory taken to story query plans?

I have often asked the question as to what is the optimum memory for a SQL Server instance and the answer always seems to be "as much as you can afford".

At this point it is a good idea to take a look at what SQL Server uses its memory for.  The principal items are as follows

Obviously memory is consumed by the operating system, CLR functions, full text index service, SSIS processes and a whole range of other things.

If you get proc cache bloat on a 32 bit server then to a certain extent this gets masked by the fact that the proc cache can't stray into AWE memory.  Effectively it is constrained to a 2GB maximum.

Switch to 64 Bit however and such constraints vanish and it will continue to grow as much as it needs to until it starts to eat into the buffer pool.

When this happens your server will start to show symptoms of coming under memory pressure.

What affect does query complexity have on the proc cache?

Query plans age out of the cache eventually based on an algorithm that checks when they were last used and how complex the plan was.

If you run a query on your development box tonight, check the existence of the execution plan and come back the next day then it will be gone by the morning.

Internally SQL Server is constantly cycling through the proc cache aging the items in the cache until they qualify for removal.

To summarise it all...

Based on a real fact, this article demonstrates how a bad use of sp_executesql can lead to unpleasant surprises

Why sp_prepare Isn’t as “Good” as sp_executesql for Performance