As organisations seek more cost efficient ways to manage their environments, the demand on IT to deliver and manage shops on a tighter budget is increasing. The typical IT person must think not just about what must be done but how it must be done not only with the least administrative effort but with the least financial cost.

Administrative effort indirectly contributes to financial cost when such factors such as time spent on performing tasks and resources employed in performing such administrative tasks are considered. In this article I have outlined a few areas where DBAs working in moderately sized environments can capitalise on to manage their environments more efficiently and more cost effectively.

Windows Authentication has the following advantages:

think the above approach or any variant is much easier than handling individual principals at SQL Server level. In addition, it can help pass Access Management to a non-DBA function entirely who will not need to access SQL Server frequently to do their job. 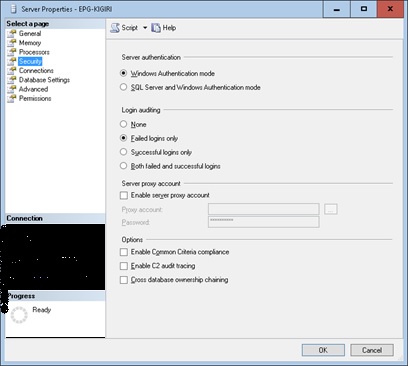 Central Management Servers (available since SQL Server 2008) allow you to designate an instance as a management server and subsequently add the connection information for other instances as Registered Servers to that instance. You can group Registered servers as you like and run queries on them as groups.

One good example of the usefulness of this utility is documenting your instances (assuming you are not using more advanced methods). You can run one simple query on your Registered Server Group and get output across instances as shown in Fig 2.

Fig 3 also shows how Central Management Servers can be used to perform adhoc maintenance tasks across instances. In Fig 4 we create an account across multiple instance and grant a role to this login within each database of each of the instances we loop through. You will find this useful if you, for example, want to create an account for monitoring or auditing purposes when using third party tools that must connect to the instance.

It is worth noting that when working in an environment where your database servers are behind firewalls, you should ensure that port 1433 (or any other port you have configured your instances to listen on) is open between the Central Management Server and the Registered Servers. The credentials you use to connect from the Central Management Server should have the required accesses on the Registered Servers.

In my experience building SQL Server failover clusters, I have always been more inclined to use Node and Disk Majority Quorum configuration simply because that is what I am used to. With the advent of AlwaysOn Availability Groups, we find that quorum configuration options are limited to Node Majority and Node and Fileshare majority.

When configuring AlwaysOn Availability Groups, It will be useful to designate a single low-spec server as your 'Quorum Share Server'. Create a number of shares on this server and grant permissions on the share to each clusters you install in your environment. You can manage and safeguard this single server from unintended reboots. You can take control of it as the DBA rather than for example depending on a share sitting on a Domain Controller.

For those who do not use or cannot afford enterprise backup solutions, one would often notice DBAs taking backups to a disk on the same server where the SQL instance is sitting. This is to say the least, RISKY. That means risky in UPPER case. It is even more risky if you are not using a SAN.

When in this situation, it would be a good idea to setup a share on a File Share server and grant permissions to the share to the SQL Server Service accounts across your enterprise. When configuring your backup jobs, simply use the share as your backup location. Below is a sample script.

5. Use Operators and Alerts

Operators are aliases for a group of people who receive alerts from a SQL Server instance. Alerts can be triggered by server conditions as well as jobs. When an alert is raised and Database Mail has been configured correctly, the alert is fired as an email to the Operators defined and mapped to the specific alert. Using Operators and Alerts can replace the need for a third party monitoring tool assuming your shop is not too large and you wish to save some money on monitoring. With details planning, standardization Operators and Alerts can go a very long way in meeting monitoring requirements.

SQL Server ships with a wide variety of in-built features that can be harnessed creatively to cut down your financial and administrative costs significantly. This article simply points out a few key areas which will be useful especially to not-so-large organisations.

Cloud Storage Security: Are You Doing Your Part?

If the level cloud storage encryption are so high, then why is the cloud security industry experiencing such distrust?

Understanding and dealing with orphaned users in a SQL Server database

Attaching and restoring databases from one server instance to another are common tasks executed by a DBA. After attaching or restoring of a database, previously created and configured logins in that database do not provide access. This tip looks at how to deal with this.

A monster book at 980 pages, it's written in 'how-to' format and has a ton of good material. Andy gave it the once over for us and reports back - see what he thinks!