In our Enterprise Data Warehouse (EDW) environment, exact copies of many source systems exist. We pull over tables exactly as they exist in the upstream clinical systems. When a clinical system is upgraded, there are often numerous changes that occur in its database including new tables being created, tables being dropped, column types changing, columns being deprecated, etc. These changes are reflected in our EDW.

Our power user community writes SSRS reports against these tables within our EDW. Many reports will break in one way or another after a clinical system is upgraded.

Many SSRS reports will break in one way or another after a clinical system is upgraded and its database changes are reflected in our EDW.

A discrete list of database objects referenced by each report will be created (e.g. Report X references tables X, Y, and Z).

Since the vendor provides release notes and a copy of the new version exists in a test environment, the upcoming database changes have already been identified. Knowing the list of tables that have changed, we'd like to identify any reports that reference a table in that list.

This approach will be covered in four steps:

The source query for pulling report data from our Report Server is simply the following:

Note: Microsoft promotes using web services to interact with the report catalog rather than hitting the database directly.

Now that a copy of the report catalog exists in our EDW complete with an XML column storing the report's RDL, SQL Server's built-in XML capabilities make it relatively easy to extract a report's T-SQL. The table that now stores the report data is called metadata.reports.

The T-SQL below shows using the XML nodes() method to return each DataSet in a report as a row of data. The XML value() method is then used to pull out pieces of each DataSet's XML notably the source query in the CommandText column.

Now that each DataSet's query has been extracted, it's time to mine that text to pull out any string that resembles a database object.

Step 3: Extract Any String that Resembles a Database Object

A colleague of mine, Eric Just, developed an open source SSIS Data Flow Task component named RegExtractor (http://regextractor.codeplex.com/). The component "allows you to define a regular expression with captured matches (backreferences) that you can apply to a column in your data flow. The captured matches are output as new columns in the data flow."

So, the regular expression used in this case looks for any string that could resemble a database object in the form of: database_name.schema_name.object_name. This will cast a wide net and pull out many strings that are not actually database objects.

RegExtractor will process a SQL statement and output three columns for any strings that match the regular expression: database_nm, schema_nm, and object_nm.

As an example, let's assume the following query has been used in a report titled Employee Pay to extract a list of employees from AdventureWorks and their current pay rate:

The regular expression above would pull out rows similar to the following:

A picture of the SSIS Data Flow Task using RegExtractor in our production environment is shown below. A total of 3,367 SSRS DataSet queries were processed resulting in over a 116,000 possible references to database objects. 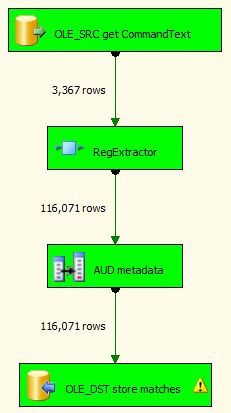 Now that a wide net has been cast to pull out strings matching the regular expression noted above, the next step is to compare each string to actual database objects and only keep those that match.

Using RegExtractor in the previous step, a table now exists that lists possible objects found in our SSRS DataSet queries. An inner join to the system catalog views in the current database will return a list of potential objects that are matched to real objects.

For illustration purposes, the AdventureWorks query in Step 3 will be used in the sample below. The sample below sets up a table variable to hold our list of potential database objects extracted from the AdventureWorks query. That list of potential objects is matched to actual objects based on the schema name and object name as found in SQL Server's catalog views.

Using SSIS, basic SQL, and an open source component, it's possible to extract a reasonably accurate list of objects from reports. This allows us to perform tasks such as:

While this approach has worked well in our environment, there are some limitations noted below.

Despite these limitations, this approach took less than a day to implement and added a lot of value in understanding objects referenced by reports. Future enhancements will improve the accuracy of pulling objects from SSRS report queries.

A guide for getting around the missing data driven subscription feature in Standard editions of Microsoft SQL Server.

Gantt charting for the holidays

Gantt charts in SSRS aren’t included in the 2005 release. You can purchase a third-party add-on or, if you can wait, these powerful project tools might make it in the 2008 release. Alternatively, you can do this now with the native RS Chart control by using the methods David Leibowitz provides.